Can the Vibrant Development Environment Save California From a Recession? Part 1

The California economy has effectively, recovered from the pandemic recession of 2020. A faster return to normalcy has been evident from the economic reports that monitor business activity in the regions, including the labor markets, spending trends by consumers, tourism, the housing sector and new development.

Last month, I presented evidence showing that the California economy is anything but weak. Through August, there is very little trauma visible to date in the state.

But the impending recession now haunting the nation threatens to slow down California in 2023.  And that particular topic has been the general subject of these monthly newsletters all during 2022.

Amid pressing economic problems that have emerged in the form of product shortages, higher energy and food prices (and broader inflation in general), labor and capital resources are still being utilized near capacity. Real estate asset valuations remain at or near record levels, and don’t yet appear to be impacted by the higher interest rate environment.

New development of commercial, industrial, and residential structures has always been a key sector of growth for particular regions of California. And while the pandemic interrupted much of this flow in 2020, development activity was fully restored by mid-2021.  This year, the development momentum has surged in California with much of it is due to the insatiable demand for rental housing and industrial facilities.

Furthermore, because of the Federal Infrastructure bill passed last November, Federal grants to all the states, the fat California budget surplus, and SB 1 funding, billions of dollars have been allocated to infrastructure this year and over the next 5 years.1

Residential development this year is occurring at a pace that will generate the largest volume of homes started since 2006.  The value of commercial and industrial structures started in 2022 is the highest on record.

The surge in private and public sector development will persist into next year, and help minimize the trauma of recession.  If we are lucky, there’s a chance that the state might entirely elude recession. 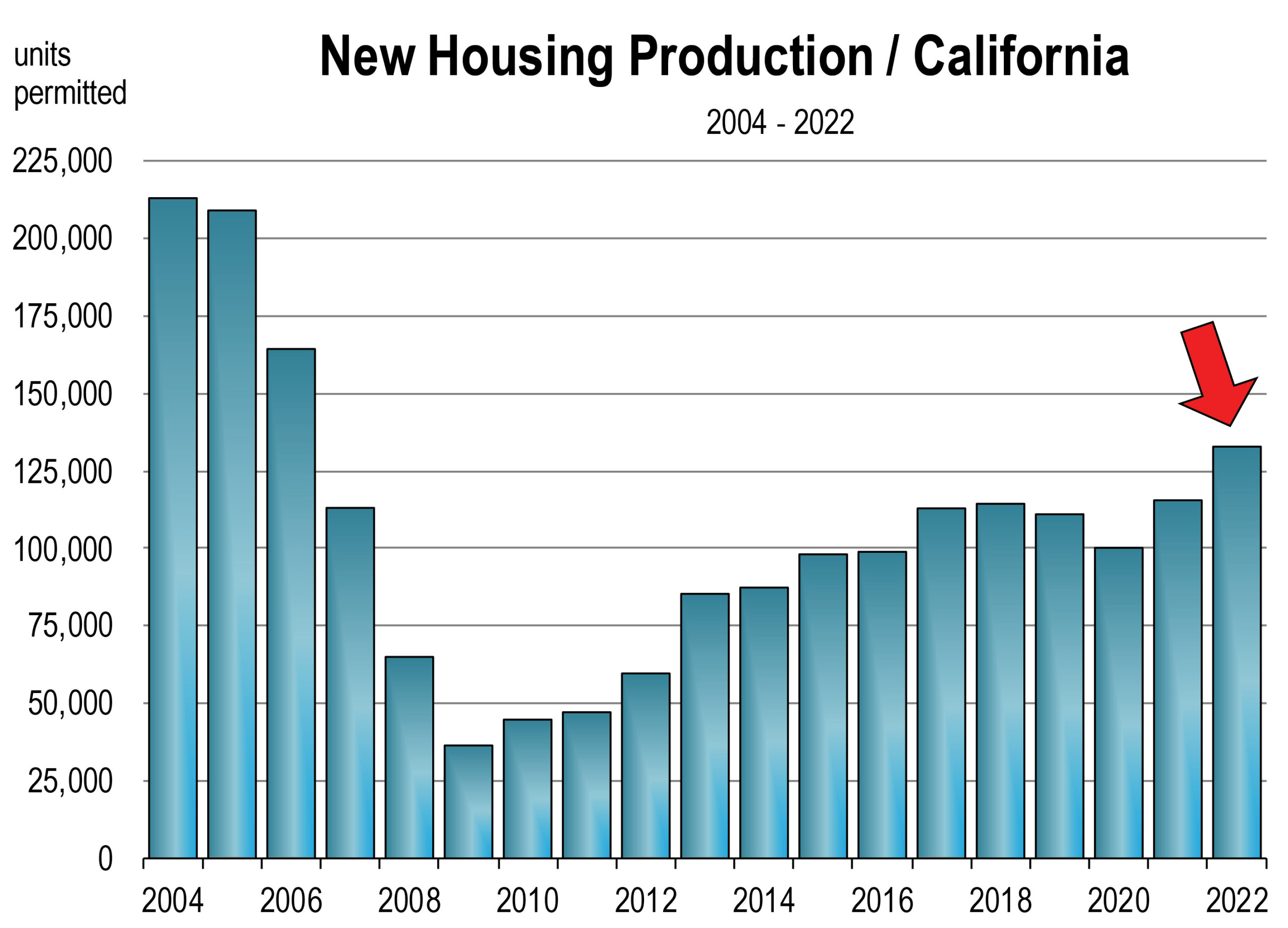 Development is occurring in all major regions throughout the state, and in particular, the dense metro areas, the Inland Empire, and the Central Valley.

The degree of ongoing development underway and proposed development in California has significant implications for population growth in many regions, and/or substantial economic stimulus in others.

In light of current demand, the need for facilities is going to persist, and the massive development of started projects can well be immediately utilized upon delivery. Tens of thousands of new job opportunities during the current decade are practically guaranteed in the state. 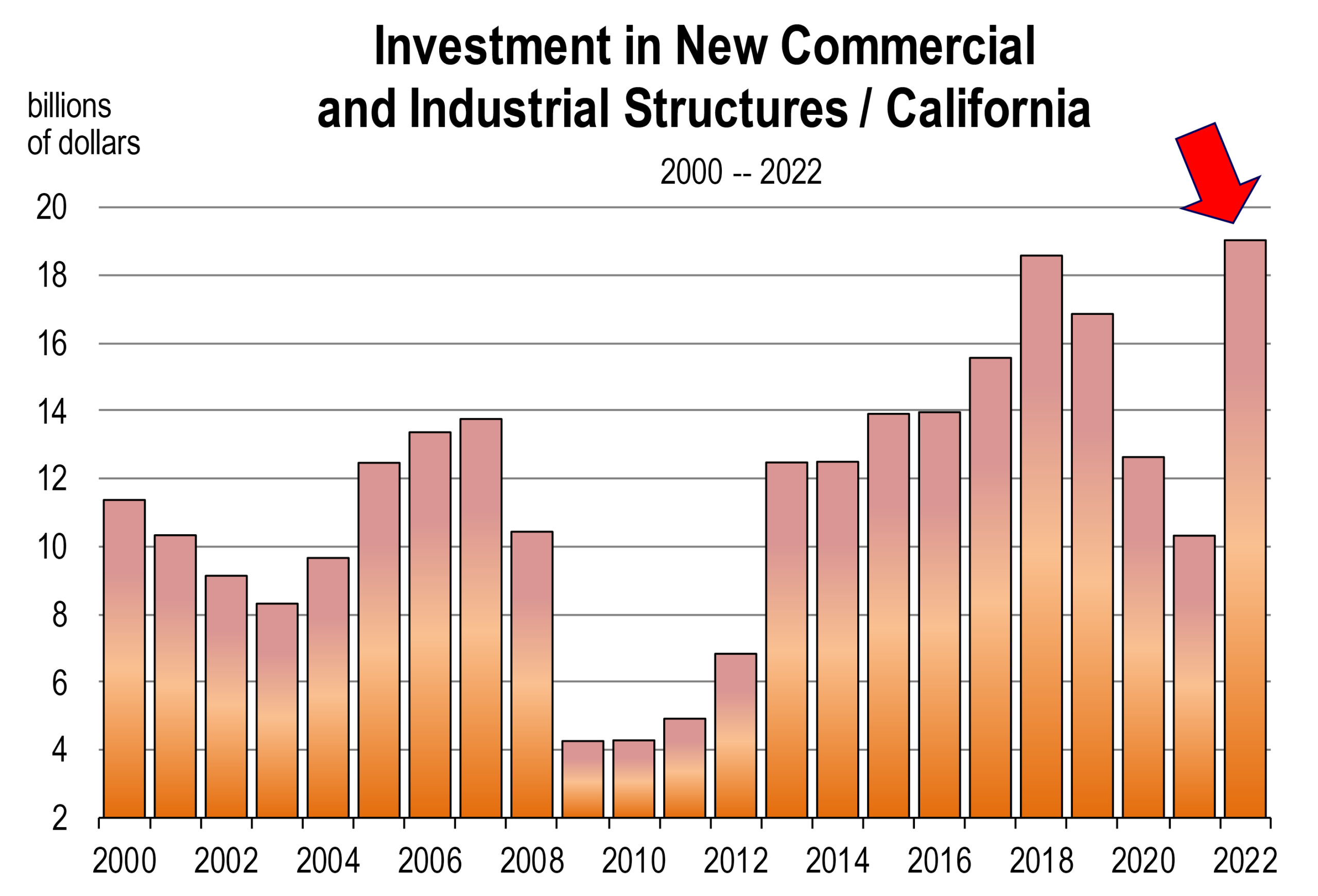 A summary of some of the highest profile projects are presented here, which illustrates the type, scope and location of real estate development in California today.

The largest state highway project, the $2.1-billion widening of Interstate 405 through Orange County, has an estimated expenditure of about $1 million per day with 1,000 union jobs on site. Completion is expected in 2023.

Nine hotels totaling 2,000 rooms opened in 2021. The county has 70 hotels totaling 12,204 rooms currently in planning. Disney is conceptually planning to broadly expand both Anaheim parks as part of a grand project called DisneylandForward.

Rancho Mission Viejo, the mega development in Southern Orange County, is one of the largest residential projects in all of Southern California. Several of the project’s neighborhoods are already built and occupied, but the entire project will contain 14,000 homes.

The principal region for new housing development is Chula Vista and the surrounding unincorporated area. Residential development in the Otay community planning area and the Otay Ranch in Chula Vista is entitled for 20,428 housing units. Building has just gotten underway.

The affordability of the region, its relative proximity to the Ports of LA and Long Beach, and available land underlies the reason for soaring levels of investment in land, warehouses, offices, hotels, and solar farms in the Inland Empire.

The massive 15,663 home Tapestry development broke ground in 2021. The project also includes 700,000 square feet of retail and commercial space. The project will accommodate an additional population of 40,000 people in the City of Hesperia.

The Riverside City Council approved a housing plan to augment the housing stock by 21,000 homes by 2030.

Newmark estimates that 33.3 million square feet of industrial space is under construction across the Inland Empire in 2022.

Massive solar projects are either underway or in planning. The 650 MW Daggett Solar facility will be the largest in California and power 200,000 homes.

The Coachella Valley is now the most sought after location in the Inland Empire for new development and in particular, projects supporting the expansion of tourism. There are more than ten thousand homes approved or in planning in La Quinta, Palm Springs, Palm Desert, and Rancho Mirage.

The $5.5 billion automated people mover train system, transportation hub and new car rental facility at Los Angeles International Airport is being built in four years, resulting in a burn rate of $4 million per day. It employs 3,450 workers today, and will be completed in 2023.

The largest mixed use development project in California is underway in downtown Los Angeles. Named “The Grand,” The $1 billion development is scheduled to open in 2023 with 176,000 square feet of creative retail space, 436 apartments, a 309 room hotel, parking for 1,000 vehicles, and a movie theatre complex spanning a full city block on Grand Avenue.

The largest residential project under construction in California is FivePoint Valencia (previously known as Newhall Ranch). Developed by FivePoint Communities, the total project includes 21,242 homes and 11.5 million square feet of office, retail, industrial, recreational, school, and public space. The 4,055 unit Mission Village is the first of the 5 communities that is now underway.

Centennial, the Tejon Ranch development at the northernmost boundary of Los Angeles County and Kern County is approved for 19,300 homes. The project has been delayed for decades by environmental and climate concern lawsuits. Eighteen percent of the homes will be affordable, and all will be zero-emission. Centennial is estimated to accommodate a population of 57,000 residents. 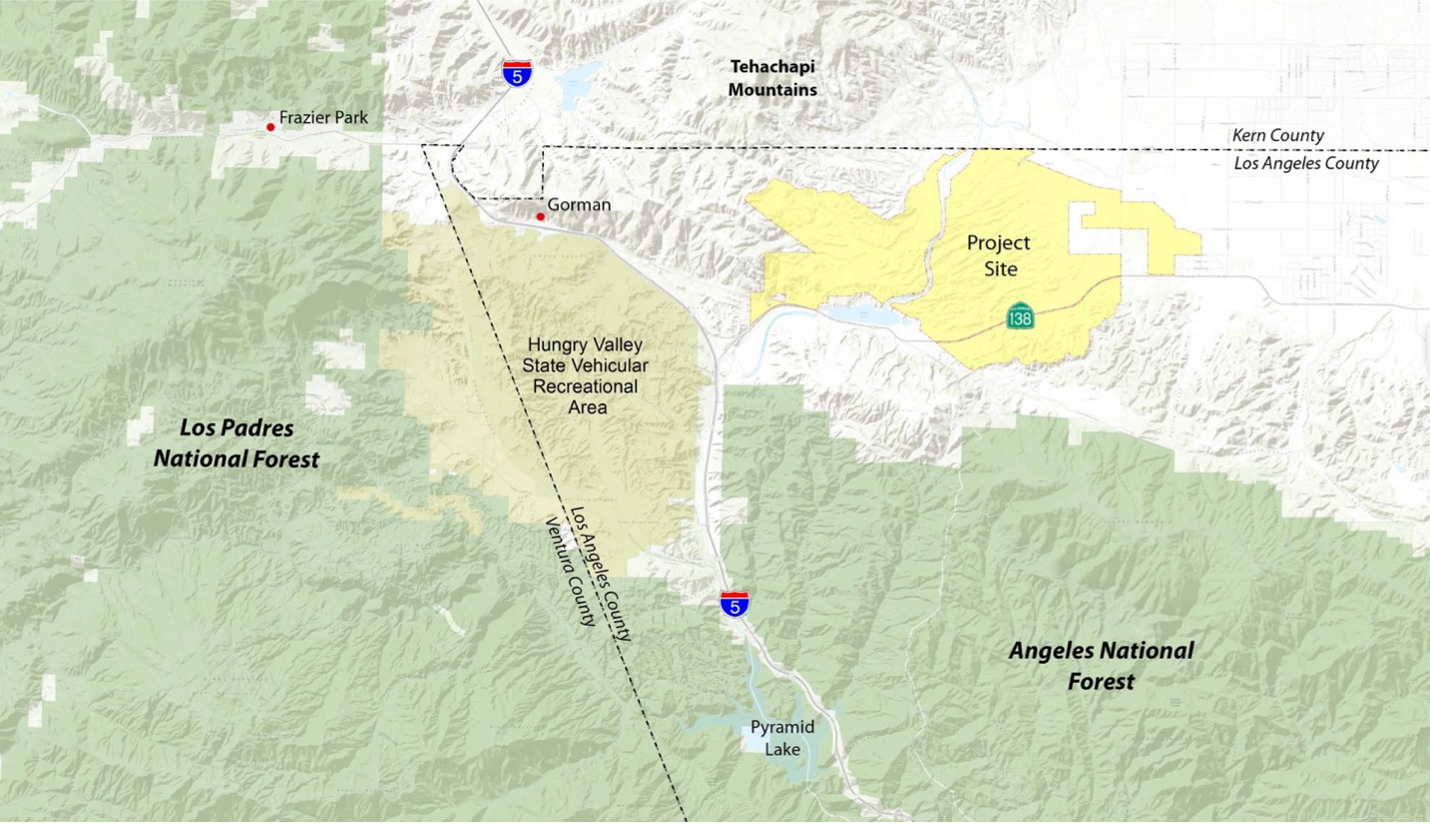 1$4.9 billion is in the current year’s state budget general fund. SB 1 provides $5 billion in transportation funding annually that is shared equally between state and local agencies for road projects,  The 5 year Infrastructure Plan proposes $44 billion in new transportation investment over the 2022 to 2027 period, averaging approximately $9 billion per year.