So if we now have a “full employment” economy, why aren’t you convinced?

Is the unemployment rate really full?

We are now at or within months of an economy at “full employment.” This means that (1) anyone wanting a job can obtain one, and (2) labor is tight and the general level of wages and salaries is rising as a result. Evaluation of the data on unemployment, help wanted indices, and wage increases shows that both of these criteria are now being met. 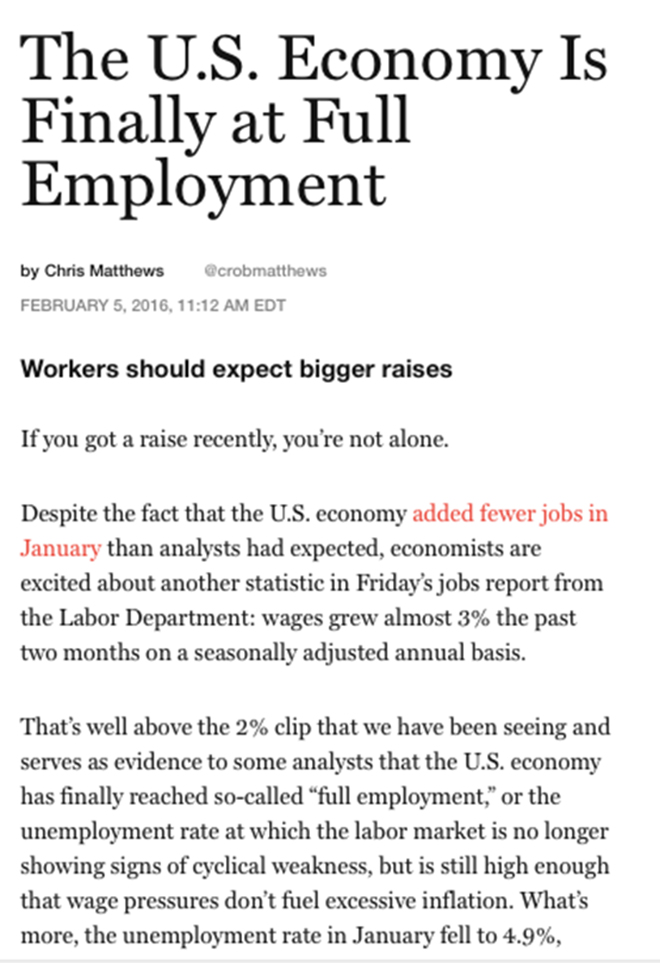 Is it really fair to use the term “full employment” when people are still experiencing difficulty finding work?

Unemployment is both regional and variant by age. The rate in Tulare County last month was nearly 10.7 percent. In San Mateo County, it was 3.2 percent. If you’re 19 and fresh out of high school, it’s going to be a lot tougher than if you’re 41 with 15 years of work experience. 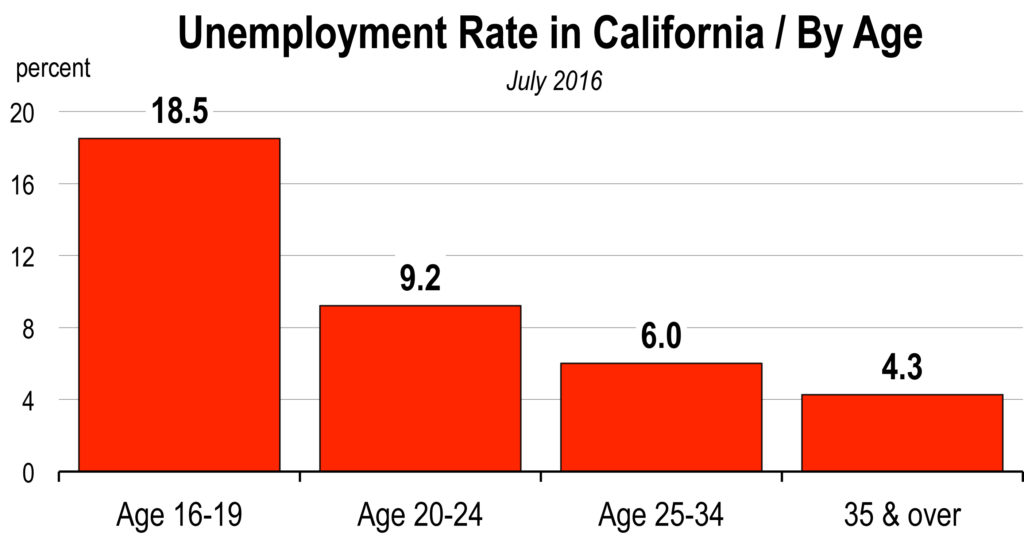 A discouraged worker is a person of legal employment age who is not actively seeking employment or who has not found suitable employment after long-term unemployment. This is usually because an individual has given up looking or has had no success in finding a job, hence the term “discouraged.”

Often the conventional unemployment rate is criticized because it does not account for discouraged workers that have dropped out of the labor force and are therefore, not counted in the unemployment rate.

Often we are criticized for declaring that full employment has been reached in particular regional economies since people believe that there is still a significant level of “underemployment.”

An alternative measure which seeks to explain underemployment is called the U6 unemployment rate. It expands the definition of the labor force to include “discouraged workers,” or people without jobs who have given up looking for work; “marginally attached workers,” or people without jobs who would like to work but have not sought employment recently, plus people employed part time (less than 35 hours/week) who would prefer to work full time.

Now, U-6 does not fully explain “underemployment” because there is no statistic that can quantify workers who are working in jobs below their perceived skill level. Therefore we don’t have a perfect measure for underemployment.

U-6 for August 2016 was 9.7 percent, or approximately twice the conventional unemployment rate of 4.9 percent. But U-6 has always been at a level that is approximately twice the conventional rate. Since 2008, the average difference between the two rates has been 6.2 percentage points. Today the difference is 4.8 percentage points.

While it is true that U-6 today is not quite back to the low level of 8.4 percent that prevailed prior to the Great Recession, neither is the conventional unemployment rate. Nevertheless, we are at or close to full employment and the U-6 rate today is consistent with historically low levels of that measure.

Who are the unemployed and the underemployed today?

The legal working age population ages 16 to 24 is the principal group that is either out of work or underemployed. The unemployment rate for this age group is currently 9.2 percent (versus 4.3 percent for the 25 to 54 year old age group). 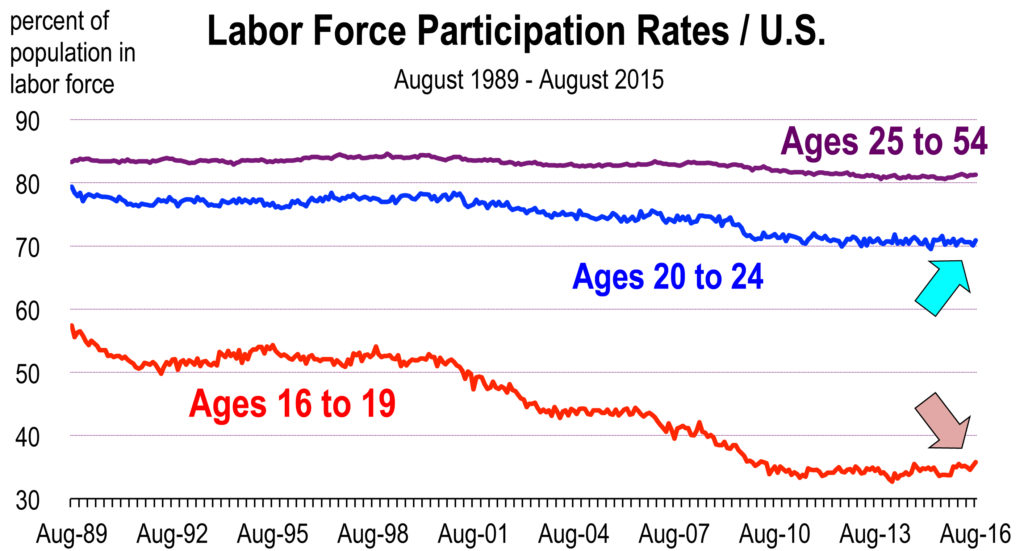 Higher rates of unemployment and lower participation rates for 16 to 19 and 20 to 24 year olds is consistent with their lack of training, knowledge or skill in a modern technical and highly automated economy where these attributes have much higher value today than previously.

Moreover, labor force participation rates for the population aged 55 and over have been increasing for the past 24 years and are now at their highest levels since 1964. The older Baby Boom generation is educated, experienced, and skilled. They show very little sign of being discouraged in today’s economy, according to this statistic. Oh, and their unemployment rate in August was only 3.5 percent, the lowest of any age group. 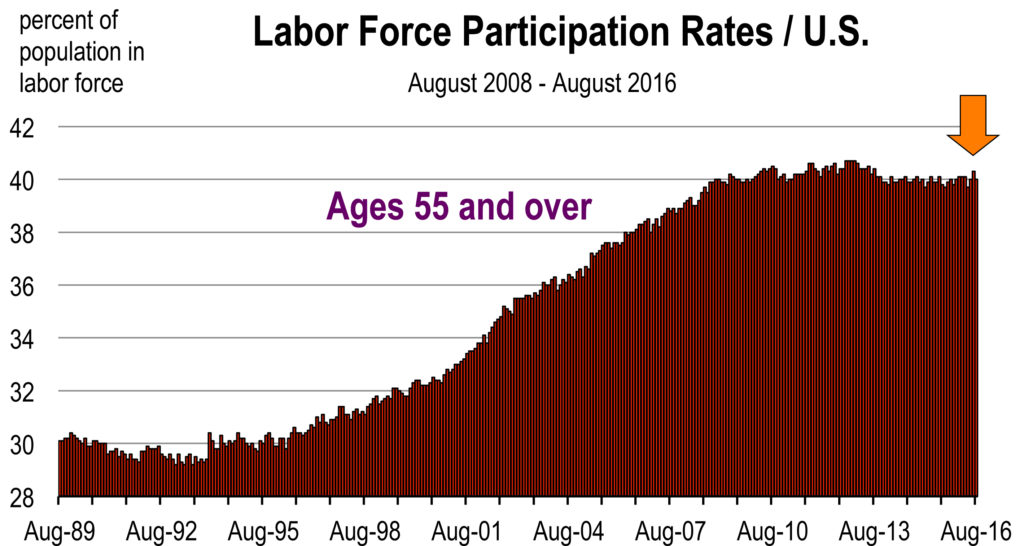 Unemployment is low for most of the labor force aged 25 and above. And the rate of unemployment appears to be both full and absent any unusual degree of underemployment for this age group. Baby Boomers are not the discouraged workers in today’s economy.

The rate of unemployment and underemployment is substantially higher for 16 to 24 year olds. The implications of this strongly support the critical need for higher levels of education and/or training of this age group, today and going forward.

It’s not enough to simply attend a university today and obtain a Bachelor’s degree. The kind of degree that students seek will have a much bigger impact on their employability and their future earnings than it did for the Baby Boomers.