When are Gasoline Prices Returning to Normal?

A note on general inflation

Inflation remains the biggest concern for Americans now. This is why the Fed is raising interest rates so aggressively and why the business cycle is therefore on the eve of destruction—I mean recession.

The Fed needs to restore price stability. That is their principal objective, along with promoting a goal of full employment.  Right now, full employment is present, though rising unemployment is a natural consequence of an economic slowdown. We’ve not yet observed that yet.  For the time being, the Fed is on a single mission.

The only way to reduce rising prices of goods and services is to reduce spending.

Rising interest rates will (and have) effectively dampened demand for housing and for consumer and business loans.

An increase in the supply of many goods will also have a depressing effect on prices, since “shortages” in some goods have resulted in rising prices of these goods.  However, consumers, facing an economy on the verge of recession, will still have to demand these goods in order for producers to ramp up their supply.

One of these goods is gasoline. The supply of gasoline would expand by increasing the production of oil in the world.  And since there are few substitutes for oil and gasoline, producers don’t have to worry too much about having their increased production consumed.

Increases in the production of oil in the world can occur by convincing OPEC to produce more. Clearly, the current Administration failed to do that when President Biden visited Saudi Arabia during the summer with that goal in mind. OPEC originally agreed to produce more, but they changed their minds and in October, decided to reduce oil production by 2 million barrels per day starting this month.

What would be best for the current economy is for the U.S—the largest producer of oil in the world—to ramp up production to the same level as in 2019 which represented the peak in U.S. oil output.  We have the resources, the capacity, and the technology to do so. 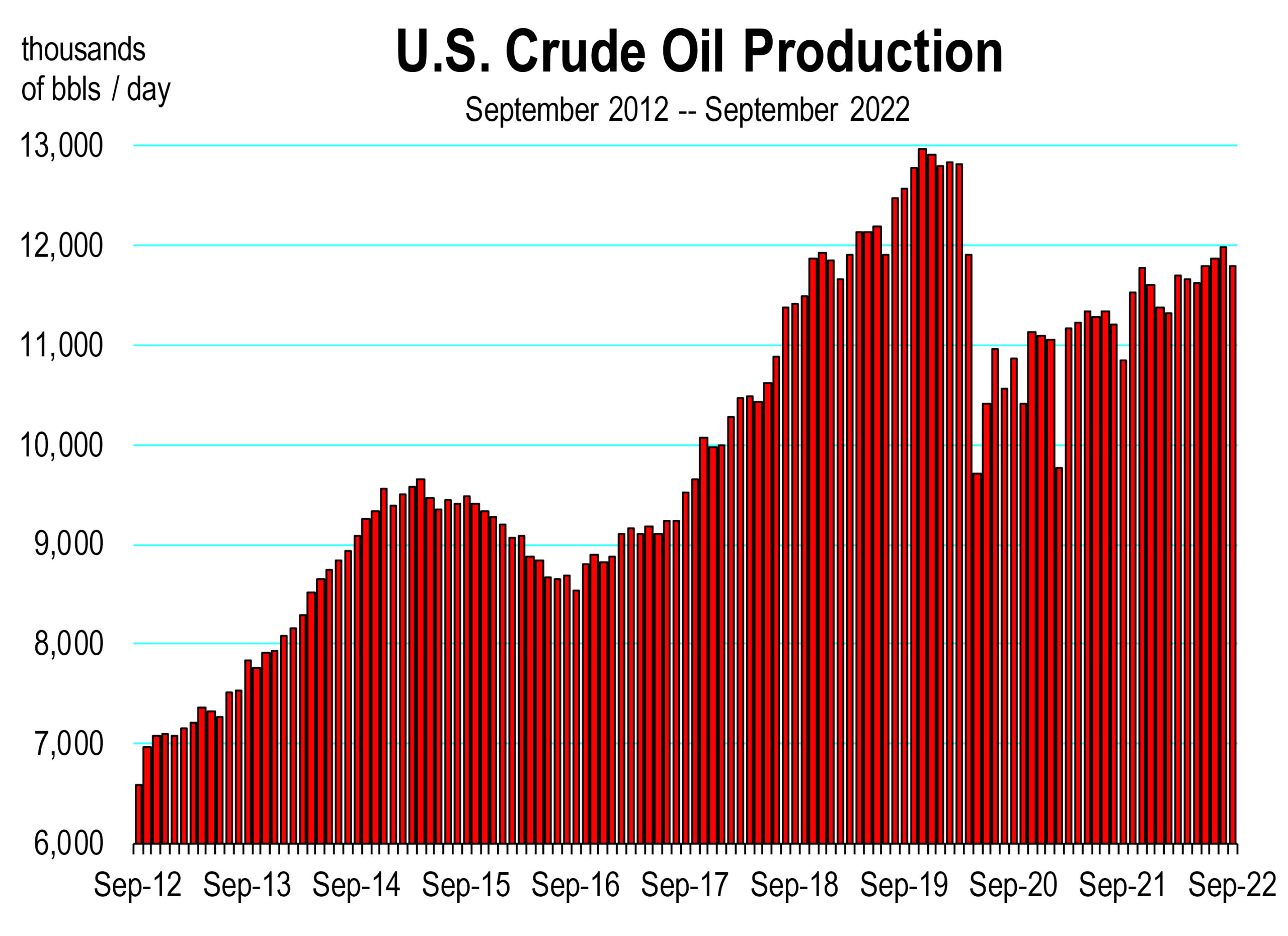 When the pandemic hit in 2020, demand was severely dampened as business and travel was shuttered or severely restricted worldwide. Consequently, production was curtailed, both by the U.S. and OPEC+. Coming off 2020 to the return of most economic activity, production responded to rising crude oil prices with higher volumes but only marginally. Because current U.S. energy policy now in place since the start of 2021 has become more restrictive on oil producers, the 2019 level of production has not been forthcoming. Steady or increased demand together with curtailed supply equals higher oil prices.

Both futures and spot prices of oil have climbed sharply in anticipation of current and future restrictive supply due to cancelation of the Keystone pipeline, the suspension of leases in the Artic Refuge of Alaska, and the cancellation of oil and gas lease sales in Alaska and the Gulf of Mexico.

The President had entirely suspended new leasing on federal lands and waters just a week after taking office, but a Louisiana judge ordered sales to resume in the Spring of 2022. So the administration increased royalty rates by 50 percent on all new federal leases beginning in April of this year. 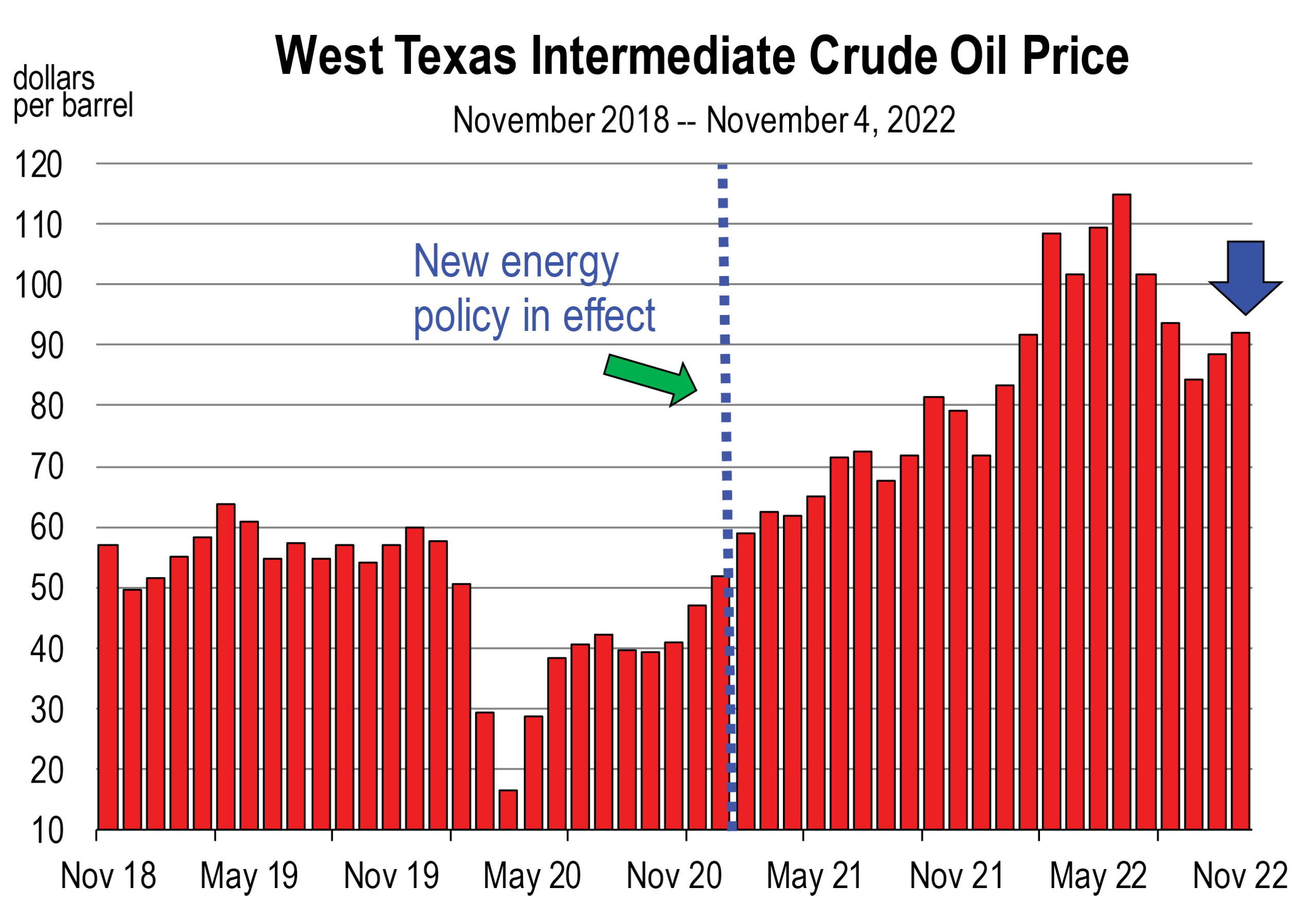 When a good has few substitutes, it only takes small declines in output to meaningfully influence the price.  With the onset of sharply lower production, the price of oil has soared, from $50 in January 2021 to $122 in early June. It has retreated to $92 today bit the U.S. Energy Administration forecasts an oil price of $95 in 2023. Oil and gasoline prices will go even higher next year if demand remains strong because supply is not forecast to expand.

But unfortunately, both of these scenarios is unlikely anytime soon.