Californians are ready to have the current set of business limitations rescinded on June 15.

On June 4, we received surprising news from the Governor of California. Newsome wants to maintain the emergency order and some capacity constraints on businesses even after June 15. We don’t know what those are yet. But let’s assume that on June 15 the blueprint regimen will be ditched and nearly all constraints on business will be lifted.

Lifting restrictions in California would align with what nearly all states have done to date.

Vaccinated people will no longer need to wear masks in most situations, aligning the state with CDC guidelines. Unless vaccinated, you will need to wear a mask at work.

In general however, we believe the economic-related restrictions will end this month, and that’s sooner than we all thought just a couple of months ago.

Given that the demand for travel is now soaring, we are expecting a fairly fast return to a normal economy, though employment levels associated with the leisure, recreation, hospitality, and amusement sector will unlikely return to pre-pandemic levels until late next year or even beyond.

This is because technology will have eliminated many of these jobs with automated alternatives, or businesses suffered permanent closure. 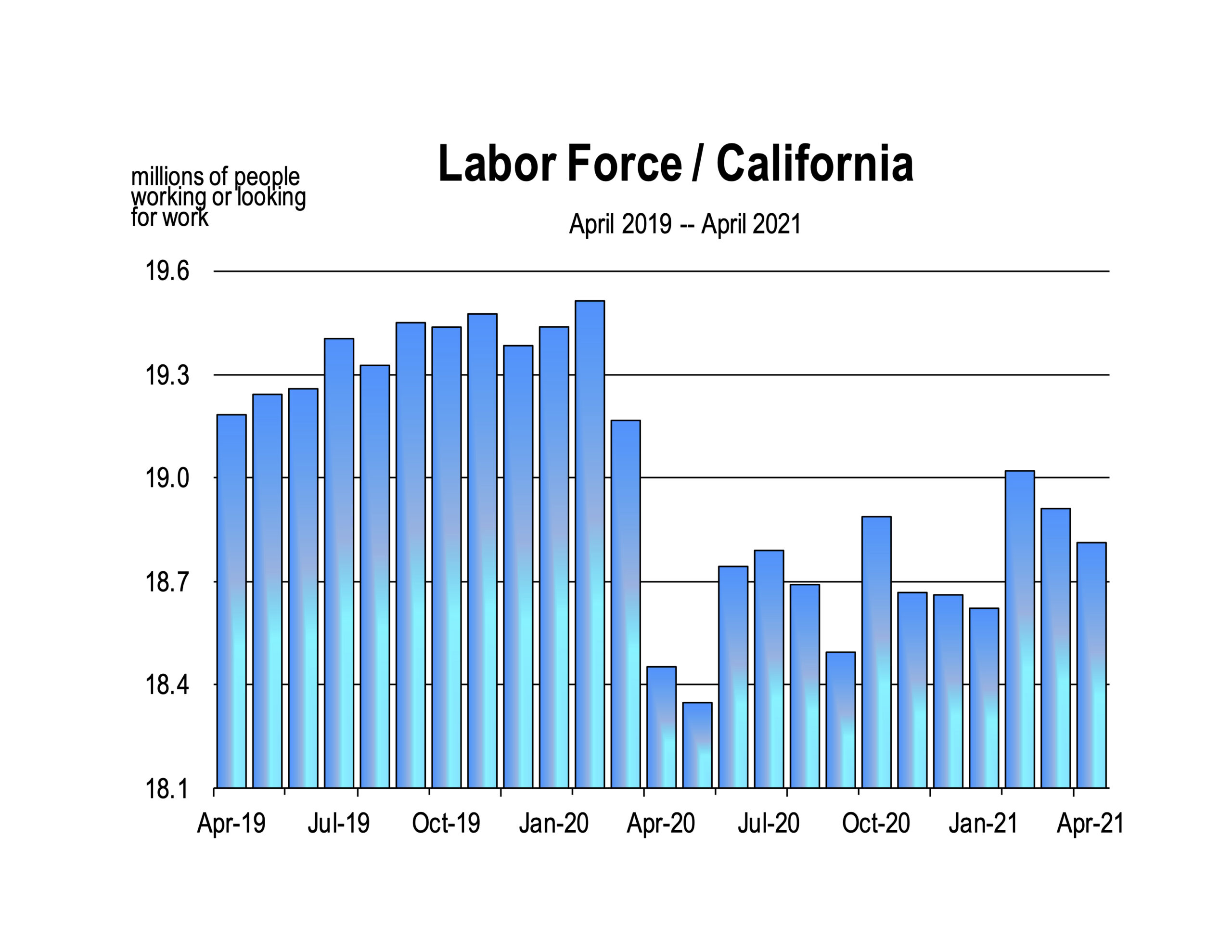 What will be different?

Restaurant jobs will be hard to fill immediately, and perhaps this condition will persist for much of this year.

The state is off 1.3 million jobs since February of 2020, the last full month before the pandemic shut down the economy. It will take some time to recover those jobs, especially if the labor force needs to bulk up to accommodate job openings. And the labor force should expand when the bonus unemployment benefits expire in September and school resumes at the same time.

Remember, the labor force is the population that is 16 and over and is either working or looking for work. 400,000 Californians who were in the labor force a year ago are not today. We expect them to slowly return. The labor force had shrunk for most of 2020 due largely to constraints on families to care for children not in school. Schools will reopen for the Fall 2021 quarter or semester and this will produce a surge of hiring in the education sector of the state.

Colleges and universities also open which will increase economic growth in student communities all over California. The return of students to college campuses represents a meaningful boost to food services, transportation services, and all personal services throughout California. 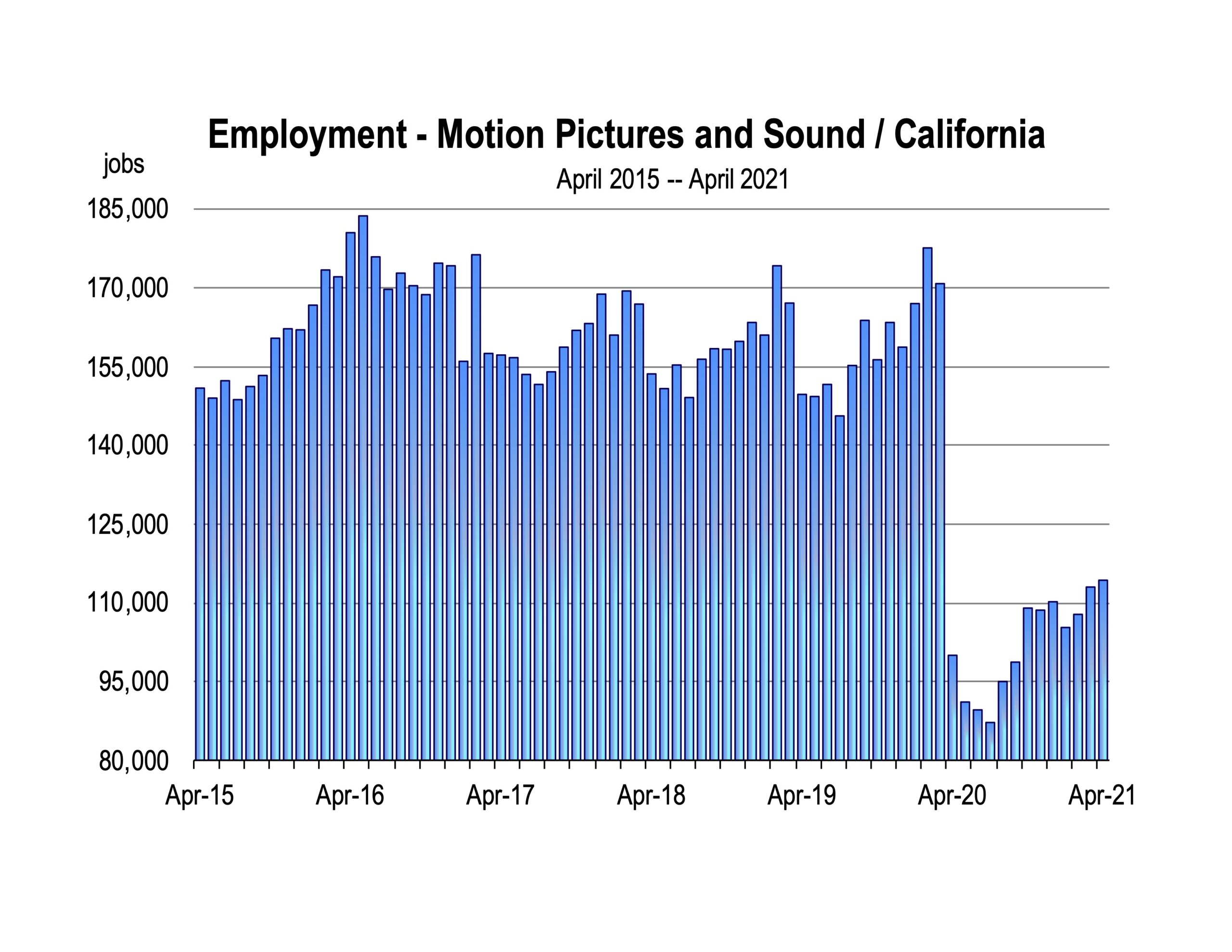 As the labor force rebounds, so will jobs in food services, hospitality and entertainment. As international travel resumes, larger gains are expected.

Filming in California was shut down sharply during the pandemic. There was an average of 309 days of filming per month in the Los Angeles region during 2019 and 1,126 days of TV filming. Between April and June of 2020 there were 3 film days and 52 Television shoot days. Conditions did not improve much in the third quarter.

Then film and TV work resumed sharply in the 4th quarter of 2020, but employment in the film sector remains devastated, and through April of this year, has not come back much. The industry is 60,000 jobs short of where it was in February 2020.

Film and TV production activity has now returned. The opening of California will enable the film and TV industry to normalize its operations again. Film permits and filming days are soaring this quarter and should continue for the remainder of the year.

The construction sector never really stopped, except for perhaps the first month of the pandemic. Job levels are nearly back to normal. 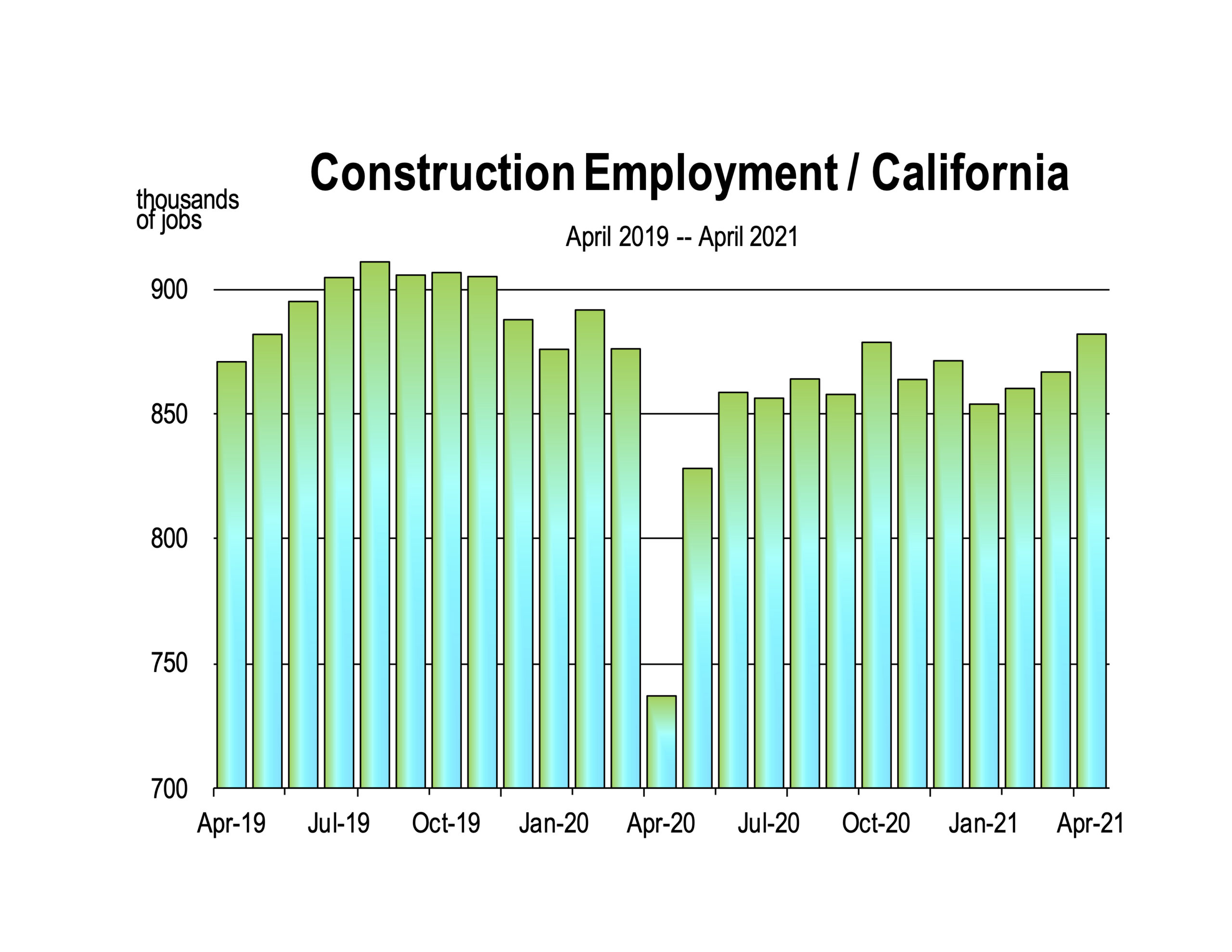 New construction is underway all over Los Angeles, including LAX. The high-speed rail project continued through the pandemic and employs more workers now than at any other time. Large multi-family building projects have resumed in San Francisco and Sacramento. In downtown Los Angeles, they never stopped.

Even hotel projects are back after the pipeline for new projects slowed way down in 2020. Hotels in the U.S. suddenly had more guests over the Memorial Day weekend than at any other point during the pandemic, and exceeding Memorial Day 2019.

The 400 room Margaritaville Resort in Palm Springs opened last Fall. But many more large hotel projects are either underway or planned in the Coachella Valley. The Seabird Resort in Oceanside just opened with 387 rooms along 700 feet of beachfront.

The historic Breaker’s Hotel in Long Beach is currently undergoing a $150 million renovation.

U.S. Employment Report for May

Last Friday, the BLS reported on the U.S. May labor market and its progress. There were lots of new jobs created but less than what economists expected. And it likely means that the May report for California will also be disappointing when announced later this month. California’s employment reports have been worse than other states and the nation in general over the last year. But look for catch-up to occur with a surge in jobs this summer and beyond as restrictions end and schools resume.

The resumption of schools is critical to California’s public sector education workforce which has been effectively quarantined for the last 15 months. 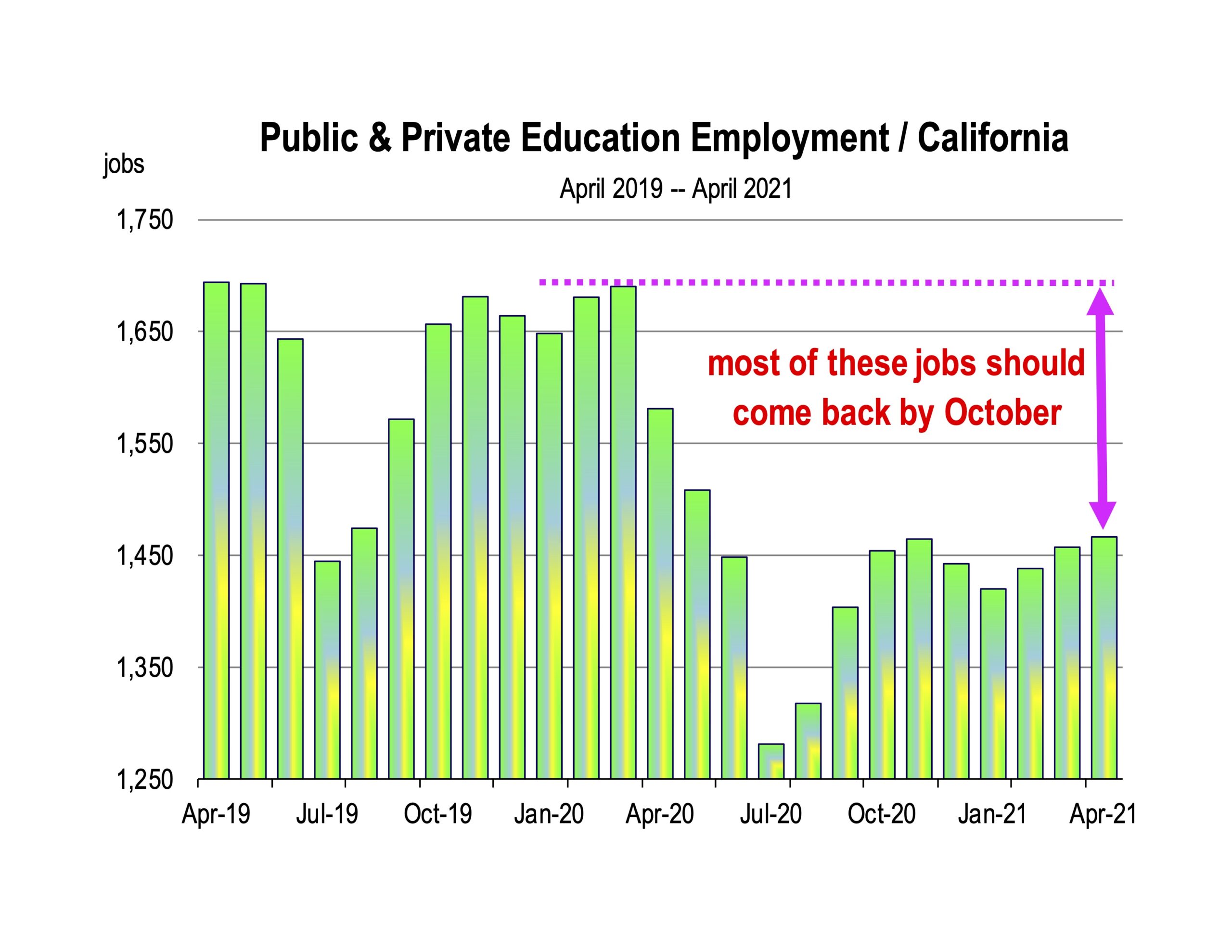 A return to normal

The return to what we knew as normal will probably come faster than we predicted if people return to the labor force. We were told that virtual workers would spell the doom of office space and that retail malls would become ghost towns. This is not the case. More new housing all over the state will mandate more neighborhood retail, and existing retail centers are diversifying their tenant mix to include services and entertainment. Most retail space surprisingly remains relatively full today.

Hybrid office worker scenarios will likely characterize many firm workforce configurations as workers generally return to the office. It appears that greater office flexibility to accommodate the needs for privacy, collaboration, mentoring, and training of returning workers may actually increase the demand for space rather than shrink it.

The return of the availability of services that was denied us during the pandemic will result in a strong increase in the demand for them for the remainder of this year. Travel will be the most sought-after commodity over the next year or two. Book your reservations today.