Inflation: Is it Really Only Transitory. . .?

It’s mid-year 2021 and one of the more relevant economic issues we currently face is the spate of clear and obvious price increases for many goods and services. 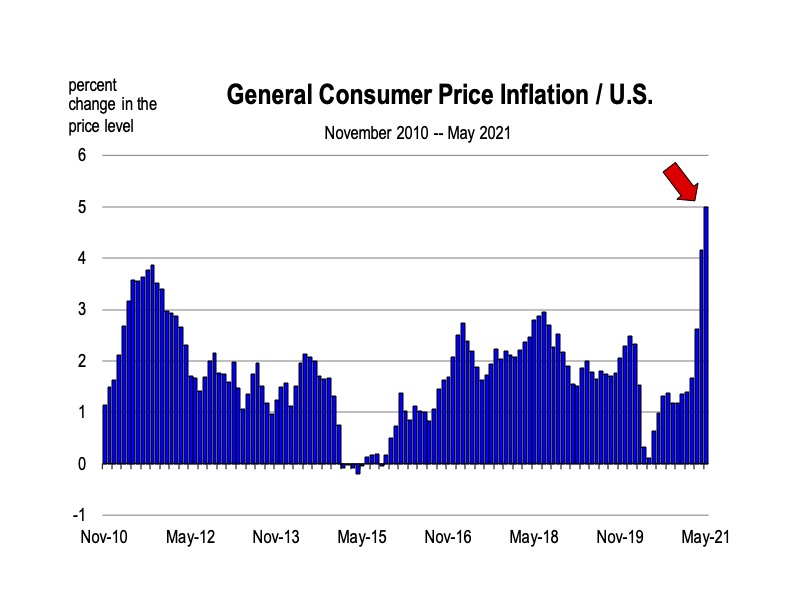 Travel related price increases are very likely catchup from the steeply discounted prices offered a year ago when no one was traveling anywhere.

But prices for commodities like lumber and concrete are sharply higher. Lumber prices remain far above pre-pandemic levels even after a sharp decline in recent weeks. Gold and silver prices have rallied as have cryptocurrency values year-over-year. Furthermore, food prices like seafood and beef, and energy prices are all up sharply. Wages have notably risen in the last 6 months.

There are a host of contributing factors:

Many economists are not concerned, indicating that the current spate of price increases is transitory, and the result of supply chain interruptions which have restricted supplies of goods.

The Fed is supposed to keep inflation contained. A few months of what seems like excessive price increases, especially when they are being blamed on the pandemic, is not a large cause for concern. Unless of course, the rise in prices does not abate, especially when production largely returns to pre-pandemic levels and the current supply bottlenecks are worked out.

If the current inflation persists, the Fed will have to quickly “do something” and right now that something means increasing short term interest rates.

Citing excess capacity in the economy, the Fed is not concerned that the $5.3 trillion in federal stimulus spending during the pandemic will create a longer term problem, and though their inflation forecasts tick up this year, they retreat next year and in 2023.

Is this wishful thinking? I think it might be.

We will know more as the year progresses and if the pent-up demand pressures abate, and/or inventory levels are restored in an orderly fashion.

There has been so much stimulus and while there is so much unemployment, much of it appears to be voluntary, due to the federal stimulus monies being paid to “unemployed” workers.

Will stimulus monies result in the hasty production of goods and services that tries to catch up to surging demand? Under that scenario, firms must hire more workers and employ more resources quickly, and that has the potential to manifest into demand push cost increases for inputs and for workers.

Workers are badly needed in the economy. There are more job openings today than at any other time in a recorded history that spans the last 20 years.2

Wages are rising sharply for many occupations in which workers appear to be “scarce.” Wages are also rising for professional and technical workers. Wages will continue to rise until job openings begin to be filled and are no longer rising every month.

The end of the unemployment bonus will help return more of the unemployed to work. Vaccinations and opening up schools full time, 5 days a week will enable anyone who had to stay at home to care for their children, themselves, or their parents or other elderly, to go back to work with more confidence.

That said, the question about longer term inflation is whether stimulus dollars will boost demand persistently over the next year or two or beyond, pushing production up faster, inducing higher costs. It’s a valid concern.

The Fed or the International Monetary Fund are less concerned. They don’t believe the government spending multiplier is that large. They also believe it will be diluted by stimulus money that won’t be spent because of contingencies and because of saving.

Nationally, the median home price increased 19 percent year over year in April. In California, the median selling price rose 39 percent in May versus May of 2020.

Now according to the May consumer price index, the rise in housing costs accounted for 26 percent of the overall increase in inflation. But the index also indicates that home costs are up only 2.2 percent over a year ago, and not 19 percent or anything close to that. This is because the sale of housing units is not included in the CPI. A home purchase is considered an investment and not consumption.

The cost of shelter for rental-occupied housing is rent. Rental data is only collected every 6 months so there is a lag if rents are rising quickly. For owners who occupy their home, the cost of their shelter is the implicit rent that they would have to pay if they were renting.

In an environment like now where home prices are rising rapidly, economists interpret this an increase in the price of a capital good. But to a buyer, it represents a higher cost of living.  So there is clearly a mismatch and the true cost of living when you include housing is understated. 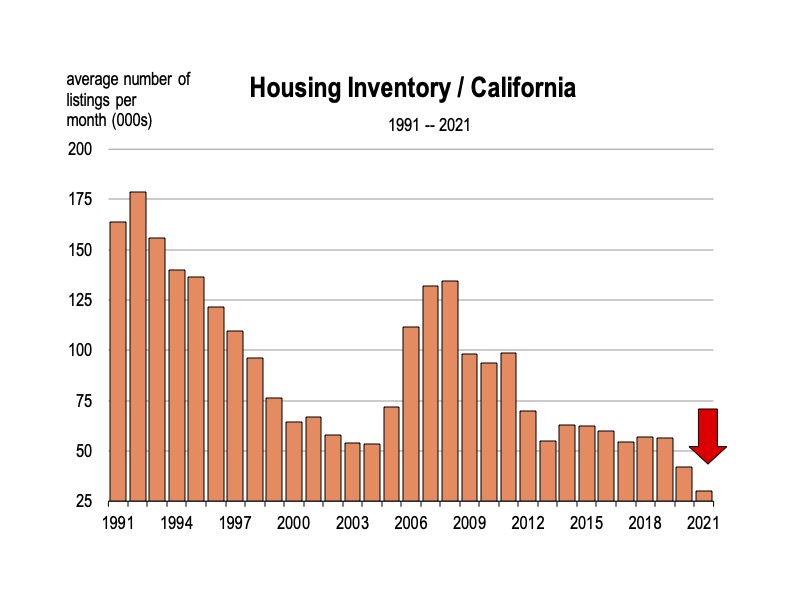 Only 1.16 million homes were on the market in April, a 20 percent drop from a year ago, according to the National Association of Realtors. In California, over the last 6 months, inventory levels have declined to their lowest on record.

The continued “shortage” of homes, especially at the lower end of the market, would imply that home prices will not cool off any time soon.3 However, nationally, sales are beginning to weaken and it’s likely that prices will ultimately follow. But this usual trend may not be dependable in such a supply constrained market.

Are supplies forecast to rise? Yes, with the demise of the pandemic and the return to a pre-pandemic economy, we expect mobility to gradually increase and homeowners to increasingly be willing to sell.

Realtor.com is already reporting a meaningful increase in inventory in some markets, and especially for new homes. So some relief in home price inflation may be forthcoming, even in California.

1 Nationally, Home prices were 13.2% higher in March, compared with March 2020, according to the S&P CoreLogic Case-Shiller National Home Price Index. The March gain is the largest since December 2005 and is one of the largest in the index’s 30-year history.

2 Which raises further questions: Why are they not available or being hired? Is there really a mismatch in job skills? How come this mismatch developed over the last 15 months? Conditions in the type of jobs that are needed have not changed that much. Much of the economy is going right back to where it was pre-pandemic. We originally thought there would be significant changes but we now know there are not.

3 There really are no “shortages” in competitive markets. Price equilibrates supply with demand and markets clear. We tend to think there is a shortage when we can’t buy the same commodity for the usual price (or something close to the usual price) and therefore refuse to buy it. The price of that commodity may or may not return to our notion of what it should be priced at, depending on the forces of supply and demand.