Problems are growing, but no Recession

Worries about a U.S. recession continue to mount, but it is not visible in much of the economic data, except for GDP. 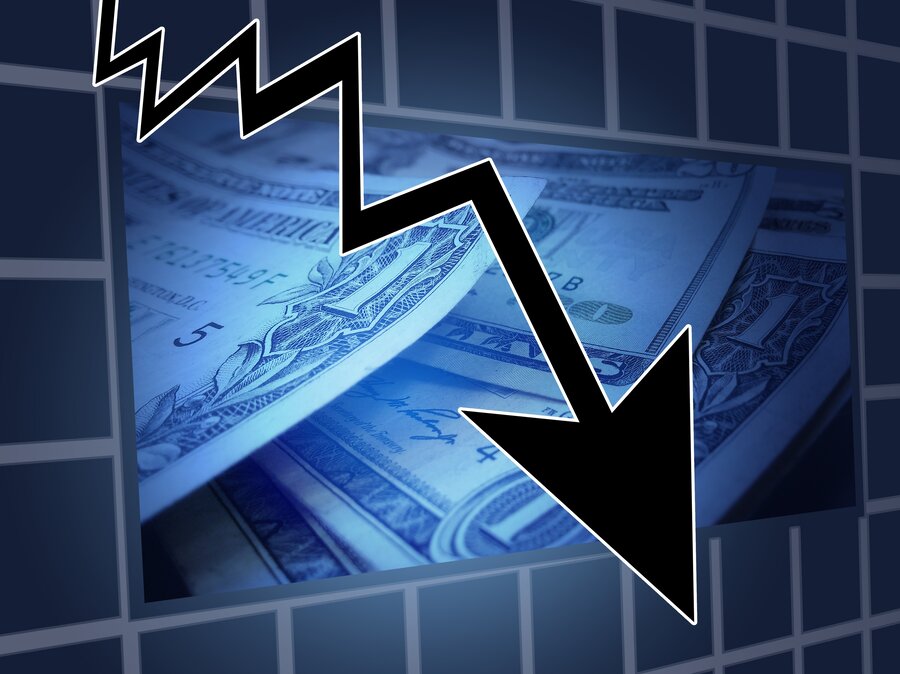 Everything you read online or hear on TV more than suggests that a recession is inevitable if not already here.

New data on inflation-adjusted consumer spending during May finally showed a decline (of 0.4 percent) and estimates of 2nd quarter growth of GDP are now running negative. Because GDP fell 1.6% at an annualized rate in the first quarter, two consecutive quarters of negative GDP growth usually has everyone claiming recession. But that is not yet the case.

Much of the economic data are not consistent with an economy that is in the midst of a recession. Overall spending by consumers moved lower recently principally because Americans are having trouble buying automobiles.  Not because of demand but because of supply.

The weakness in the economy seems to be limited to GDP and it is difficult to declare that the economy is in a recession when: 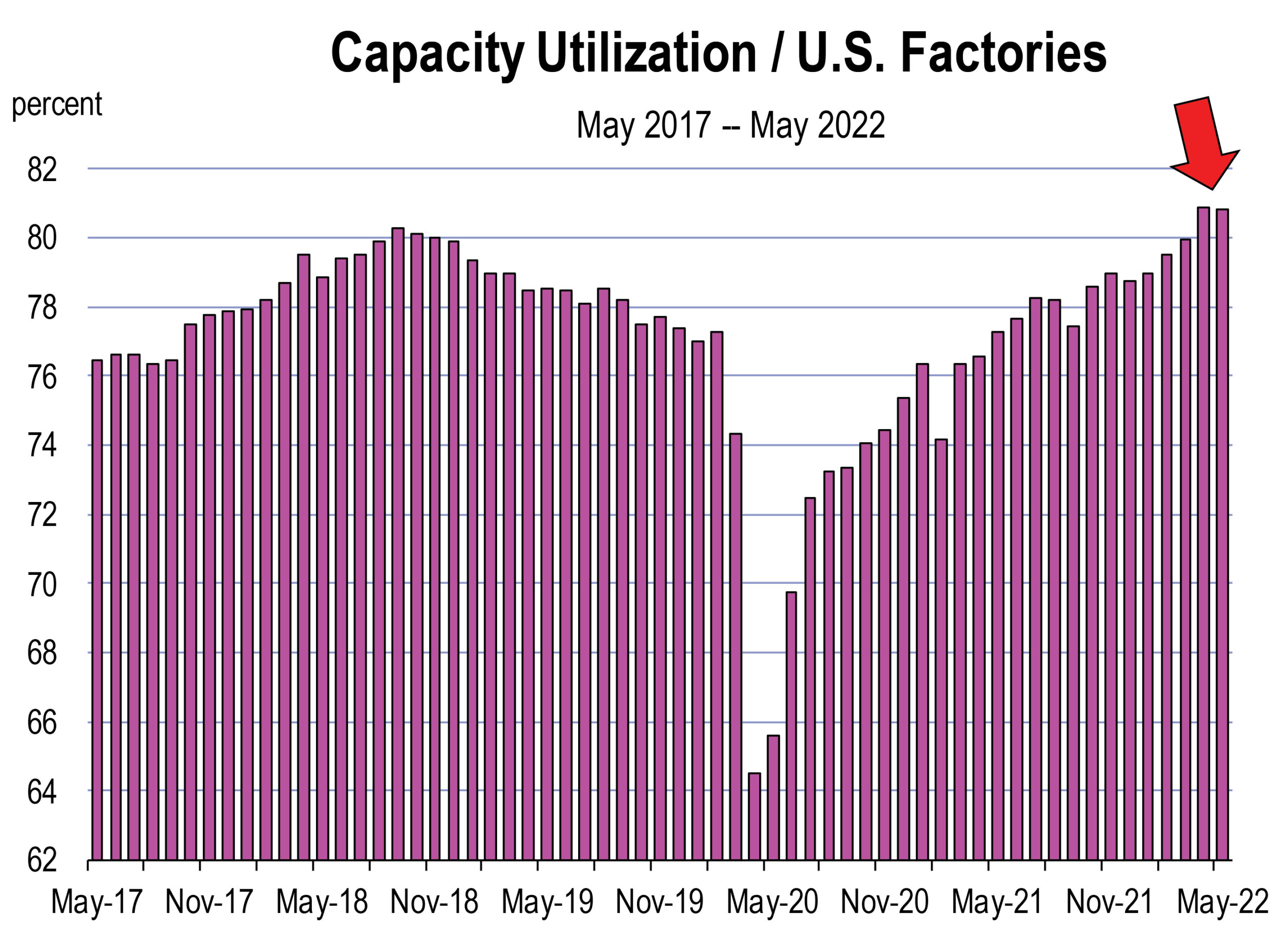 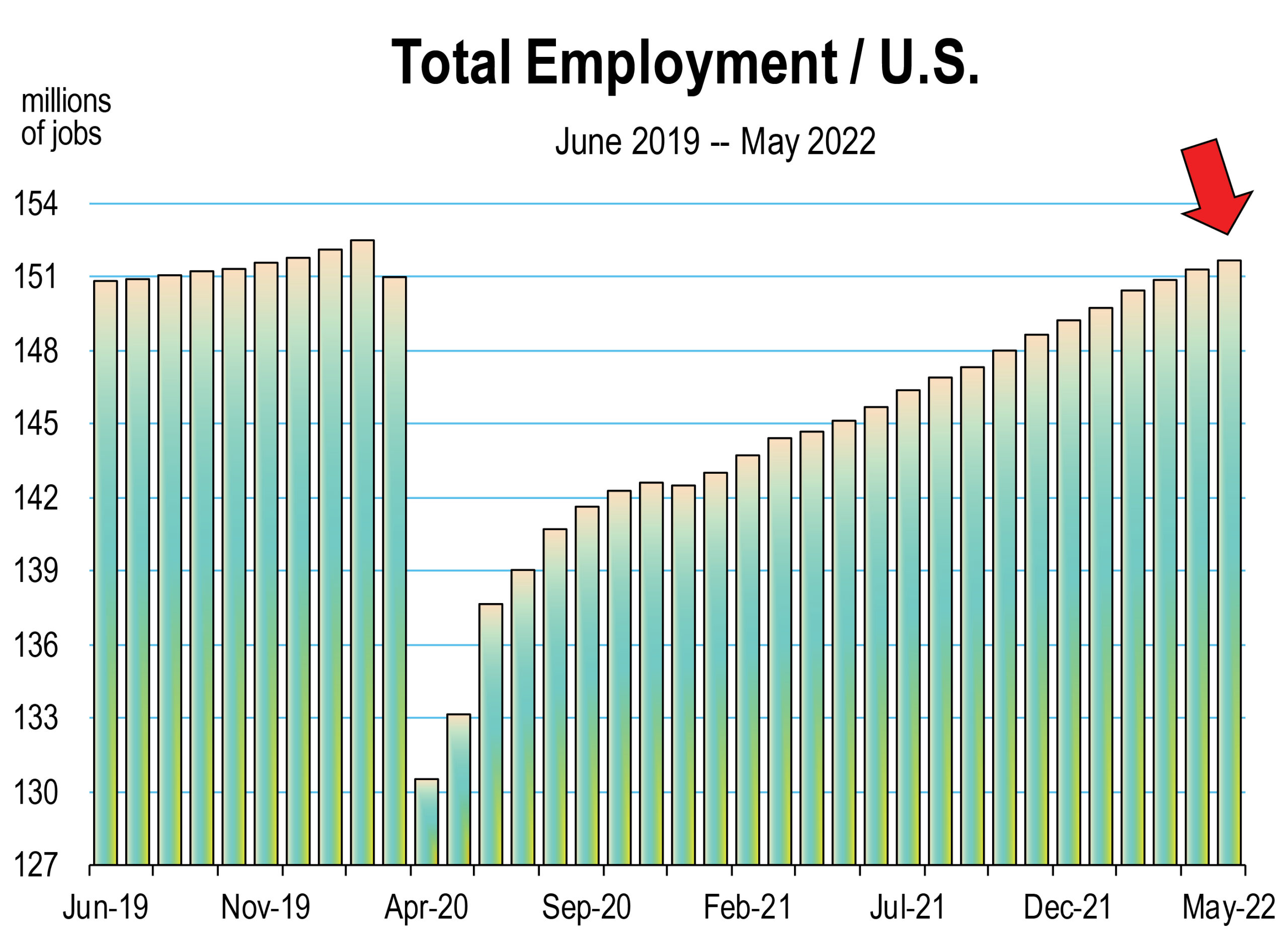 Slumping GDP growth is a technicality that economists, policymakers, and the media haggle about. What people may say is a recession is a slowdown or a change in the way their notions about the economy are working

The official arbiters of recession have not called a recession and it’s very likely they won’t until there is clear widespread malaise in economic activity, more pervasive than rising prices, rising interest rates, some product shortages, and growing dissatisfaction with policies of the current administration.

Inflation is THE Problem

Over the course of the last 6 months, we have been very clear to acknowledge that people are frustrated (if not infuriated) with gasoline prices that have doubled, and grocery bills that have risen 10 to 50 percent, which leads to the notion that the nation is in a recession.

Having inflation at 8.5 percent on a year-ago basis, compared with the 2.1 percent average growth in 2018 and 2019, is costing the average household $347 per month to purchase the same basket of goods and services as they did last year. However, the pure cost for households for having inflation running 8.5% is $460 per month.

At the same time that costs are rising, household wealth is retreating.  All three major U.S. stock market averages continue to sink to their lowest levels of the year, off 16 percent, 21 percent, and 29 percent respectively for the Dow, S&P, and Nasdaq Composite. 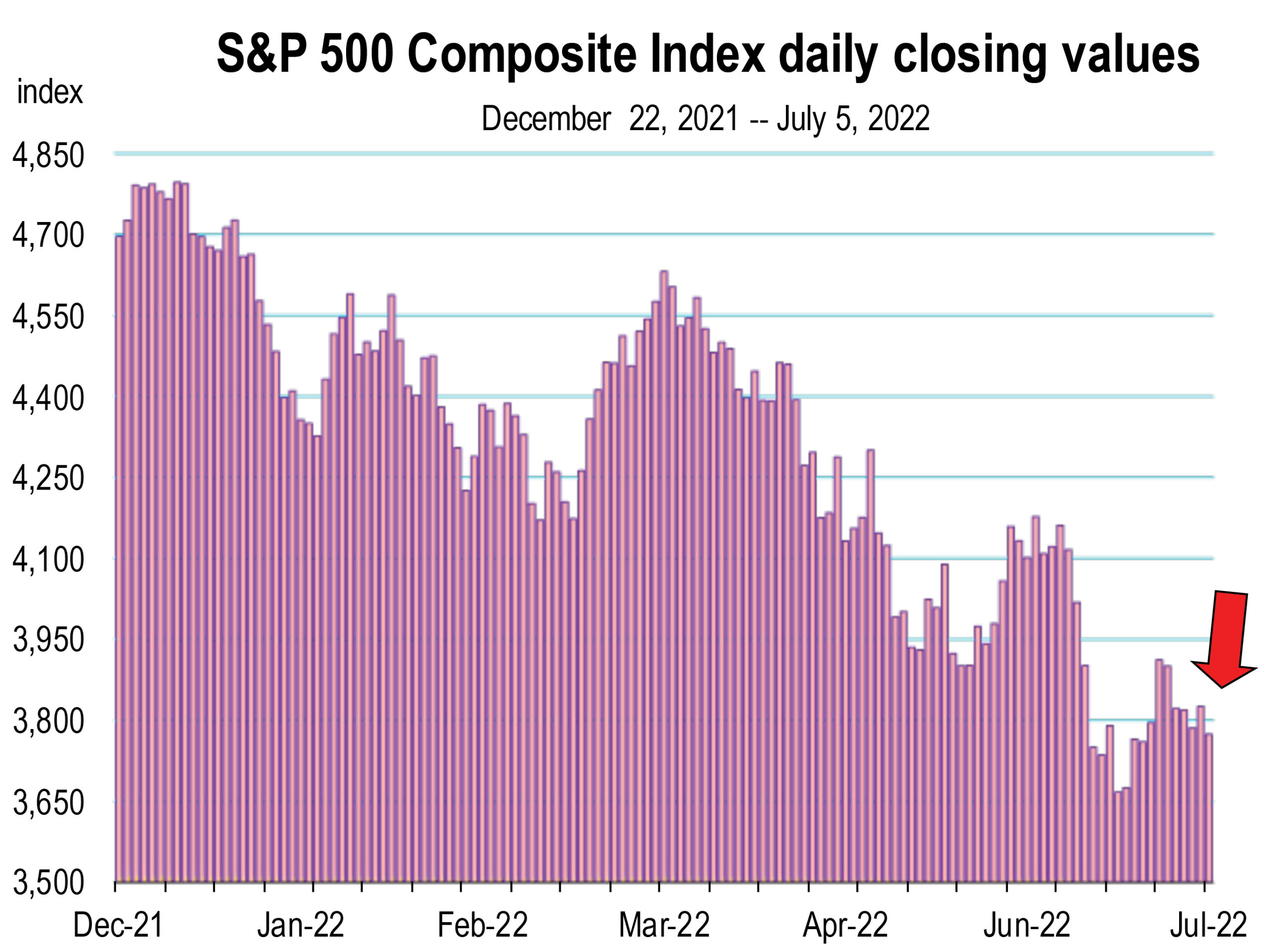 The collapse in the markets during June indicates that investors are pricing in another 50 point interest rate increase this year, if not two more, which will likely be in September and November following the 50 point hike presumed at the upcoming meeting on July 26.

The latest hike on June 14 pushed the key benchmark federal funds rate to a range between 1.50% to 1.75%, the highest since the pandemic began two years ago. 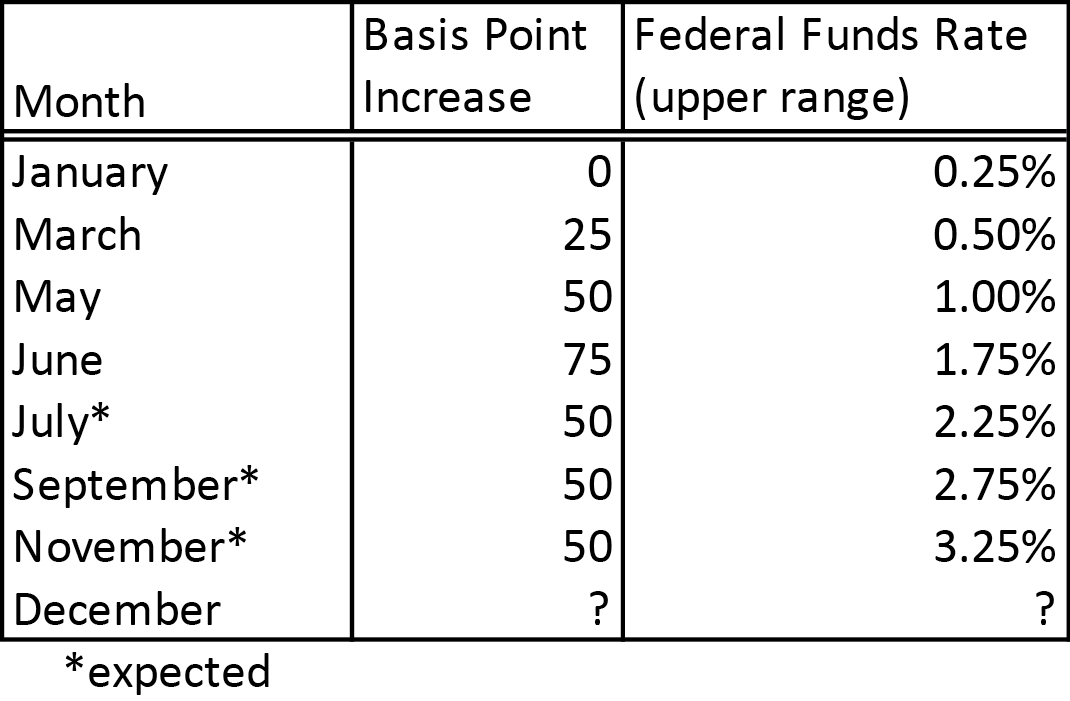 We’ll have to wait and see about December, but the June meeting of the Fed has policymakers expecting the Fed Funds Rate to rise to 3.4 or 3.5 percent by the end of 2022, the highest rate since 2008.

When investors, businesses, and consumers pull back on spending, a decline in aggregate demand or the total spending on goods and services (and equipment) occurs in the economy.  That pullback represents a contraction of the economy which motivates businesses to reduce their costs by laying off workers and disinvesting in inventory.

This leads directly to rising unemployment and a decline in production of goods. Then factories will be running at way less than full capacity.

If this condition is (1) significant, and (2) occurring for a meaningful duration of time, then that’s a recession.  A recession is always accompanied by rising unemployment.  The extent of that unemployment leads to further pullbacks in consumption, often foreclosures of homes, asset devaluation in general, and rising debt. We don’t have any of those conditions today and we are not even close.

Housing prices continue to rise though appreciation appears to be moderating in some regions. Rising interest rates are now starting to affect existing home sales, but not new home production.

The office market appears stable in most metro areas, and there is insatiable demand for industrial buildings and new development. Even the retail markets appear mostly fully utilized.

Conditions are nevertheless vulnerable due to that last 100 days of impetuous Fed actions.

The Fed has gone from doing nothing for the first 70 days of this year to a zero tolerance policy for any more upside surprises in inflation. They fell behind and are now playing the dangerous game of catch up.

This is risky because an aggressive front-loading rate hikes makes it difficult to calibrate monetary policy in the future; the central bank won’t know that it was too aggressive until it is too late.  Usually rate hikes occur intermittently so the Fed can assess the impact on the economy. 50 to 75 basis point hikes in rapid succession make this kind of assessment virtually impossible.

Financial market conditions are the primary channel through which money flows to economic activity. Financial markets have priced in the aggressive front-loaded interest rate increases that ultimately return the federal funds rate to a more neutral rate by the end of this year.

Pandemic induced supply chain issues were a principal cause of the initial uptick in inflation last year. Add to that rising crude oil prices as U.S. energy policy was changed to limit domestic oil production.

Then, add to that the current administration’s $1.9 trillion American Rescue Plan spending package in March of 2021 which overheated an economy that was already running hot, and inflation started to surge. The Fed, with easy monetary policy including quantitative easing, continued to accommodate this spending and the subsequent $1.2 trillion infrastructure plan passed by Congress 7 months later.

These policy missteps are the principal cause of today’s inflation, higher interest rates, and the death spiral in the stock market.

Then Russia invaded Ukraine and made the pre-existing condition worse.

The missteps are the principal reason why you should feel upset, let down, disappointed, and even furious with current conditions that are the result of misguided or mishandled economic policies.