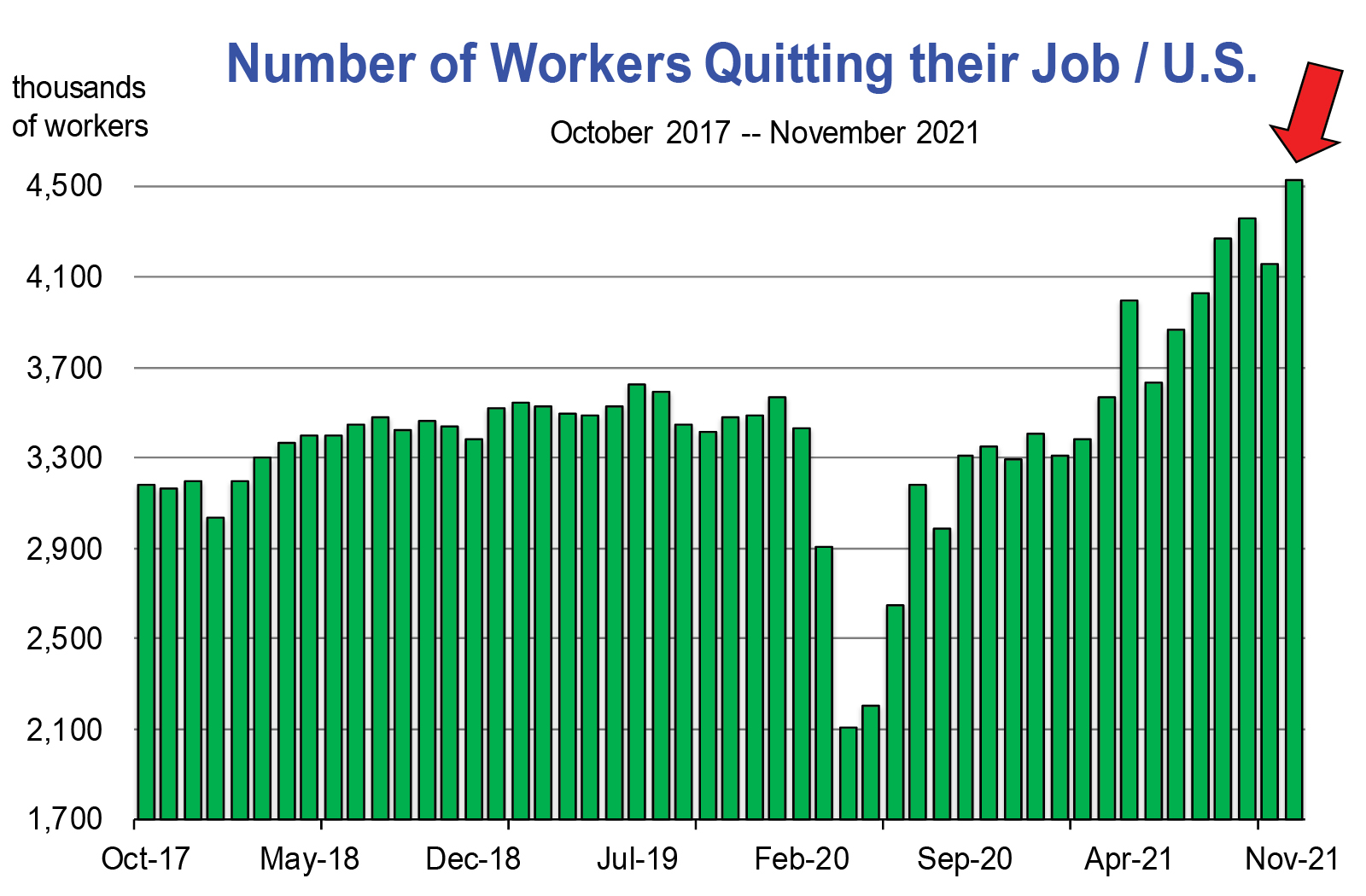 Into January 2022 we go and the pandemic continues; its future progression (or how long governments will continue to maintain a state of emergency in the name of public health) is uncertain. We generally believe the pandemic will be brought under control and that the disruptions and frictions it has caused in the labor market and to the supply chain will be resolved over time.

While inventory imbalances are now dissipating, they remain troublesome. Financial imbalances are manifesting in unwanted inflation which will precipitate more fiscal tightening in 2022.

The pandemic’s disruption on the labor market was originally catastrophic but conditions have dramatically improved, and for some regions of California the labor market is back to its pre-pandemic status. But not yet in the principal metro areas. In general however, it’s not that people can’t find a job, it’s that they don’t want to work.

The return of many workers who had left the labor market during the pandemic because of childcare or eldercare responsibilities will take place over a longer period of time than was predicted earlier in 2021. We had expected that the reopening of schools in August and September last year would bring a large influx of parents who had been unable to work back into the labor force. Other workers are staying out because of illness, concern over the virus, or excess saving built up in 2020-2021 due to stimulus checks and/or the federal unemployment bonus. Furthermore, about 2 million more workers than expected ended up retiring.

Though we believe the labor force will ultimately come back, for now fewer people willing to work is looking like a new normal. Also, just-in-time production, transportation and inventory schedules will be restored world-wide. But not yet. Until these conditions of the “old” normal return, we are navigating a new normal in 2022:

To date, the pandemic has accelerated some trends that were already developing:

The two principal conditions—remote shopping and remote working—are going to be with us for the long haul. The extent of remote shopping is likely to only accelerate. The extent to which remote working characterizes the workplace may well diminish over time. But we are speculating on this because right now, this is the normal rather than a new normal.

Some supervisors are uncomfortable with the out-of-sight reality of people working from home. Will companies let go of control or will they mandate at least a hybrid schedule? This may depend on how quickly the labor force returns and expands from the record numbers of new college graduates. Surveys indicate that entry level workers want to be in the office and not at home. 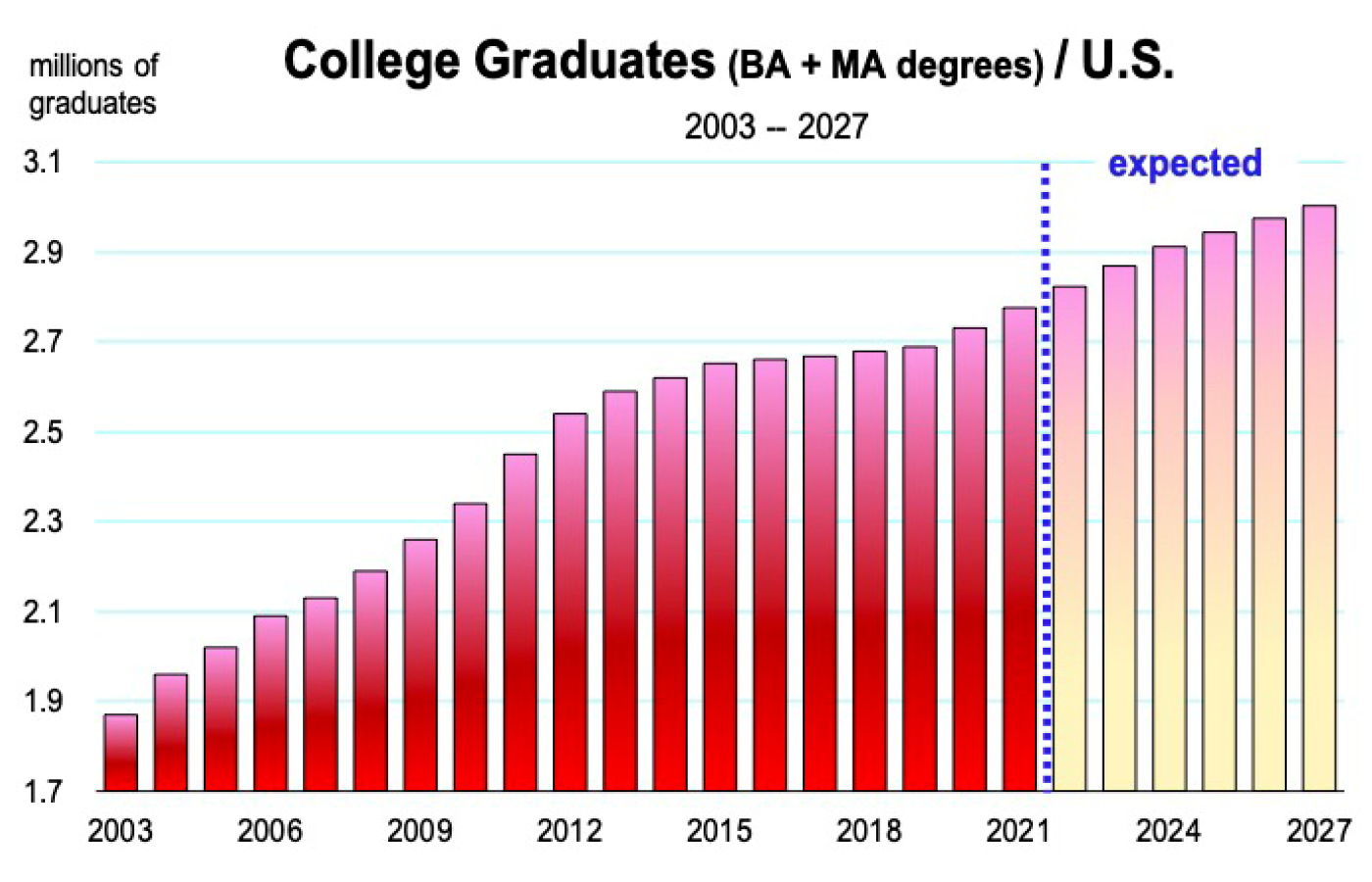 Are all the new variants and all of our emphasis on positive cases the new normal?

It appears so, and with this concern is the attendant impact on the economy. More than 2 million workers say concerns about getting or spreading COVID-19 are their main reason for not working.

The Omicron wave has intensified, and it (as did Delta) appears to be keeping many of these people out of the labor force. Daily positive cases have now reached an all-time record high. And it also appears to be interrupting economic growth in general:

Omicron will delay returning workers to the labor force and it could delay product deliveries and services. And to date, we have not seen any reason to believe that upcoming variants will elicit a different response by the media or public health officials, which in turn, panics consumers. Oh no, and now here comes the IHU variant . . . . 2

Therefore, the normal for 2022 could be a continuation of economic interruptions that hamper growth and keep it from reaching its maximum potential, given the capital and labor resources we would otherwise have available for productive utilization.

That said, we can expect variants to continue emerging, raise infection levels in the population, and then recede. We are in the fourth wave of the coronavirus. Omicron appears to be the most transmissible but the least serious. We can only hope that the seriousness of future variants continues to fade and the elusive herd immunity that we’ve been promised is forthcoming sometime this year. But for now, the variants are a daily topic of conversation that will continue to be indefinitely.

1 “Why Working from Home Will Stick,” by Jose Barrero, Bloom, Nicholas and Davis, Steven, Working Paper January 21, 2021. 50 percent of the U.S. workforce has the ability to work from home. The authors expects 40 percent of these workers to go hybrid and 10 percent to remain fully remote.