Are We Getting Back to Normal Yet?

I have felt compelled to keep you up-to-date monthly on the state of the economy because the progress of recovery from the pandemic recession has recently been both fragile and slow. Rising nervousness about the stock market and inflation are contributing to this fragility. In larger part however, there is deepening concern over the pandemic’s response by state and federal governments that has interfered with the return of the economy.

Consumers have jettisoned much of their optimism about future prospects for the economy. The sentiment index continues to flounder below the pandemic low. Is Omicron creating the reticence in people, or is it the response to how Omicron is being handled by state and local governments? I think the latter is more likely. 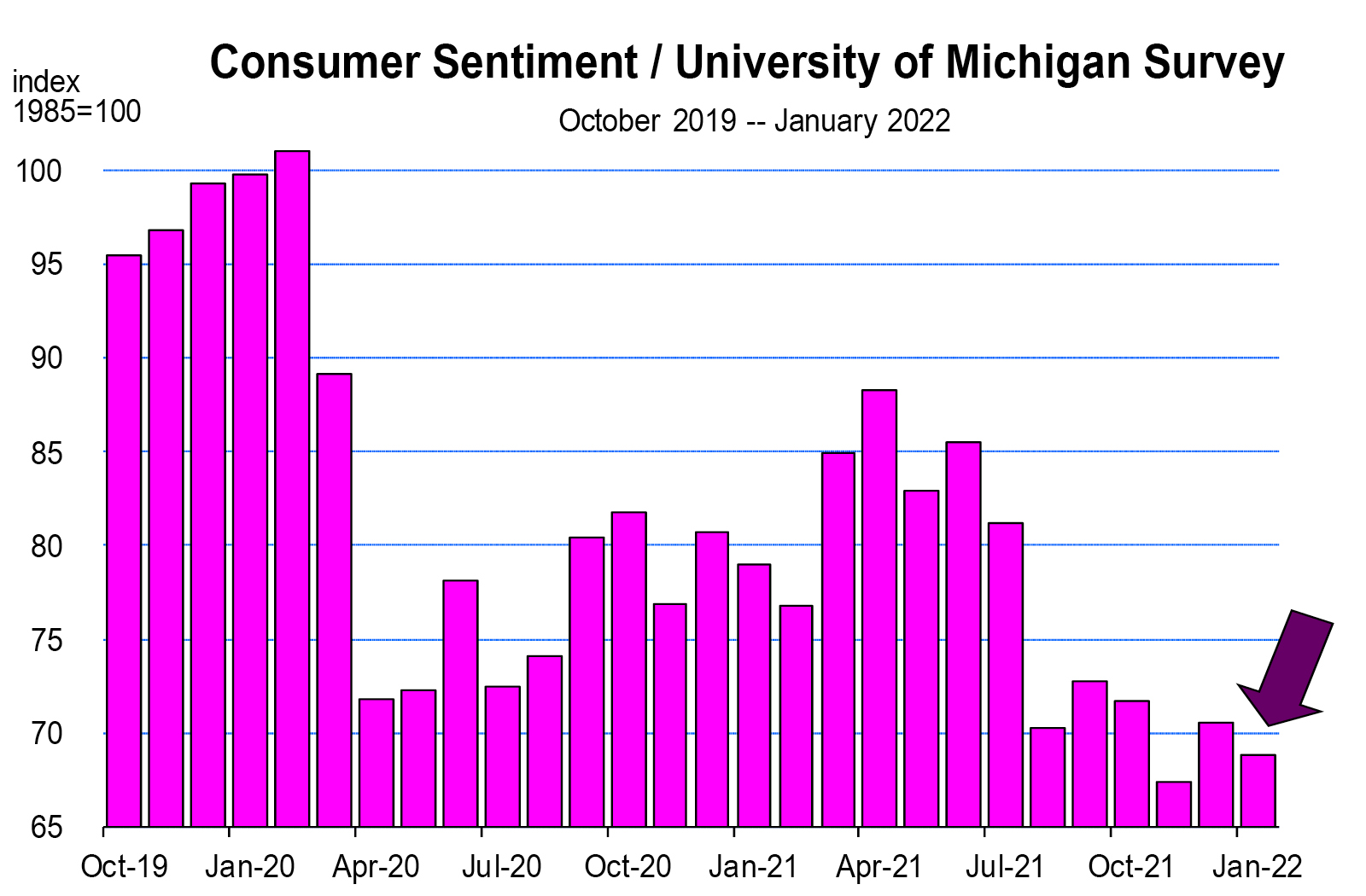 In response to the title of this newsletter: no; we are not back to normal. And I really don’t need to spell this out. Moody’s Analytics partnered with CNN to create the Back-to-Normal Index which uses 44 indicators to ascertain whether state economies have returned to pre-pandemic levels. The Back-to-Normal Index for California as of January 26 is 87 percent. Only Illinois, New York, Pennsylvania, Oregon, Massachusetts and Vermont are lower among all 50 states. Many state economies have slipped recently, including California which has the highest unemployment rate in the nation.

Why aren’t we normal yet? It could be that we still have the following experiments underway that are not normal:

More fiscal policy is simply not needed for an economy that initially rebounded back sharply on its own by removing restrictions. Now it has become the root cause of current inflation and more Americans see this clearly.

While the Fed has indeed tapered, they are still massively expanding monetary policy with $60 billion of bond purchases this month and next. And though rate hikes are going to occur this year, why have they not occurred yet when we need to have inflation shut down as soon as possible?

It’s likely because of the stock market correction throughout the month of January, and the fear that a bear market may prevail if the juice for the markets is withdrawn too fast. The economy may also be wobbling some. Recent news on U.S. manufacturing shows a softening, particularly in the delivery of finished goods. The near term outlook for manufacturing is compromised by the supply chain issues which are not resolving fast enough. GDP growth was sharply higher in the 4th quarter, but much of this was due to inventories which will have a depressing impact on the first quarter 2022 GDP report.

Labor availability issues remain with little relief through December. In California, many employment sectors have fully recovered or are close to complete recovery. But the labor force has not. California is still 400,000 potential workers short of the labor force peak that prevailed just before the pandemic hit. This is one of the most abnormal issues in California that remains seriously problematic to the restoration of the workforce and delivery of normal services to consumers, especially leisure and food services. The vaccine mandates may certainly be contributing to the drag on the labor force recovery. 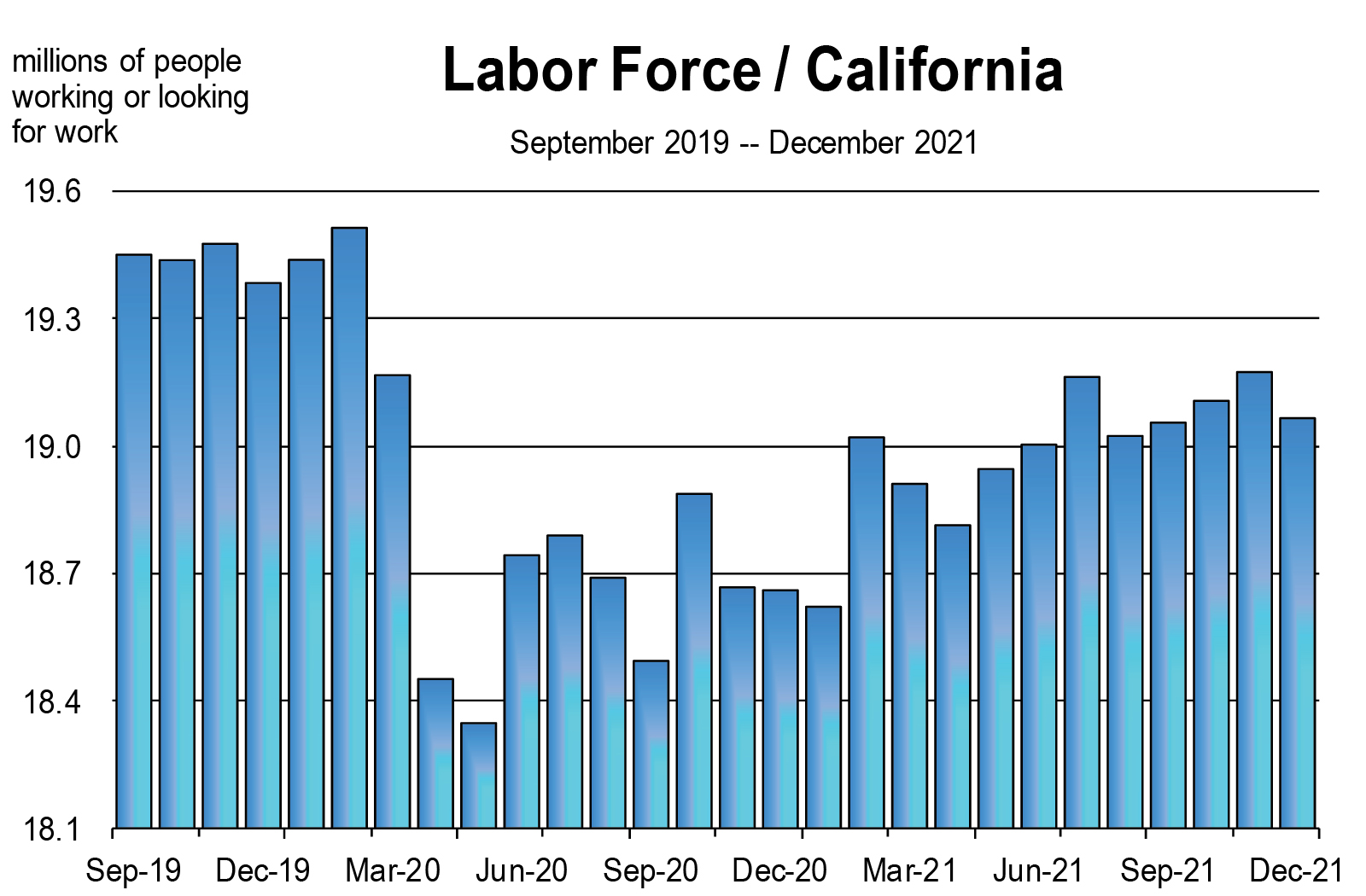 Supply issues persist and the manifestation of this is empty store shelves, which are pervasive today.2 Green onion rationing at Trader Joes? They told me to grow my own.

The backlog of containers with furniture, clothing, electronics and other imports that were piling up at the Los Angeles and Long Beach ports last summer and fall has been dwindling.

The so-called dwell time a container sits around on average before it gets picked up has fallen by more than half since late October and there are no longer dozens of ships at anchor outside the ports waiting for weeks before they can berth and offload their cargo.

But stacks of empty containers are preventing truck drivers from leaving their own empties and swapping them for fulls to deliver to desperately needed destinations. Furthermore, more ships heading this way from Asia are on the horizon. Unless a plan is devised for empty containers hording Port space, ongoing congestion problems will persist.

What We Need Right Now

I typically hesitate to make recommendations on what needs to occur to put the state on a faster track to normalization. But clearly, the experiments underway are obstructing this path, making more people fearful and/or pessimistic, and infuriating others. We can see it in the data. Therefore, putting my hesitation aside, here’s what needs to happen, IMHO:

Reverse the experiments—all of them. They are not normal anyway and largely unnecessary.

Don’t think of passing another spending or stimulus bill in Congress. In fact, rescind the $1.2 trillion Infrastructure Bill.

We should be accelerating the tapering of the quantitative easing or bond buying program, or entirely withdrawing it. We should not be waiting until March to raise interest rates. Rates should be hiked now. We need some bold moves that we saw work wonders in the past. The last time the Fed actively put downward pressure on inflation, the policy worked. This was in 1979. Aggressive increases in the federal funds and discount rates started in August when Paul Volker became the new Fed chair. This continued through April of 1980. Inflation peaked that month, and tumbled thereafter.

The courts have spoken about vaccine mandates. We need to end these now along with the passports. We should also be following in the footsteps of the United Kingdom and declare the pandemic over. This might by itself get us further back to normal than anything else.

1 Senate Bill 871 would add the coronavirus vaccine to the list of required school vaccines (with no exemptions) on January 1, 2023. Federal, state, and local authorities are requiring certain categories of workers to be vaccinated. Vaccine proof is required in Los Angeles County. Legislation in Sacramento is being designed to require vaccines for all people in workplaces, schools, and public venues like malls, museums and restaurants.