The Reversals Have Slowed the Recovery

The strong recovery we observed in May and were optimistic about going into the summer has clearly weakened. The economy is now moving sideways, at best.

The western world has now suffered through 20 weeks of the pandemic. During the 20 weeks, May 16 to August 4, 4.9 million people have tested positive for coronavirus in the U.S. Reported deaths from the disease now stand at 160,000.

Most of the U.S. economy was locked down for half of March, all of April, and about half of May. Consequently, economic activity was dramatically impacted in the second quarter.

The growth of total output in the United States from the peak quarter (2019 Q4) to the second quarter of this year was negative 11 percent. On an annualized bases, the economy was down 33 percent in Q2. To put this into context, our annual average growth rate over the last 10 years has been +2.3 percent. 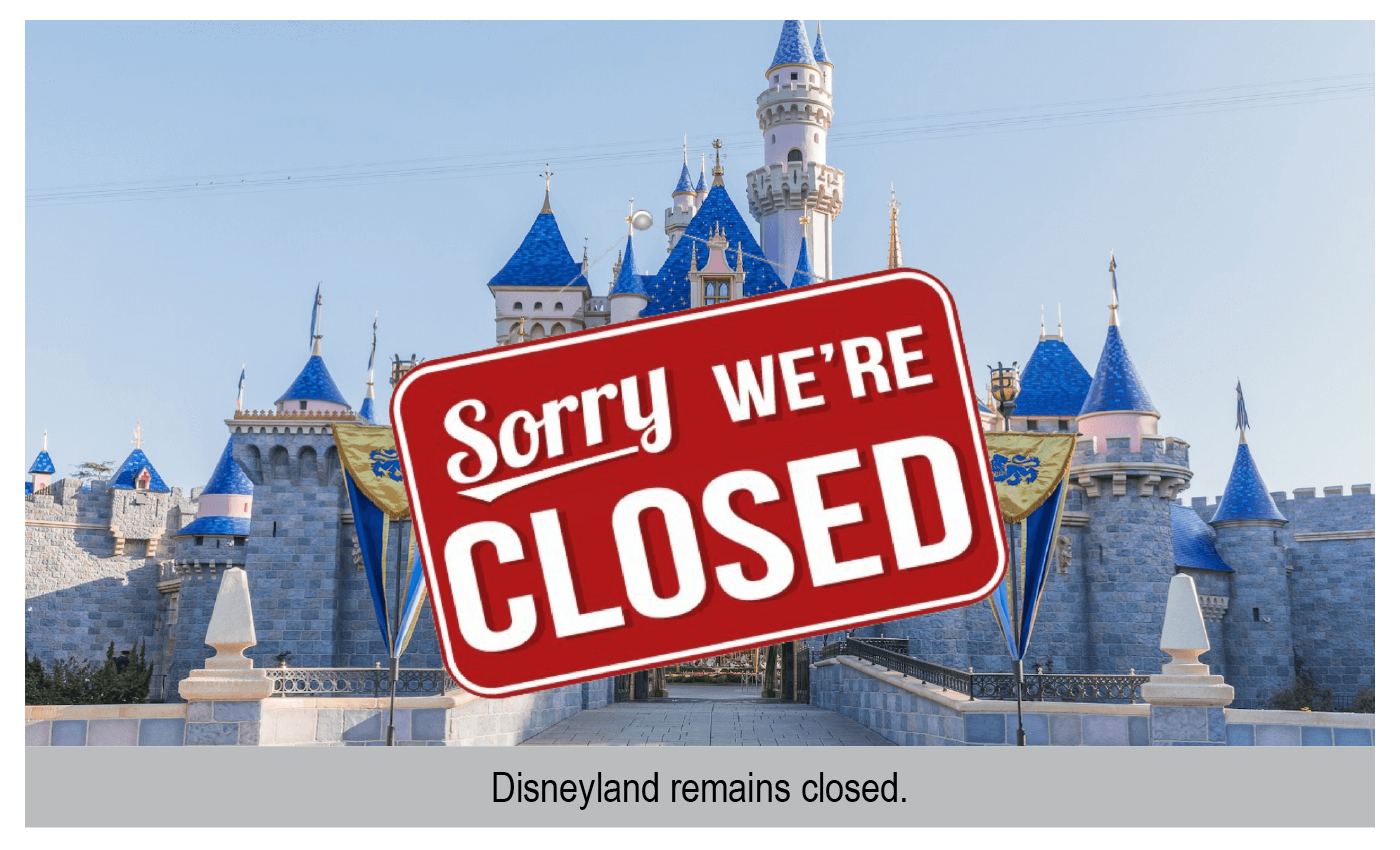 There has been very little travel, no large public gatherings, no audiences at sporting events, no in person concerts, conventions, or conferences since mid-March. There is now a pause in re-opening plans in most large states, or reversals of openings with re-closings of restaurants, bars, personal care stores, shops, gyms, and museums.

European countries are now open and travel within the EU is rising but occupancy at most hotels remains low because tourism is crippled by the travel ban on U.S. visitors. We represent 15 million travelers per year to Europe, mostly in the summer months. None are there now.

Consumer confidence dipped in July. And consumer sentiment is unlikely to make a comeback until the labor market improves, states reopen non-essential businesses, and the number of reported corona cases falls significantly, and for long enough, to extinguish fears of another wave of infections.

While the second quarter GDP report was ugly, it was no surprise. Despite the reversals, economic growth will rebound in the third quarter because so much more of the national economy is open and operating than in the April-May period.

However, the labor market will be slow to follow. Because of the ongoing restrictions, the unemployment rate will remain elevated and may not improve in the third quarter. It is already increasing again in California. Moreover, most businesses are no longer investing or hiring, meaning those permanently laid off will find it difficult to return to work immediately.

Continuing unemployment claims rose again at the end of July (the latest report), and surveys indicate that fewer people are currently working. This is all because of the reversals in the economy and the depletion of the Paycheck Protection Program loans that rescued many workers from layoffs between April and June.

Those loans were largely used up on worker payrolls. Also now completed is the federal program to supplement unemployment insurance benefits to laid off workers. The bonus payments ended on July 31st.

The first round of Federal stimulus is therefore wearing off. Federal Reserve chairman Jerome Powell said that additional direct fiscal stimulus is needed as the economy has begun to weaken because of the surge in COVID-19 cases and states either pausing or rolling back their re-openings. There is no replacement rescue program, yet.

There is now a divergence emerging between the U.S. and California, and this is because California is still the most locked down state.

Small businesses are suffering in most states, so the decline of establishments is not unique to California. It is estimated that states accounting for 70 percent of the nation’s GDP have paused or reversed their re-openings. Furthermore, more people are putting themselves in self-quarantine and this along with the massive number of layoffs is curtailing overall spending. 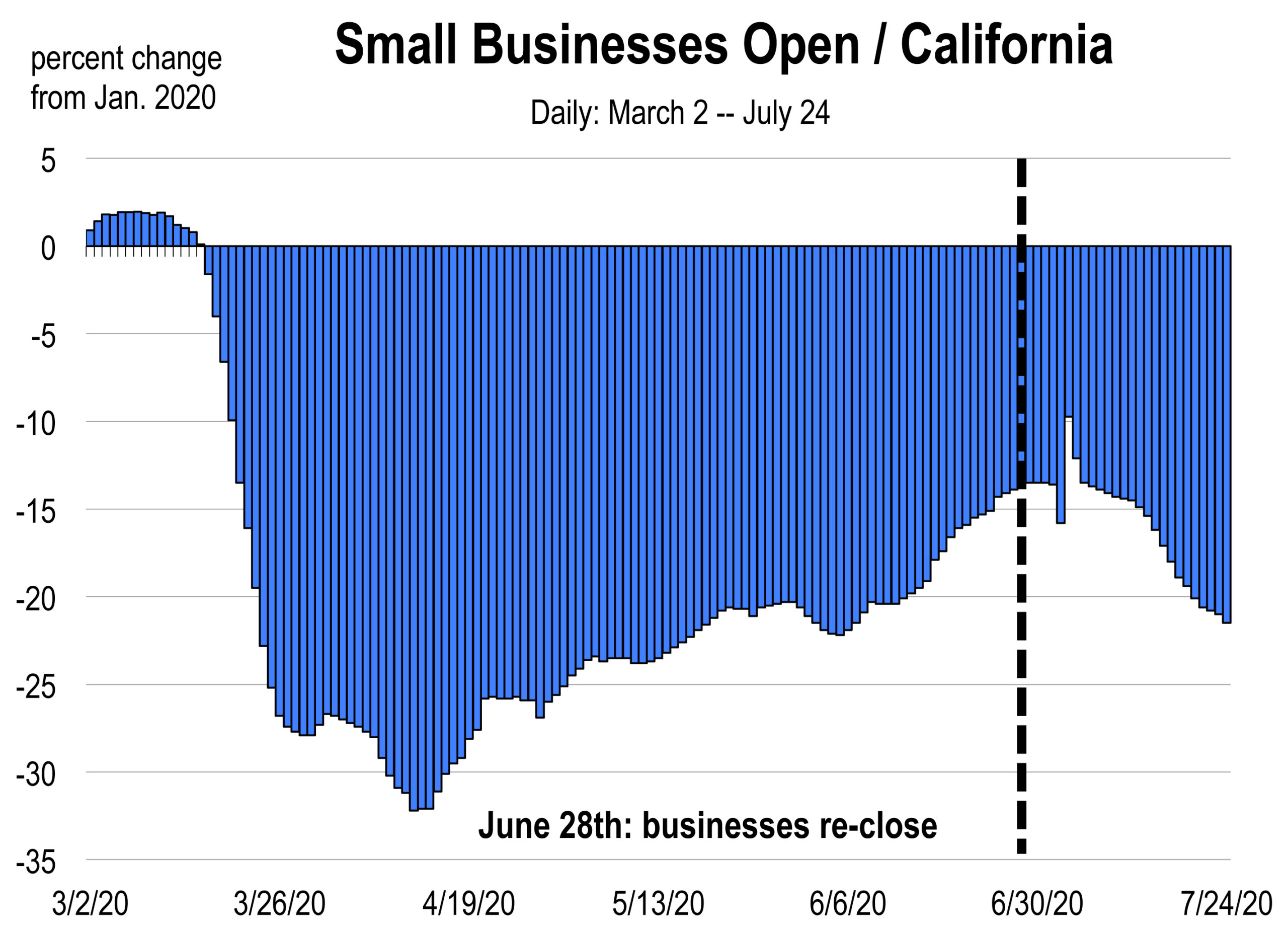 Because schools are not starting in-person education in the fall, the economy will be absent a significant boost in economic activity from student transportation services, food services, school and campus events and sports activities, social group spending, and dormitory services at universities.

How will schools raise money for special education services? Will there still be bake sales or Christmas wrapping paper drives? What about high school football? 27 states will start the fall season as scheduled. Seven have yet to decide. The rest including California, Nevada, Arizona, Oregon, and Washington will delay or cancel the season. California will move football to the winter season, starting in January.

College football will proceed, but the number of games will be reduced and often limited to intra-league play. Will games be played in empty stadiums? In many states this will be the case, eliminating all of the economic activity generated by spectator spending.

The haze over the outlook for the economy is clearing some. We can now see that what is needed to rebound out of this mess is restoring confidence so consumers will leave their proverbial bunkers and go out and spend. We need state and local governments to withdraw all the restrictions and allow small business (and all business) to expand production and sales and hire again. Neither of these actions will occur until the pandemic is under control, and the concern about infection has passed.

Ending that concern may be near impossible without a cure or some clear evidence that the virus is burning out.