Oh, somewhere in this favored land the sun is shining bright,
The band is playing somewhere, and somewhere hearts are light;
And somewhere men are laughing, and somewhere children shout,
But there is no joy in Mudville . . . . 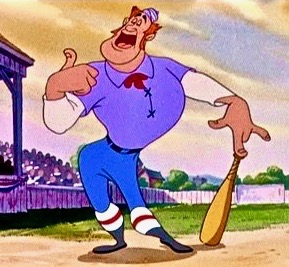 And as you know, the poem ends with Casey striking out, sending the crowd home unhappy.

The title of this newsletter was the title of a book by Stanford Economics Professor Tibor Scitovsky back in the 1970s. The premise of the book was that economic abundance does not necessarily lead to happy consumers.

The 70s was a decade of meager economic growth, high inflation, and a crummy stock market. There was no recession between 1975 and 1980 but it was nevertheless a joyless period for the economy.

Today, a similar scenario has arguably emerged.  Growth is stronger today than in the 70s, but there is a clear disconnect between economic growth and consumer sentiment—a relatively rare occurrence we have not experienced this century.

Economic growth was strong in 2021 and labor markets returned to their pre-pandemic status.  If the economy is not at full employment, it is a heartbeat away from it. The labor market has tightened so much that job opportunities are not only abundant but go unfilled for many months.

The national economy has transitioned from recovery to expansion as we fly through the various phases of the business cycle. 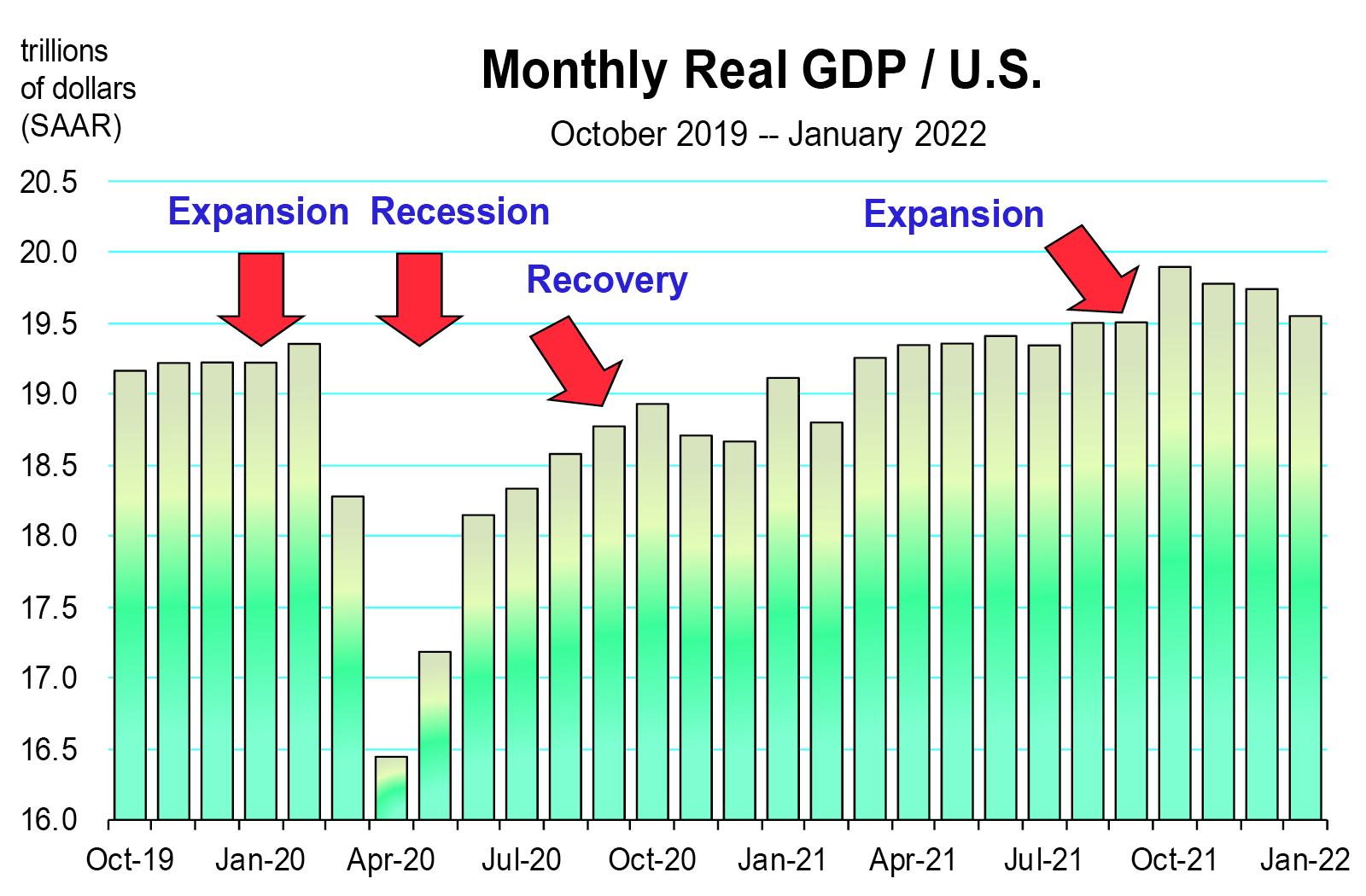 The markets for production and employment are healthy.  The consensus forecast this year, notwithstanding the Russian-Ukraine war, is for a continuation of above long-term average growth, largely due to the final abatement of the pandemic, and the strength of consumer income including pent-up spending.

However, we are also in a period of economic turmoil. The inflation we are experiencing, coupled with the current geopolitical conflict, pose substantial downside risks to the economic outlook this year.

Surveys of business leaders regarding present business conditions and expectations of the economy’s performance through midyear are notably weak, with well over half of respondents feeling that present conditions are getting worse and will be worse later this year. The global economic recovery remains fragile.

Certainly enough, economic growth has slowed way down in the first three months of the year to probably less than 1 percent.  The Fed is on the verge of an aggressive monetary policy to interrupt inflation, planning a series of rate increases for the rest of the year and ending the asset purchase program. The stock market has been understandably in flux. 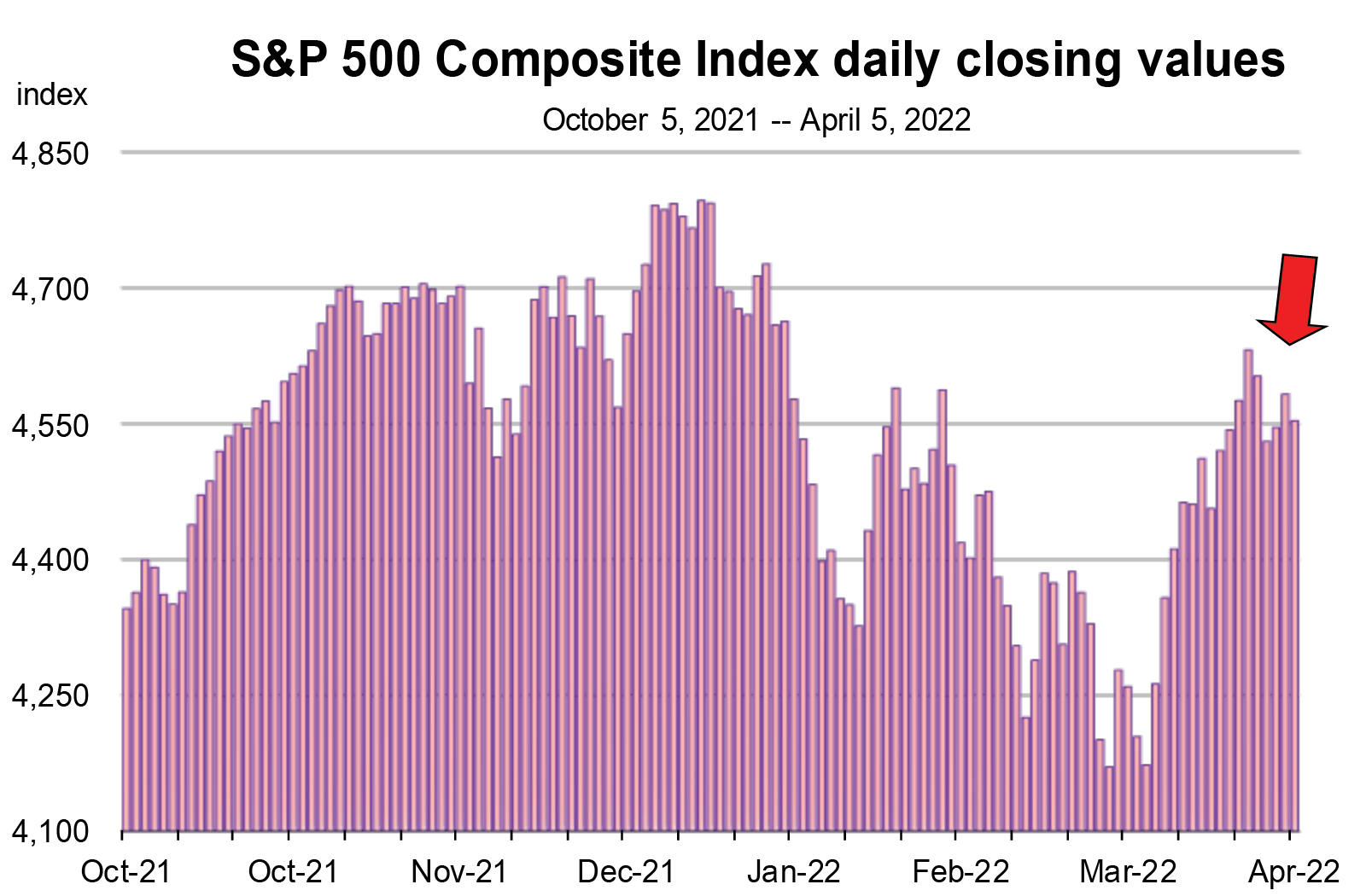 Russia’s invasion of Ukraine and the global response create an escalating uncertainty that is not good for the world economy.  Sudden higher oil, natural gas, agricultural and metal prices are conflating with already painfully high inflation caused by pandemic disruptions to supply chains and labor markets.

The U.S. economy should be largely insulated from the war unless a more aggressive policy direction is taken, or if Russia responds to U.S. imposed sanctions with cyberattacks on U.S. energy infrastructure.

Accelerating Inflation is now the largest risk, and the current level of inflation (already at a 40 year high) predated the Russian-Ukraine war.  This was the biggest concern of Americans in the March poll by Gallop.1 An end of the war will not cure inflation, nor is it likely to reverse the current stock market consolidation that is also of worry to consumers.

So right now, amidst all the problems which appear to be weighing heavy on our sentiment in grocery stores and at gas stations, and putting aside the 2 month pandemic recession, this is clearly not our happiest of moments. 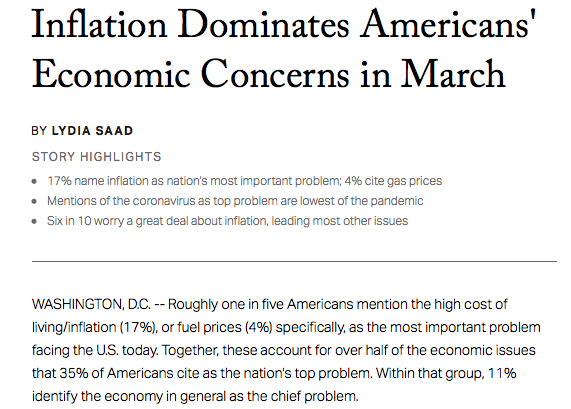 But other than crude oil, production of goods will come back. So think about all the production that will occur to replenish needed inventories that are in steady demand. And the labor force should also return with pandemic related reasons now dissipating. The unemployment rate could increase more than the Fed anticipates as strong nominal wage growth and fading effects of the pandemic pull more workers back into the labor force.

This is why the longer term outlook for extinguishing inflation is bullish.

I mentioned the risk of stagflation in the November 2021 newsletter. The likelihood of this scenario is not high, but it is rising.

Americans appear well aware of these risks which is the compounding issue underlying our joylessness:

(1) How the war unfolds in Europe, which is now a bigger issue than

An upside risk is that U.S. and global production could accelerate beyond expectations if war is resolved soon, and/or workers return to the labor force more rapidly to fill job openings, generate more income, increase spending, and therefore overall economic growth.

1 Most Important Problem, Gallup Poll, March 2022.  Inflation (together with oil prices) and the economy in general were by far, the principal concerns of Americans. See: https://news.gallup.com/poll/391220/inflation-dominates-americans-economic-concerns-march.aspx