The Recession in Housing

It’s not much news to anyone to declare that housing is in a recession. In fact, it’s been widely reported as a fact, even though there is no bona fide arbiter of such a call. You know a recession when you see it or feel it.  Prices still remain high, but sales of existing homes in California are off 35 percent since July. And selling values are now following though they are unlikely to decline proportionately. 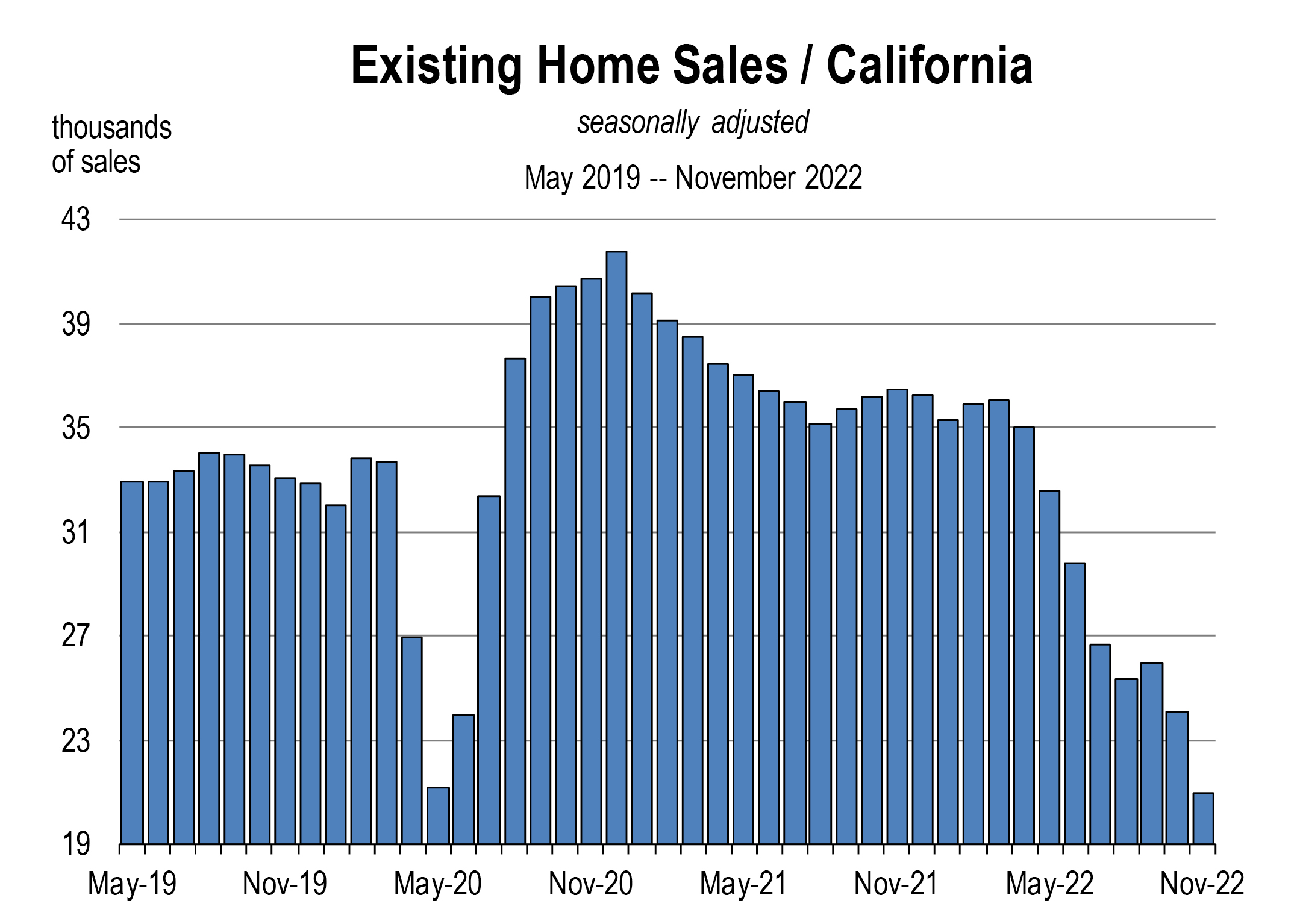 Despite (1) recent decreases in mortgage rates and (2) falling home prices, pending home sales are falling rapidly. Monthly mortgage payments remain high relative to incomes. This is keeping buyers, especially first-time home buyers, on the sidelines. Furthermore, homeowners  who had intentions to sell, are reluctant to list their homes for sale after having locked in record-low interest rates during the pandemic.

The stalemate between buyers and sellers will continue as long as the Federal Reserve keeps monetary policy tight and the prospects for a general recession remain uncomfortably high.

New Homes and the Sentiment of Builders

The Housing Market Index, a closely watched industry metric that gauges the outlook for home sales, declined to 33 in November on a hundred-point scale, the lowest level in a decade (excluding the April-May 2020 lockdown period). The higher the index, the more optimistic builders are regarding housing market conditions, and conversely. 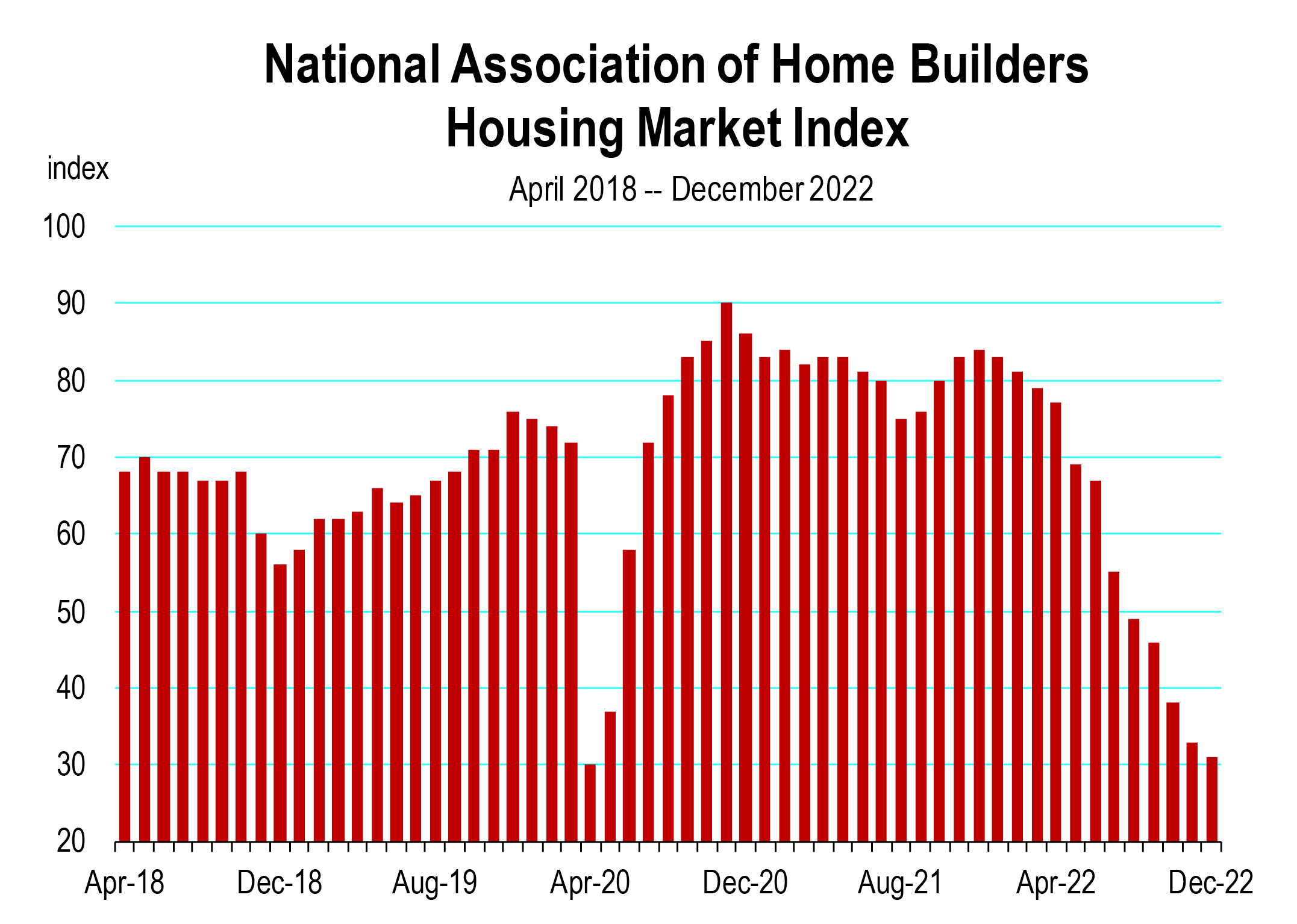 The NAHB/Wells Fargo Housing Market Index is based on a monthly survey of National Association of Home Builder members designed to take the pulse of the single-family housing market. The survey asks respondents to rate market conditions for the sale of new homes at the present time and in the next six months as well as the traffic of prospective buyers of new homes. 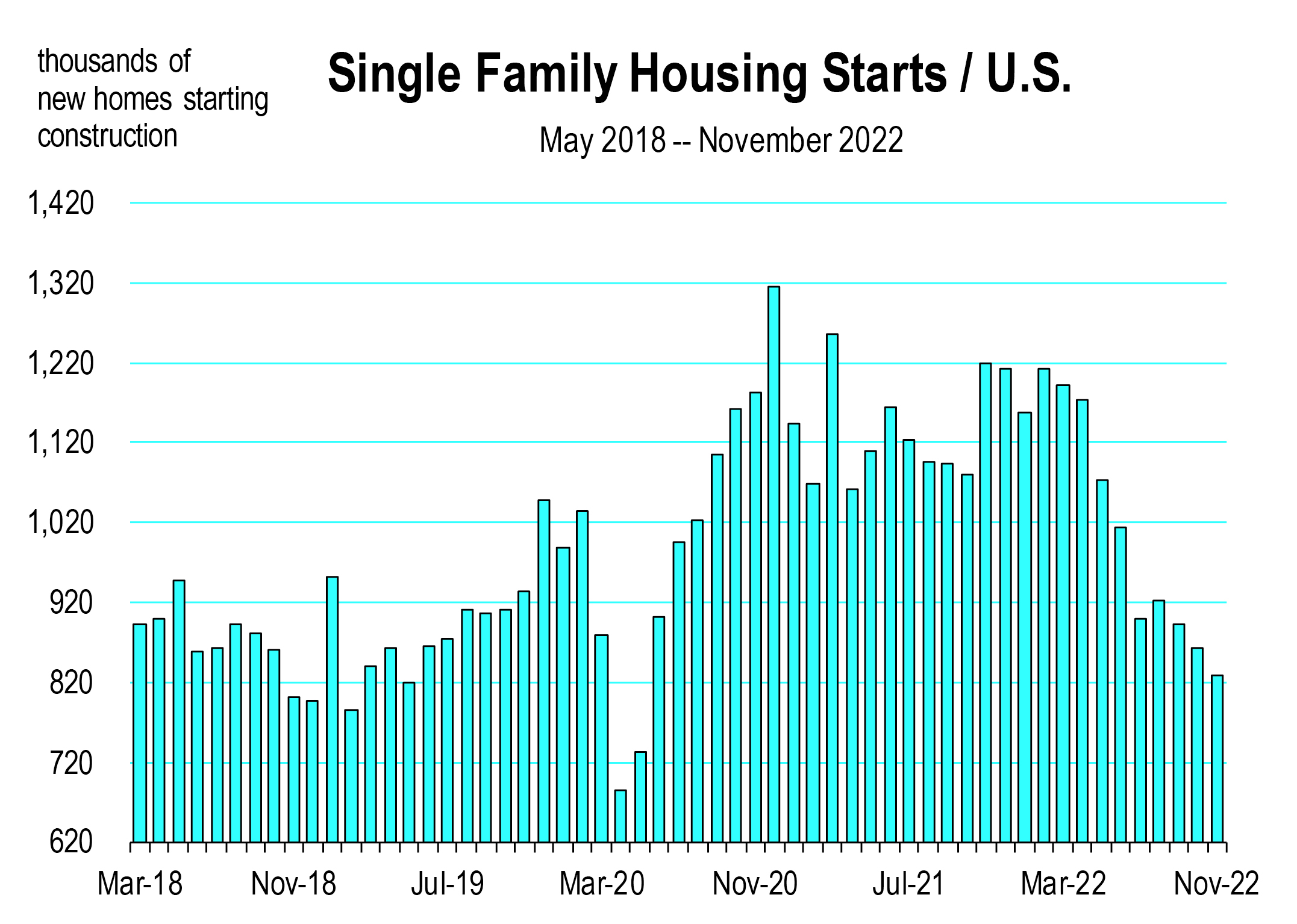 Sales, housing starts, inventory, and the direction of prices all point to additional stress for the first half of 2023, though there is some glimmer of hope regarding the movement in mortgage rates. The interest rate on a 30-year fixed rate mortgage fell to 6.3 percent during the week of December 20th, after peaking at 7.1 percent in October.  It is currently hovering around 6.5 percent. 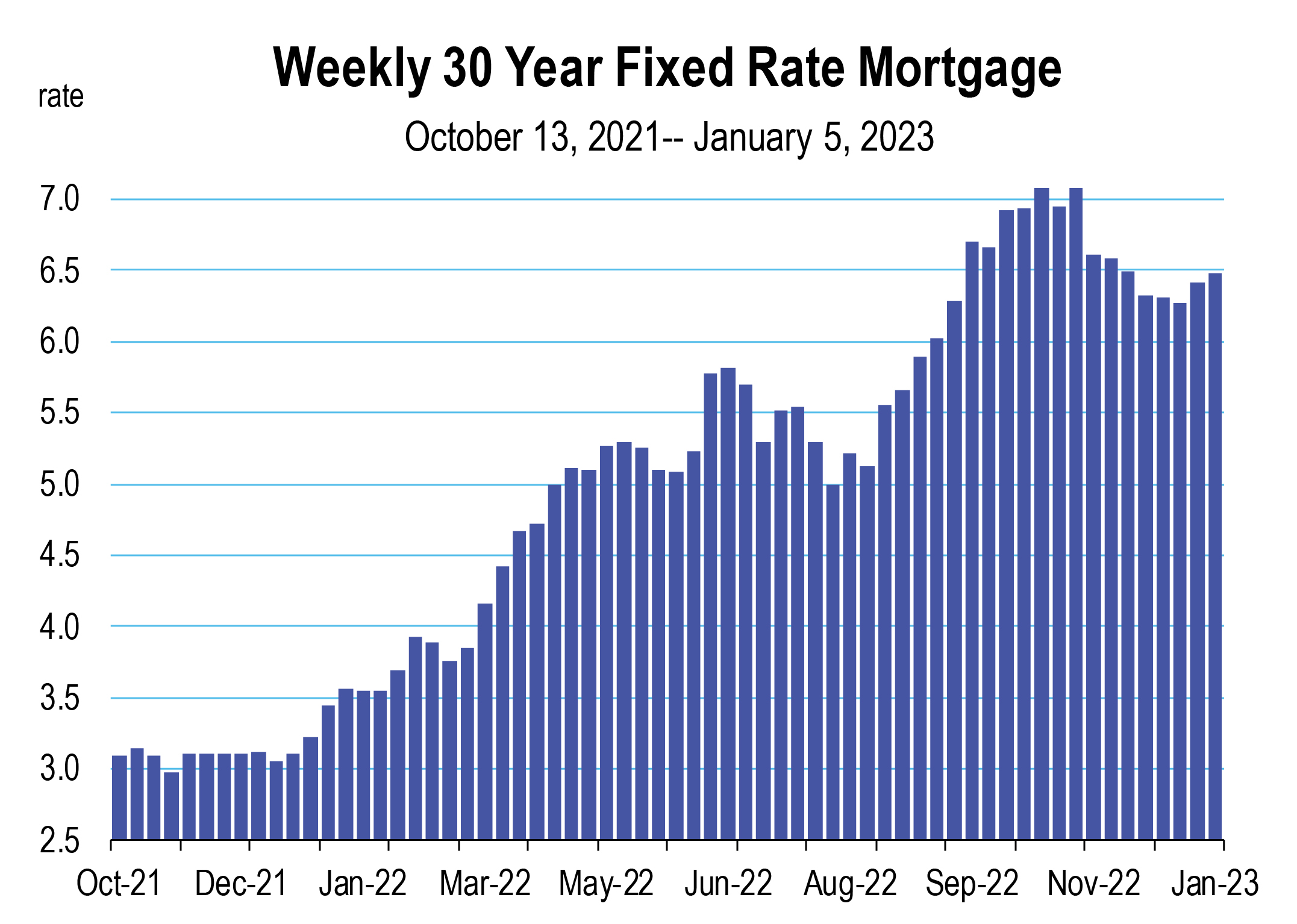 The next Federal Reserve Open Market Committee meeting (where interest rate policy is enacted) is more than a month away. More evidence on how inflation is being tamed will be out next week. Will the Fed hike the fed funds rate 50 basis points or just 25 at the next meeting? It will depend on the December CPI report due out next week and other indicators that directly or tangentially contribute to inflation.

Either way, there is no doubt that the economy is slowing and a recession is likely.

A more general recession would intensify the housing downturn. This is because household incomes frequently decline in a recession, and adjusted for inflation, they are declining now.

The Fed initially starting raising interest rates, in part, to seed a “correction” in an overheated housing market. Home prices rose more than 40 percent from the beginning of 2020 to June 2022.

The Case-Shiller Housing Price Index adjusts for the mix of housing that is selling. Higher end homes tend to sell less frequently and are subject to a larger price adjustment. Affordable home prices will adjust less because they are in greater demand. Home prices are clearly in decline and have been since the spring of 2022. All housing price measures are demonstrating contraction, including the Case-Shiller index. 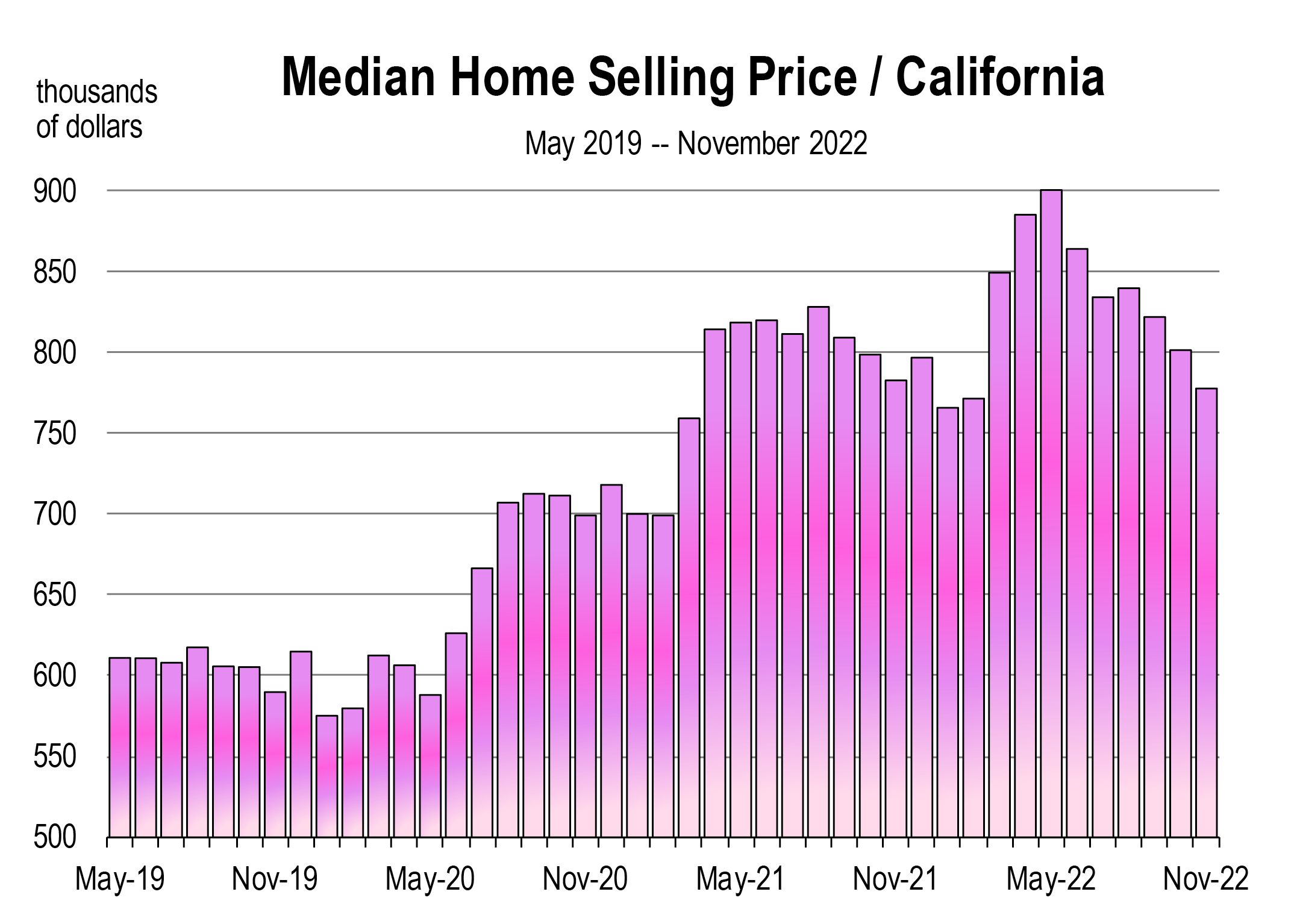 Surprisingly, despite the precipitous fall in home sales, the real estate recession does not appear to be affecting direct real estate sales employment in California. Well, at least not yet. Now it’s true that real estate brokers and agents are largely self-employed and do not show up in the W-2 employee counts. But the number of agents still tend to move in tandem with W-2 employees within broker offices, and the evidence does not indicate any contraction there. That’s not to say however that the current level of residential real estate business has not impacted many sales agents in real estate.

Where there is clear contraction is in the mortgage lending sector, because lending has all but dried up. Job counts have been in decline since April of 2021,  though they are curiously still higher than at anytime during 2019.

The predicted trajectory of real estate for the next 6 months is a continuation of the last 6 months. The first half of 2023 will be a difficult period, but not just for real estate.  There is now evidence that employment in manufacturing has turned down.  I can’t see any other significant weakness however.  In general, labor markets are unequivocally strong at the start of the new year.