Well the title should actually read: “It’s the Economy Stupid.” I hope that got your attention because you’re gonna want to read this final feel good edition of the newsletter for 2017. 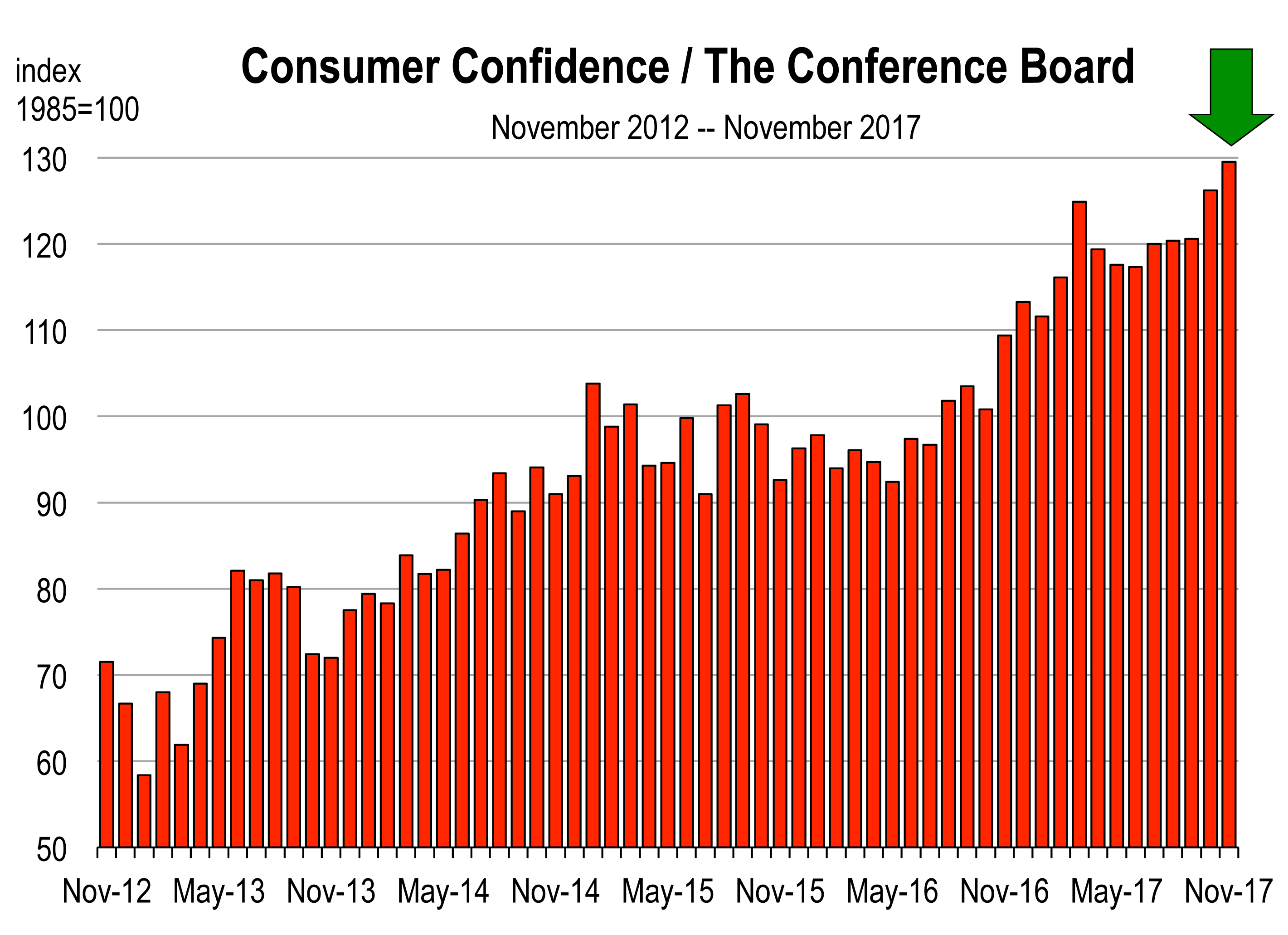 If you will recall, that was the old campaign slogan of Bill Clinton in 1992. And it’s still true today because it’s the answer to the question of why American households feel so optimistic about their economic futures. Except this time, conditions are stellar rather than lackluster as they were for much of 1992, prompting the regime change from Bush to Clinton.

Despite record numbers of retail closures this year, horrific fires, hurricanes, Kim Jong Un and an ugly World Series game 7 (for the Dodgers), the consumer confidence index rose another 3.3 points in November to the highest monthly reading in a generation, or since December 2000. Americans view their current and future job prospects very favorably; ditto their income growth and their spending levels. Consumers have been the strongest and most consistent source of growth in the current economic expansion.

The increase in household wealth has been stunning as wages are rising and stock and house prices have surged. 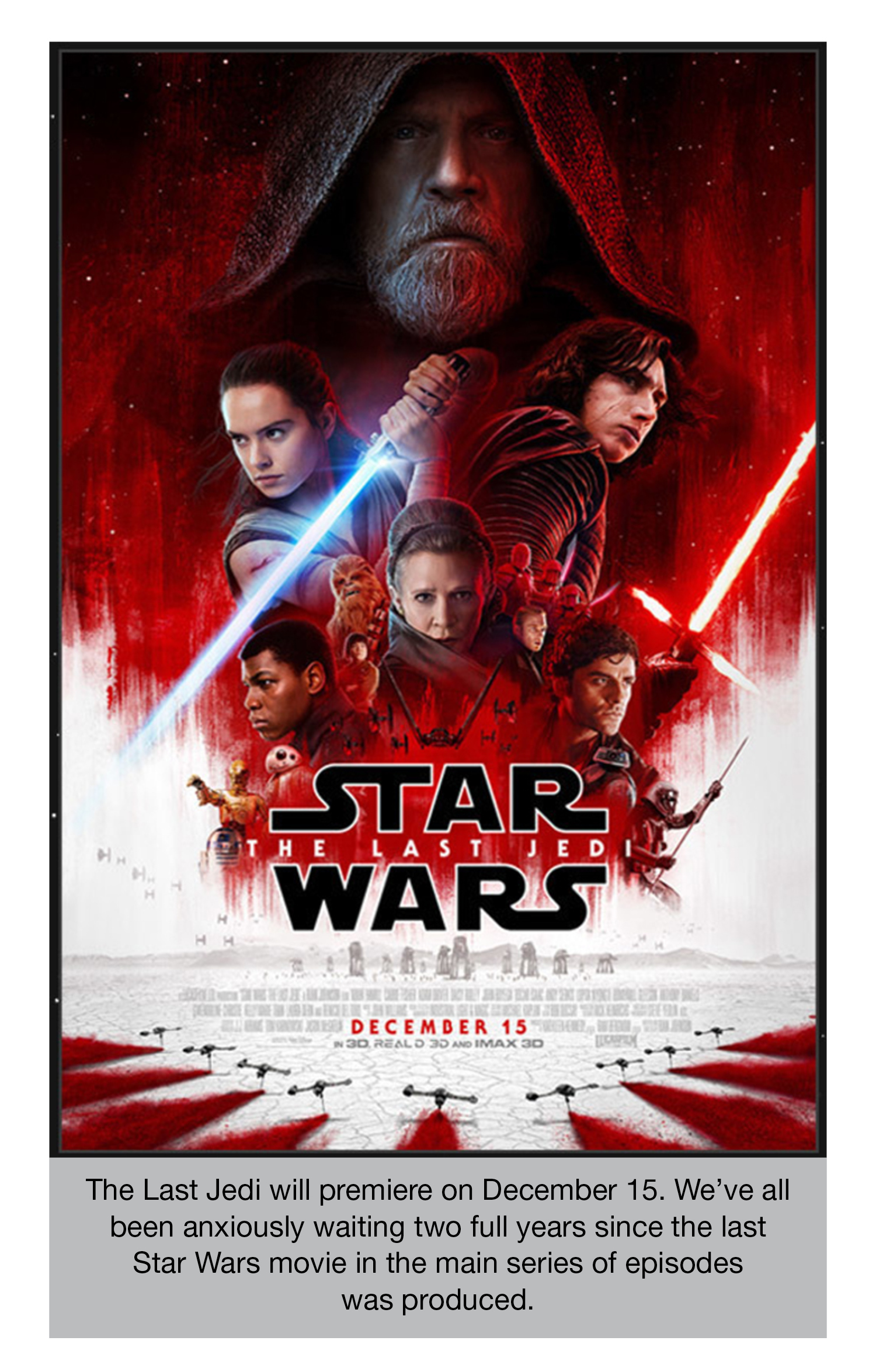 Last week’s Gallup U.S. Economic Confidence Index rose sharply, at more than twice the rate as the average weekly gain observed over the past year. Like the Consumer Confidence Index, the Gallup pole measures American sentiment regarding both current and future economic conditions. The Gallup current condition component of the index rose to its highest level since Gallup began tracking economic confidence in 2008.

The confidence indices are now at some of the highest levels ever recorded. Why? Because economic growth is accelerating, everyone has a job, incomes are rising, homes are selling, and the new Star Wars movie is about to be released.

Speaking strictly in terms of the economy, 2017 has been a good year and perhaps the best year during this up phase in the economic cycle, which began in July of 2009.

We are now in year 8 of the economic expansion and by next summer, we will be in year 9. Economic expansions rarely go for 9 years but this one is clearly headed that way. We have no indications at this time that the economy is vulnerable. And fortunately, there are no bubbles, except for Bitcoin. 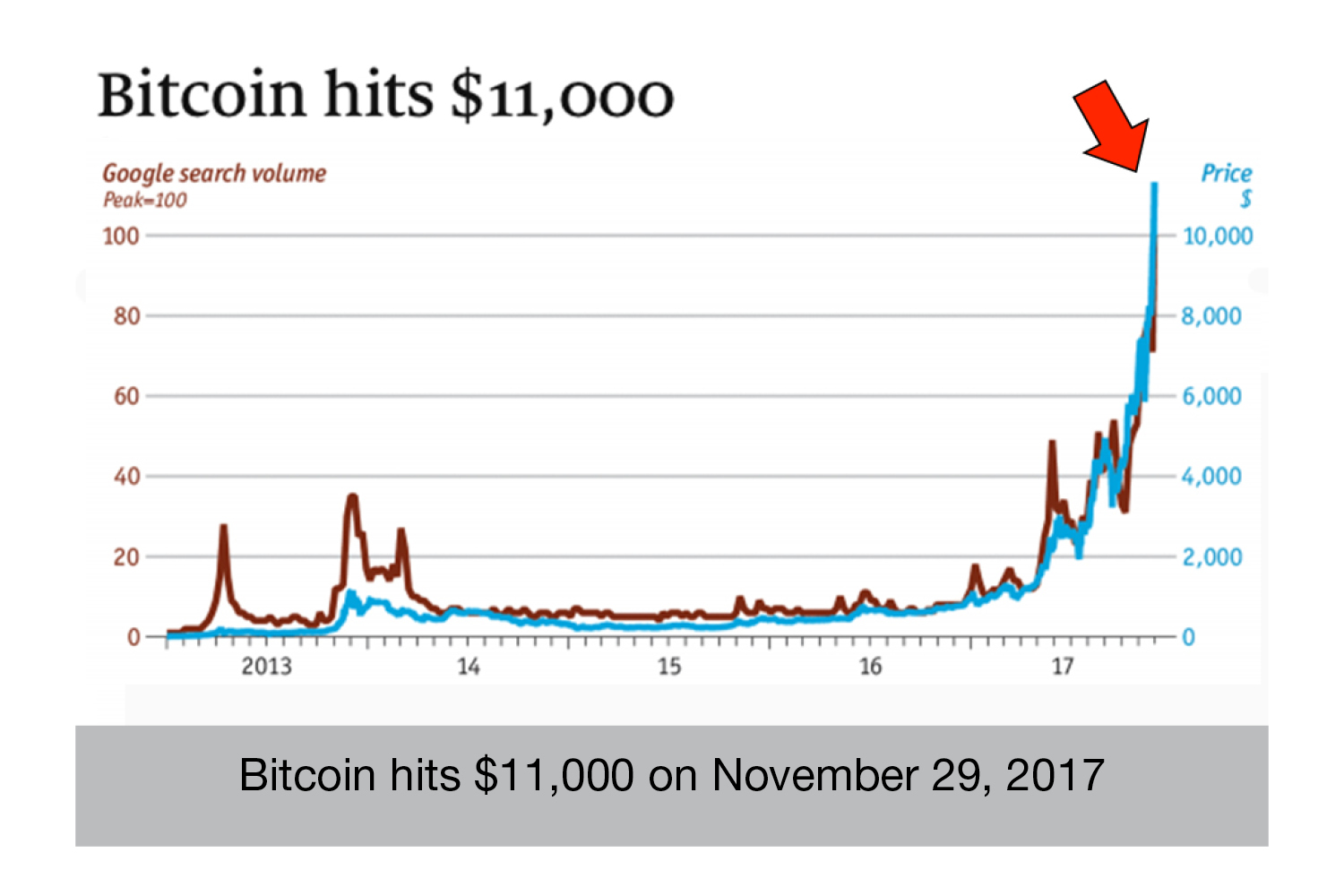 The economic expansion continues to power forward. Recent economic data have exceeded expectations and in some cases by a wide margin. Along with strong confidence in the economy, the unemployment rate is the lowest since 2001 and October existing home sales rose to their highest level since 2007. 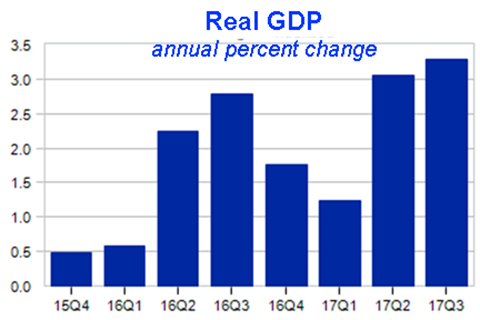 Furthermore, third quarter 2017 gross domestic product growth was revised higher, from 3.0 percent to 3.3 percent. The nation is now growing at the fastest pace since 2014. We are likely to see approximately 2.7 percent growth in the current quarter of 2017 with consumer spending leading the charge. Remember, hundreds of thousands of vehicles need to be replaced in Texas and Florida. And tens of thousands of homes need major repair.

The likelihood of recession over the next six months is now at the lowest level since the risk of recession index was invented, back in 1996. If there is a chance that the economy will change over the next six months, it’s likely going to be faster growth because of impending tax cuts, fire and hurricane rebuilds, infrastructure spending, and a rising stock market which is already at record levels.

The Senate Finance Committee passed its tax reform plan. The full Senate will now consider the bill. The potential for tax reform is a further contributing factor for high consumer confidence and record stock valuations.

OK, Conditions Appear Safe for Now but What are the Seeds for the Next Recession?

A myriad of conditions can produce a recession, but the ones that we can identify in the current environment are these:

The Federal Reserve is expected to hike interest rates in December and several times in 2018. Despite low inflation of 1.3 percent in the core consumer price index, the Fed will decide that GDP growth is strong enough to boost the short-term federal funds rate to 3 percent by 2020 from 1.25 percent today.

Long-term rates that affect mortgages are likely to stay low if inflation remains contained, which we expect to be the case for a while.

So while the fed is trying to tighten monetary policy, their prescription for raising (normalizing) interest rates is very conservative and cannot be interpreted as “overly” in any sense of the word.

A supply shock is just that, a jolt to the domestic or world economy that is a shock, or unanticipated. We can’t predict one and it’s unlikely to happen. We do see that geopolitical risks are rising especially between North Korea and the U.S., so we are watching this with particular interest. But we can’t otherwise predict a random event.

Another financial crisis is also very unlikely because of regulations put in place since the last financial crisis. Banks are quite healthy today. Nevertheless, international incidents including defaults by entire countries (like Greece or Spain) might always occur, especially in the very slow growth environment of Europe. We don’t see this as a major risk, nor even a minor one. The European economy is actually strengthening, as is much of the rest of the world.

At this writing (December 2017), it appears that we will avert recession for another year. So plan accordingly. 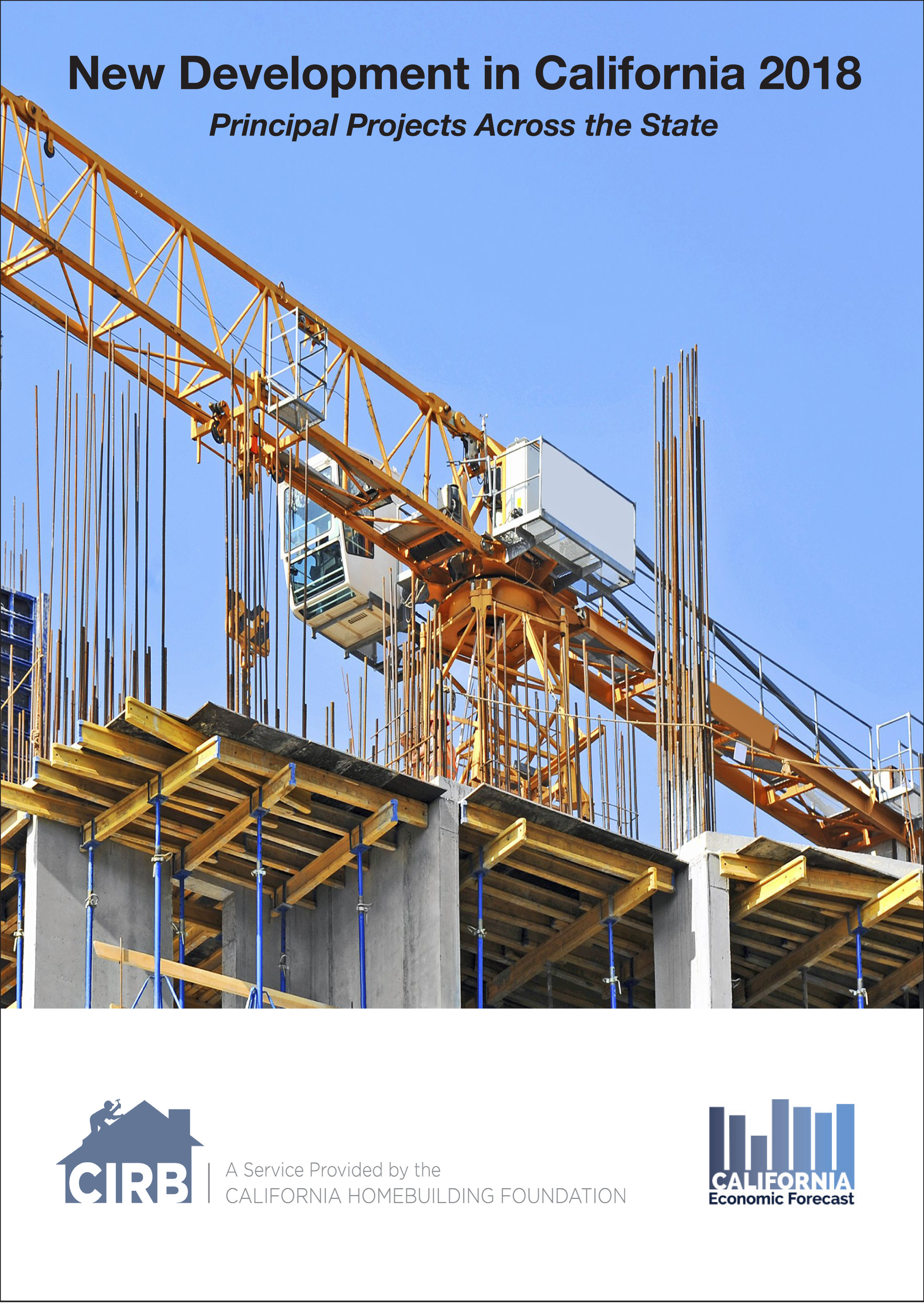 The new 2018 Edition of the New Development in California report is now ready for purchase.

The report documents the principal new non-residential and residential building projects under construction or in the pipeline all over California. This is a must report for all construction and building material contractors, and anyone that needs to understand the new development environment by region in California.