Fall 2019: We Need You in Construction

October is the month for stock market corrections, Octoberfest, Halloween parties, the baseball playoffs, clarifying the NFL contenders, and for the last two years, it’s been the month of natural disasters or their immediate aftermath.

I’m referring to the October 2017 fires in Northern California, and Hurricanes Irma and Harvey a month earlier. Then last year at this time, the ashes were just cooling from the Carr fire and the winds were beginning to blow that ultimately precipitated the most destructive fire in California history—the Camp fire in early November.

For this year to date, cross your fingers because there’s been nothing much yet. Instead we are observing that the major rebuilding efforts from the past calamities are well underway. Thousands of new homes are being built in Sonoma County. Home rebuilds from the Thomas fire are fully underway in Ventura. The first 50 homes from the Camp fire started last Spring with a handful now completed. And also underway are homes in Malibu where 475 were completed destroyed in the Woolsey Fire.

Replacement building is ongoing in Shasta County and in Mendocino and Napa Counties. The economies of all these regions are being lifted by the windfall influx of insurance payouts to replace structures, automobiles, furnishings, furniture and landscaping. How much payout? $12 billion in 2017-2018 and another $12 billion in 2018-2019.

An estimated 23,992 homes were destroyed by the fires of 2017 and 2018, and another 2,181 were damaged. Research at the University of Wisconsin determined that 94 percent of buildings destroyed by California wildfires between 1970 and 1999 were rebuilt. Consequently, we are expecting most of the recent destruction to be replaced.

If you can do construction, you can get a job just about anywhere in California. Even if you know nothing, you will get hired and trained. If you’re in the Bay Area, there’s a building boom occurring in the City, in Santa Clara and in the East Bay. Fire rebuilds are now demonstrably underway in Sonoma and Napa Counties.

If you’re in Ventura, Thomas fire rebuilds are finally moving along. If you’re in Sacramento, housing projects are occurring or planned all over, and workers are in high demand. If you’re in Fresno County, the high speed rail project is still underway, employing more than 3,000 construction workers. Also, there are more housing and industrial projects ongoing throughout the Central Valley region, especially to the north in Madera and San Joaquin Counties. 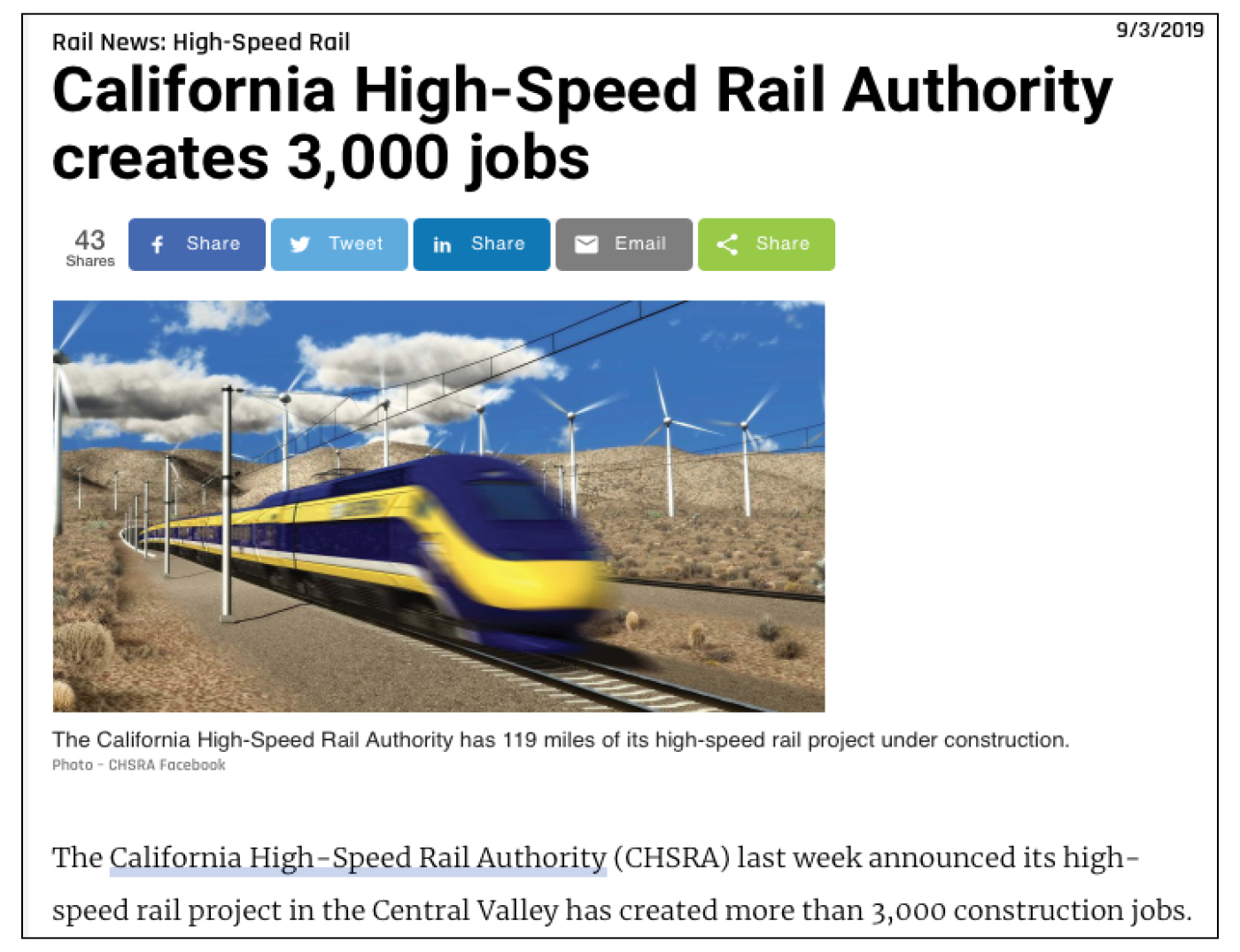 In Los Angeles, the downtown area is a sea of cranes and tens of thousands of apartment units are under construction. Ditto office buildings. The development of new structures is one the most visual business activities in Los Angeles County from Santa Clarita to San Pedro.

The rebuilding efforts together with the development booms in the major metro areas of the state have resulted in a fully employed construction workforce that has benefitted from an average 4.3 percent annual wage increase since 2015. The average annual earnings for a California construction worker now exceed $70,000.

Are you having difficulty getting a contractor to bid on your bathroom remodel? If not, is it a competitive bid? It would be more competitive if the state was not flooded with construction work, from fires, to high speed rail, to building booms everywhere else. 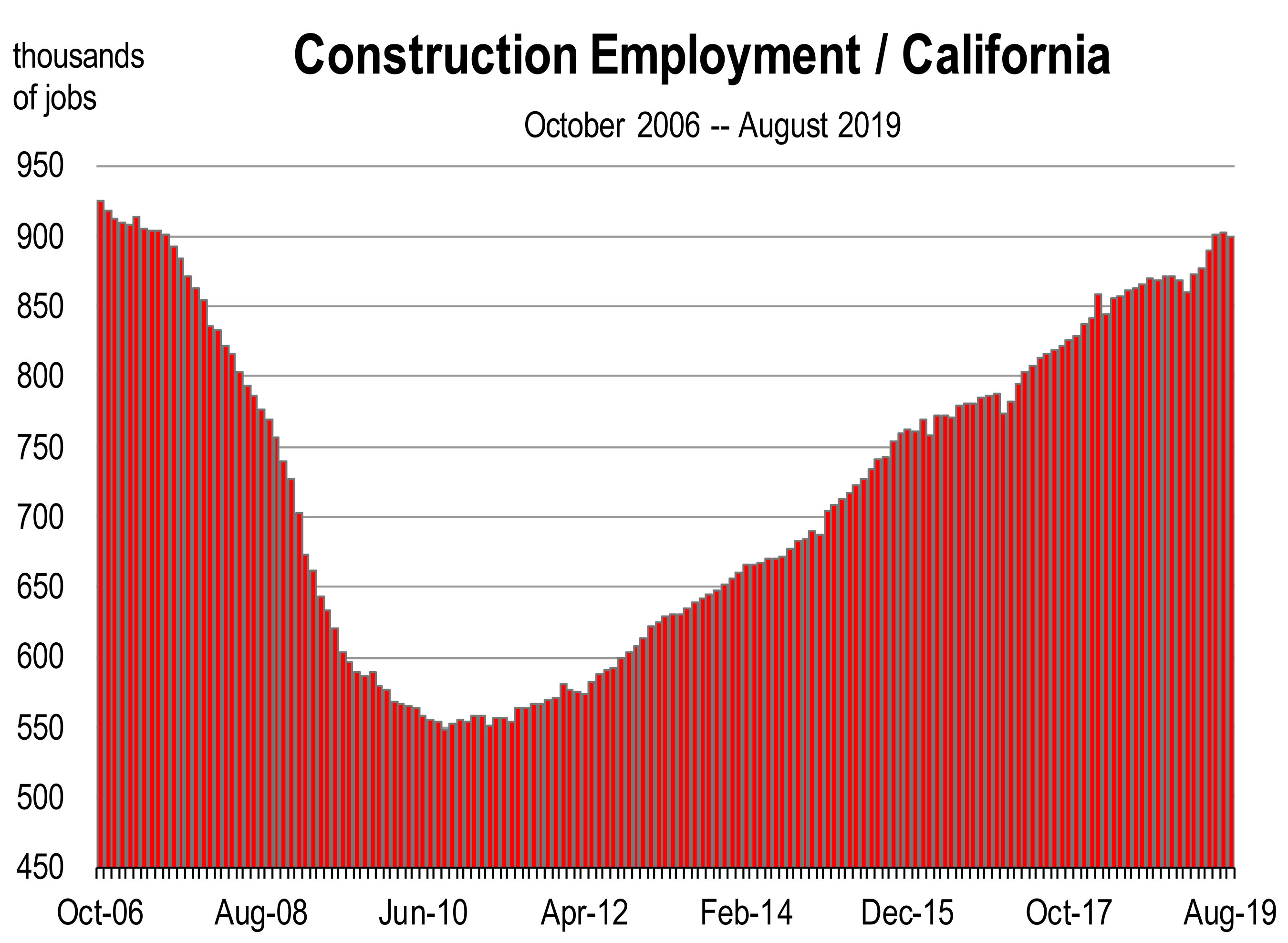 New and replacement development is a principal engine of growth in California today and construction employment is nearing an all time record high in the state. This is also true nationwide and it’s being called a “shortage.” The National Association of Home Builders reported last year that 82 percent of its members believe that cost and availability of labor are their biggest issues. Back in 2013, only 13 percent of members worried about labor costs.

The impending recession is not likely to appreciably slow down this industry. There is too much momentum right now to build homes, complete Phase 1 of the high speed rail, and construct apartments in Los Angeles and San Francisco that are badly needed by the urban millennial workforce. Besides, much of this construction is foreign or institutional driven.

So if you’re willing to pick up a hammer, we need you now, and your position might even be insulated from the next recession.