Annualized GDP growth in the first quarter came in at -4.8 percent. The report doesn’t really provide information on the extent of the actual GDP decline that has occurred over the last 6 weeks or since mid-March.

GDP was tracking at about a 2 percent rate of growth in January and February (and likely the first 2 weeks in March). Consequently, over a two week period in which there was an abrupt and severe closure of the economy, the impact on GDP was crushing. And this has continued through April and likely will through much of May.

The rate of real GDP growth is likely in the vicinity of negative 35 to 40 percent.

The immediate loss of sales and then jobs and income is the first blow to the economy. Stay-at-home orders substantially limit spending even by consumers who are not losing income. The first quarter GDP numbers show that the principal pullbacks on spending were restaurants and bars, airlines, and healthcare.

Stimulus checks and unemployment insurance are offsetting some of the impact but it’s tiny in comparison to the losses being suffered. Only half of small businesses that applied for PPP funding received it in the first round.

A second blow to the economy affecting households is diminished wealth. Losses in the U.S. stock market are 25 percent, even with its recent recovery. The negative wealth effects—the change in consumer spending in response to a loss of wealth—are and will continue to be substantial. The baby boom cohort, now in its late 50s to early 70s and owning 60 percent of all stock value, has become particularly reticent about spending.

Stay-at-home mandates are wrecking the economy, not only in the present but for the future. The longer the present carnage persists, the longer the recovery period and the higher the chance for subsequent business failures and persistent unemployment.

In a recent Goldman Sachs survey, 23 percent of small businesses are not confident they will survive. This number will grow if these firms are not allowed to resume business. 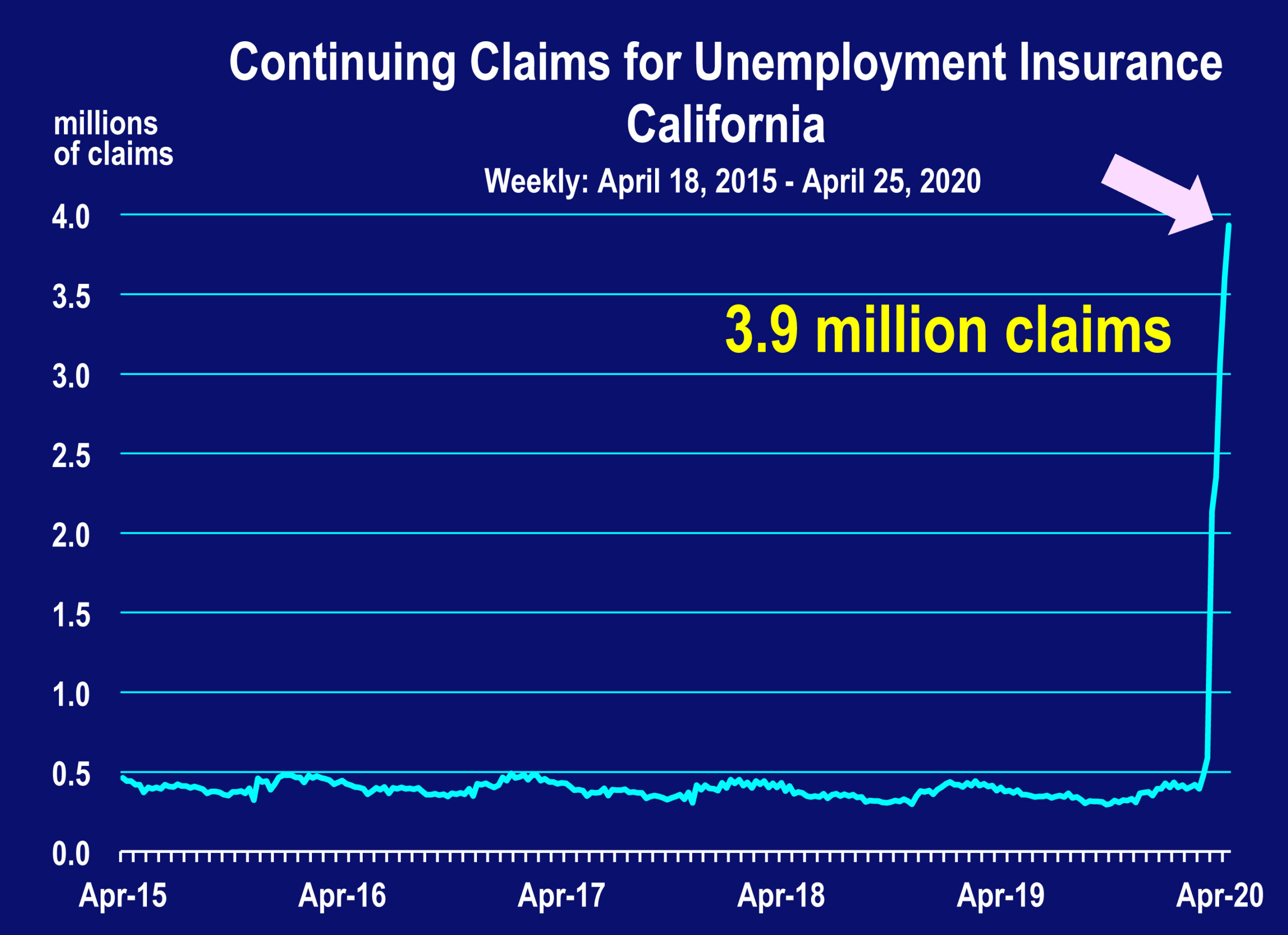 The Bay area shutdown has now been extended through May. This was a characteristic of the pessimistic scenario we described in the April newsletter which we hoped to avoid.

While the Governor has formulated a plan, no date has been scheduled for easing shelter-in-place in California. Meanwhile 15 other states have already or will open partially by May 4. This puts California behind the rest of the nation and many European Countries that have recently opened or never closed.

The rock bottom of the crisis on the economy has probably been reached. The unemployment rate in the nation was 20.1 percent this past week. For California, it was 23.8 percent. 3.9 million California workers are receiving unemployment insurance due to layoffs. We estimate an additional 1 million workers that are laid off or have substantially reduced hours.

Federal rescue money will now start circulating through the economy in earnest. The injection of stimulus to small businesses will help to prevent further layoffs and generate some “rehires.” Disaster relief funding will do the same as will the Federal Reserve Banks’s new loan program to larger businesses.

So from right here and now, and as other States start to come back, we believe we have moved to the recovery phase of the recession.

And the speed and length of the recovery is entirely dependent on the guidelines and protocols enacted by States on businesses when shelter-in-place orders are eased.

Capacity limitations of people in places of public gathering hinder spending and therefore revenue earned by business. Reticence to enter public places by consumers will be another limiting factor on demand. Consequently, businesses face a tough uphill challenge on the road to recovery unless or until restrictive distancing rules are removed.

But what’s the chance of that? This is not my area of expertise, but health officials are telling us “not likely until a vaccine or a cure for COVID-19 is developed and disseminated.” Consequently, we are in this for a longer period than people, including those making key decisions, generally realize.

Watch for our regular updates on the U.S. and California economies during the pandemic and the lockdowns. Follow our COVOD-19 page to be the first to understand the extent of the fallout and the first to see the beginning stages of the recovery.