Trumponomics and the First 100 Days

While there has been Zero on Congressional Legislation, there is no Evidence of any Economic Struggle

There were a myriad of campaign promises including tax cuts, repeal of the ACA, infrastructure spending, defense spending, regulatory relief, and beefed up borders. Some border beefing has occurred, and a flurry of executive orders have prevailed, some successful and some not.

A serious review of our trading conditions with China and our immediate neighbors was also on the agenda during the road to the presidency.

These are most of the hallmarks of Trumponomics. How have these pledges faired in terms of the economy?

The pledges seem to have been invigorating. The U.S. economy is performing remarkably well, and its near-term prospects remain stable with virtually no chance of slowing. Real GDP growth is tracking above 2% in the current quarter, above the growth rate that has prevailed throughout the nearly eight-year expansion. Furthermore, economic growth has upside potential this year and next when you consider current stock market valuations which are near all time record highs. 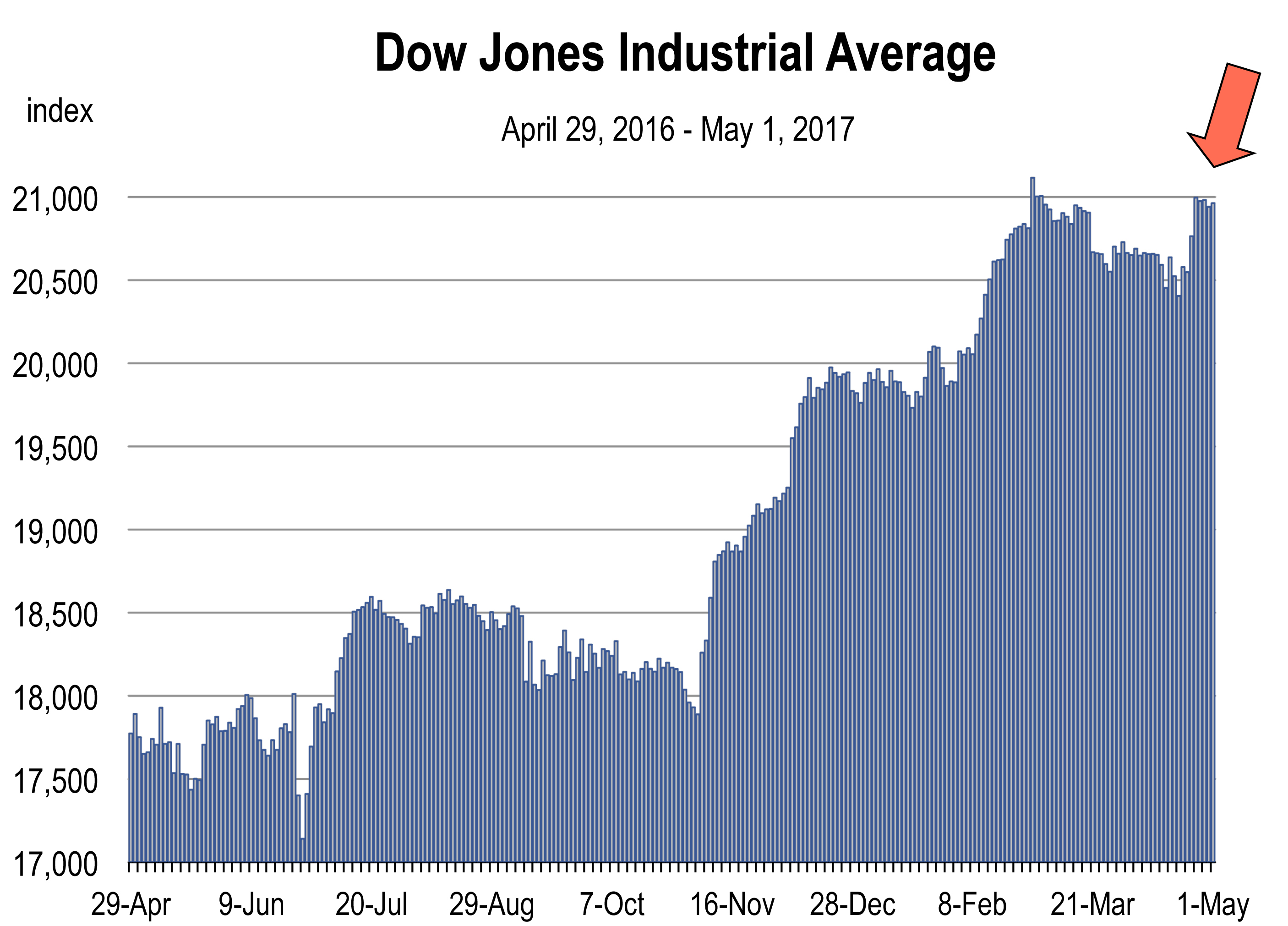 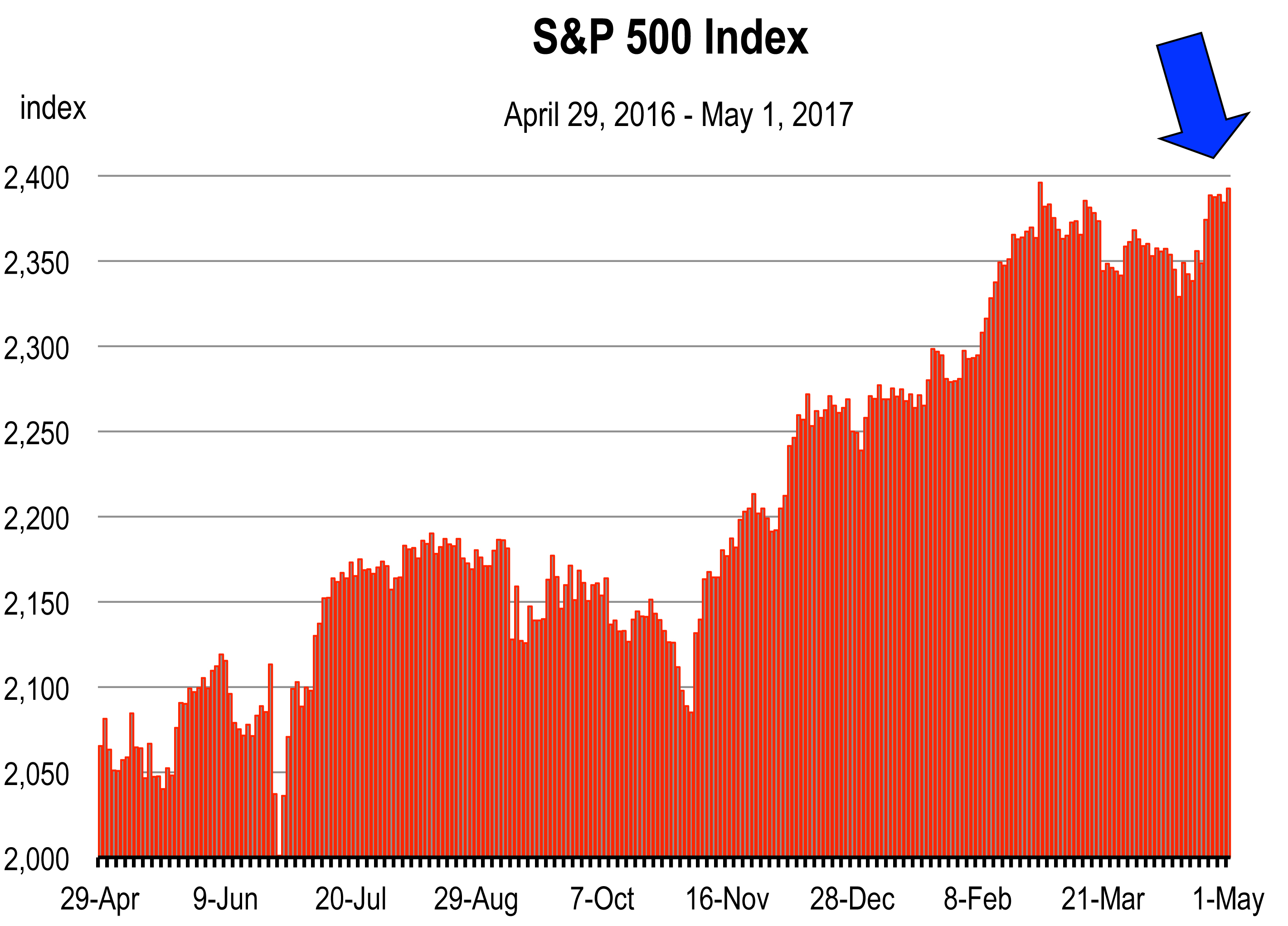 Job growth also remains consistently strong, with the economy enjoying the longest period of consecutive monthly job gains in history. And at close to 175,000 per month, the current pace of underlying job growth is more than double the pace needed to absorb the increase in the working-age population. The job market thus continues to tighten.

The lack of any legislative policies passed by Congress to date during the Trump presidency is having little if any impact on Wall Street or Main Street.

Americans on Main Street appear complacent, if not euphoric. Consumer confidence has been surging since the November election and is currently at the highest level since 2000. This means that optimism among the lion’s share of U.S. households is at its highest point in a generation.

What has Happened in the First 100 days and Does that Matter?

Many people believe the first 100 days is an important benchmark because great presidents have scored many victories in their first 100 days. But because the economy shows nothing but strength so far this year, it does not appear to care.

The President talks, Sean Spicer talks, CNN talks, and Fox News talks. Businesses and consumers clearly understand that the gears of Trumponomic policies are turning and that any legislation in the current environment moves slowly, especially with the high degree of political divisiveness in America today.

Currently, tax policy, the border wall (or fence), the identification of infrastructure projects, and regulatory reform are all being discussed during the first 100 days on the national stage.

Through a series of executive orders, Trump has rolled back or delayed the onset of regulations
costing billions of dollars in federal funds to enforce.

In fact, last week’s announcement of the proposed tax calls for a material reduction of tax brackets and a substantial increase in the standard deduction. Estate taxes and the alternative minimum tax would be repealed. Corporate tax rates would be reduced from 35 to 15 percent.

More than 50 infrastructure projects have been identified. Details about how the U.S.–Mexican border would be fortified are now being weighed in on by experts and the personnel at the border.

The tough trade talk about China has cooled. Relations with China have suddenly improved, especially in the wake of new tensions between the U.S. and North Korea. For now, this has been a lift to Wall Street.

The tough talks about renegotiating NAFTA have moved to the draft plan stage. An executive action may be signed soon to withdraw the U.S. from the North American Trade Agreement and impose finished wood product tariffs on Canada. The markets have shown little to no reaction regarding the plan. 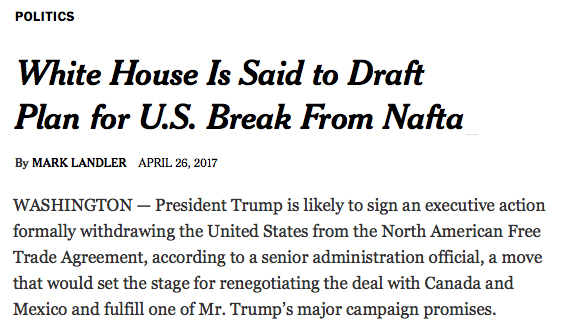 The first 100 days seems to be of symbolic importance to the media and talking heads on TV, but not to businesses or consumers. Trumponomic planning appears to be in full swing, and agents of the economy are convinced that this is enough for now.

So while legislative victories have been zero, the economy is moving full steam ahead towards a higher rate of growth in 2017.

Next Conference: Understanding Market Disruptors
The Business Environment is Changing. Be Prepared.

In June we are presenting the first annual 2017 Entrepreneur Economic Forecast Conference for Los Angeles.
Skirball Cultural Center
7:30 AM to 10:45 AM
June 1, 2017