What Happened to Higher Interest Rates This Year? 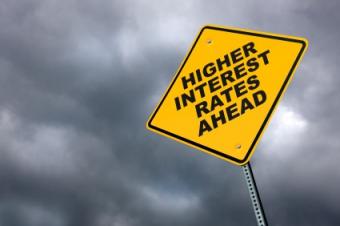 They were supposed to go higher in 2016—not sharply higher but noticeably higher nonetheless.

As you may recall, the Fed raised the federal funds and discount rates last December. This was the first such lift in rates since 2006. The conventional wisdom based on their remarks was that rates would be raised in a gradual fashion throughout 2016 and 2017.

But worries about the slowdown in China spooked the stock market at the beginning of the year and the Dow tumbled 1,900 points during the first 3 weeks of January. The U.S. manufacturing sector was sliding and durable goods orders were shaky. So the Fed held off raising rates in March. It’s now June and they meet on the 15th. Another rate hike is now called for but wait, the employment report for May that just came out last Friday was a huge downer. Is that going to dash (postpone) another opportunity to push rates higher? 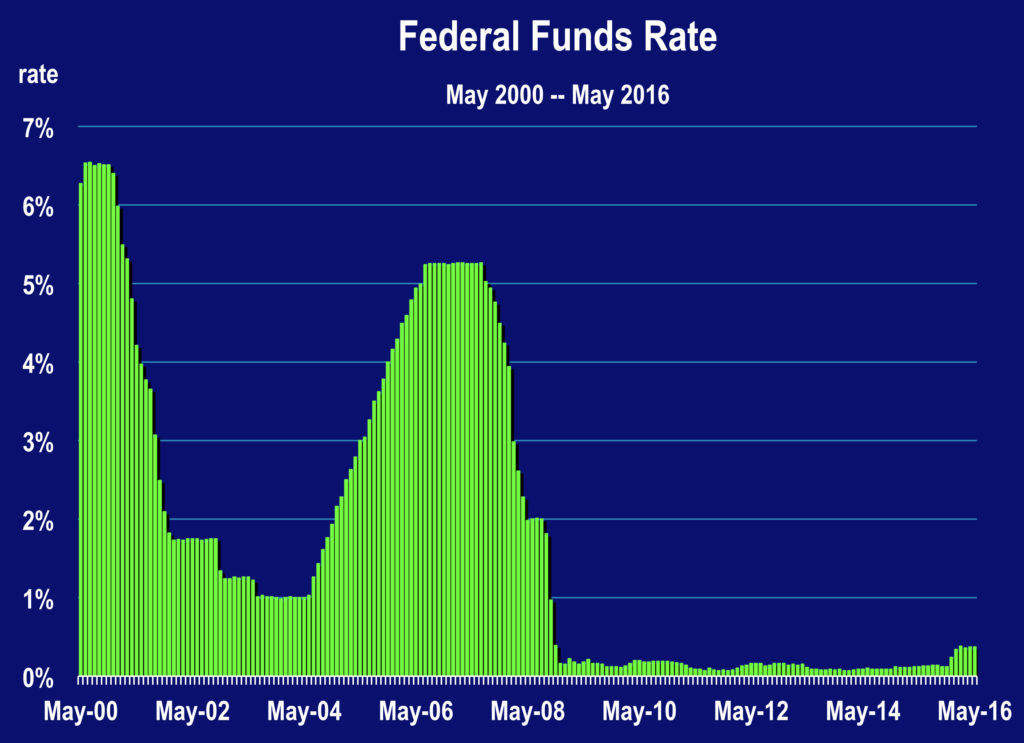 Perhaps…. or perhaps not. With the 10 year Treasury Bond yield falling to 1.64 percent on June 10, just a few days before the Fed meets, bond traders certainly don’t think the Fed will make another move. And one of the continued reasons cited is that as we get closer to the election this year, policy moves by the Fed will be interpreted as political, and I think they’d like to avoid that. But next week is far enough away from November and that’s why it’s a good option.

But it really doesn’t matter because another ¼ point hike in rates won’t impact much of anything. As the Fed has announced, a quarter point increase would be negligible but is a sensible first step to ensure the Fed stays ahead of inflation. Inflation remains on the radar screen and the Fed risks roiling world markets and pushing up the value of the dollar. 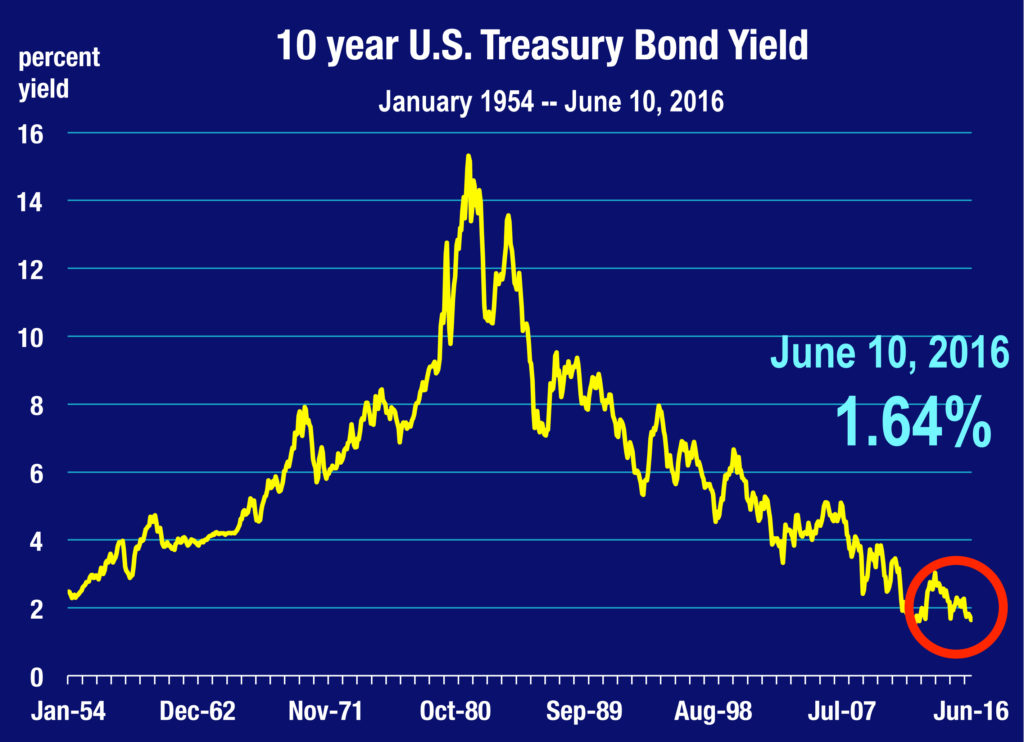 With the economy on the verge of full employment, there is growing evidence of wage and salary inflation, and that will translate into higher general price inflation than what we observe today.

With oil prices rising again, you probably are noticing slightly higher gasoline prices every week. There’s also a likelihood that your healthcare premiums will rise this year or next. And housing costs are clearly moving higher, for home buyers and for renters.

Higher expected inflation should push all market rates higher this year, unless those expectations are dashed because of offsets, such as a slower growing economy either here or abroad from our dominant trading partners.

Our forecast of inflation for 2016 is higher, and higher still in 2017. All the more reason why rate hikes are necessary, let alone warranted. The uncertain outlook for global growth should not stand in the way of the Fed resuming its path toward normalization of rates next week.

What is the Forecast for Rates Over the Next 18 Months?

Our forecast 18 months ago was for much higher rates today. But Europe got in the way, and then China. Now it’s the employment report, the presidential election, or whatever….

We are still sticking to a higher forecast of rates because the Fed wants to raise rates, the Fed needs to raise rates, and the market will push rates higher as inflation becomes more apparent. 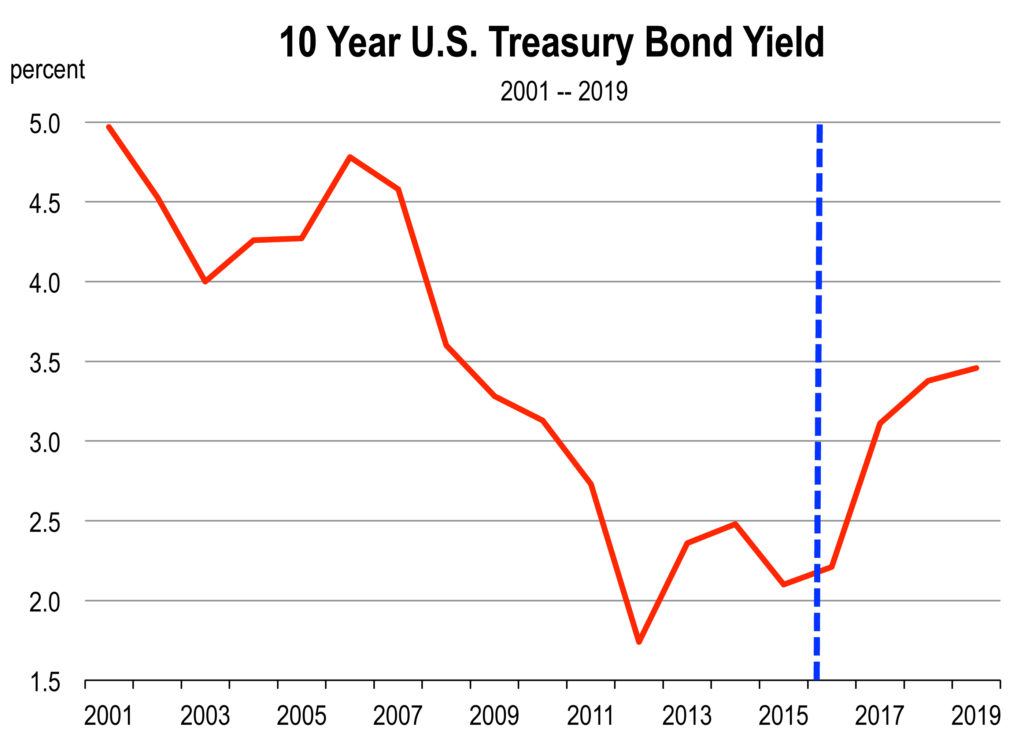 Speaker topics will include:

How long can the current expansion last?
What about interest rates and inflation?
The 2016 El Nino fizzled; can we tolerate another year of drought?
What are the recession risks going into 2017?
Is Ventura County still lagging its peers?
Has commercial real estate peaked?