Though Now Legal, Cannabis Sales (and Taxes) are Not Yet Meeting Expectations in California 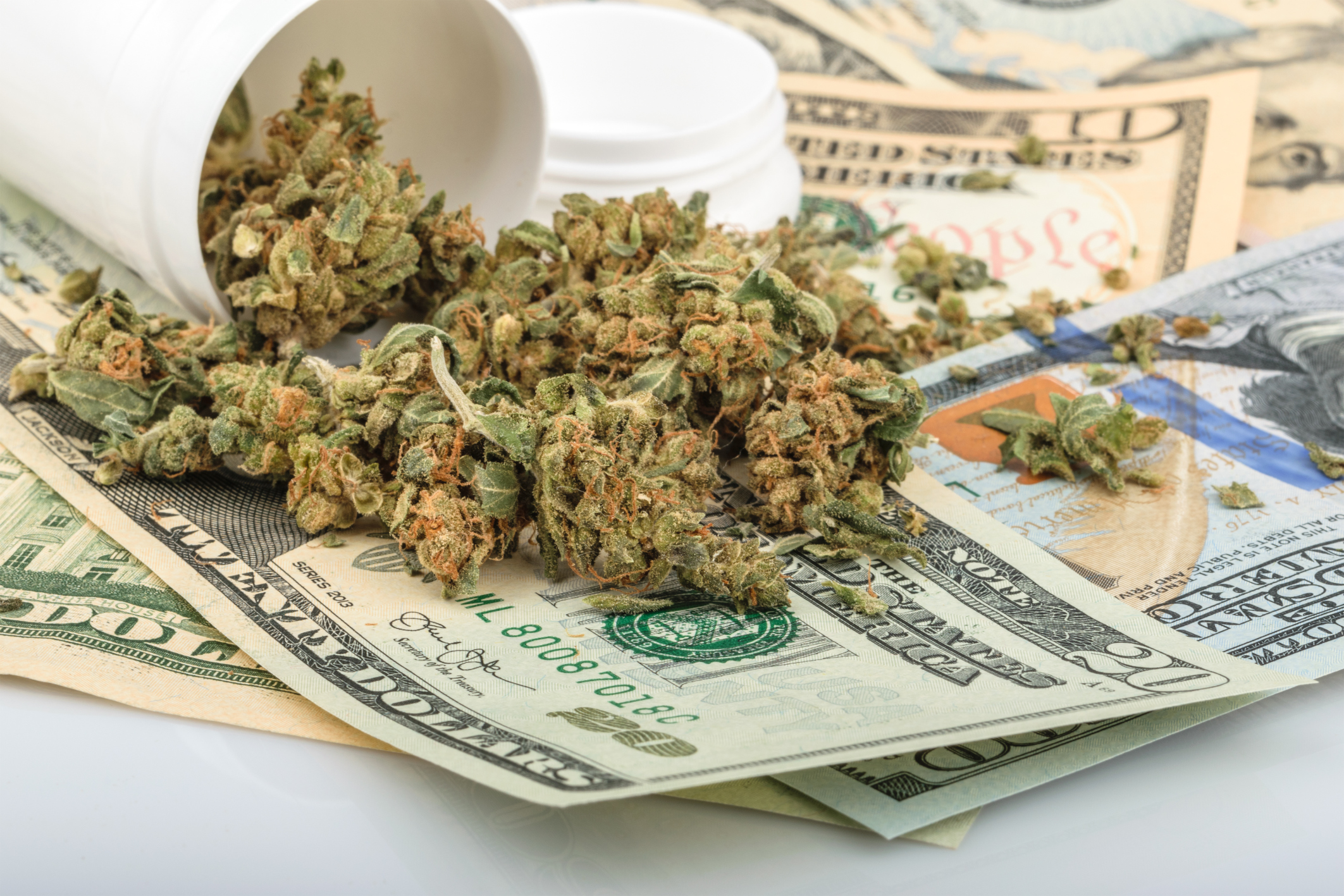 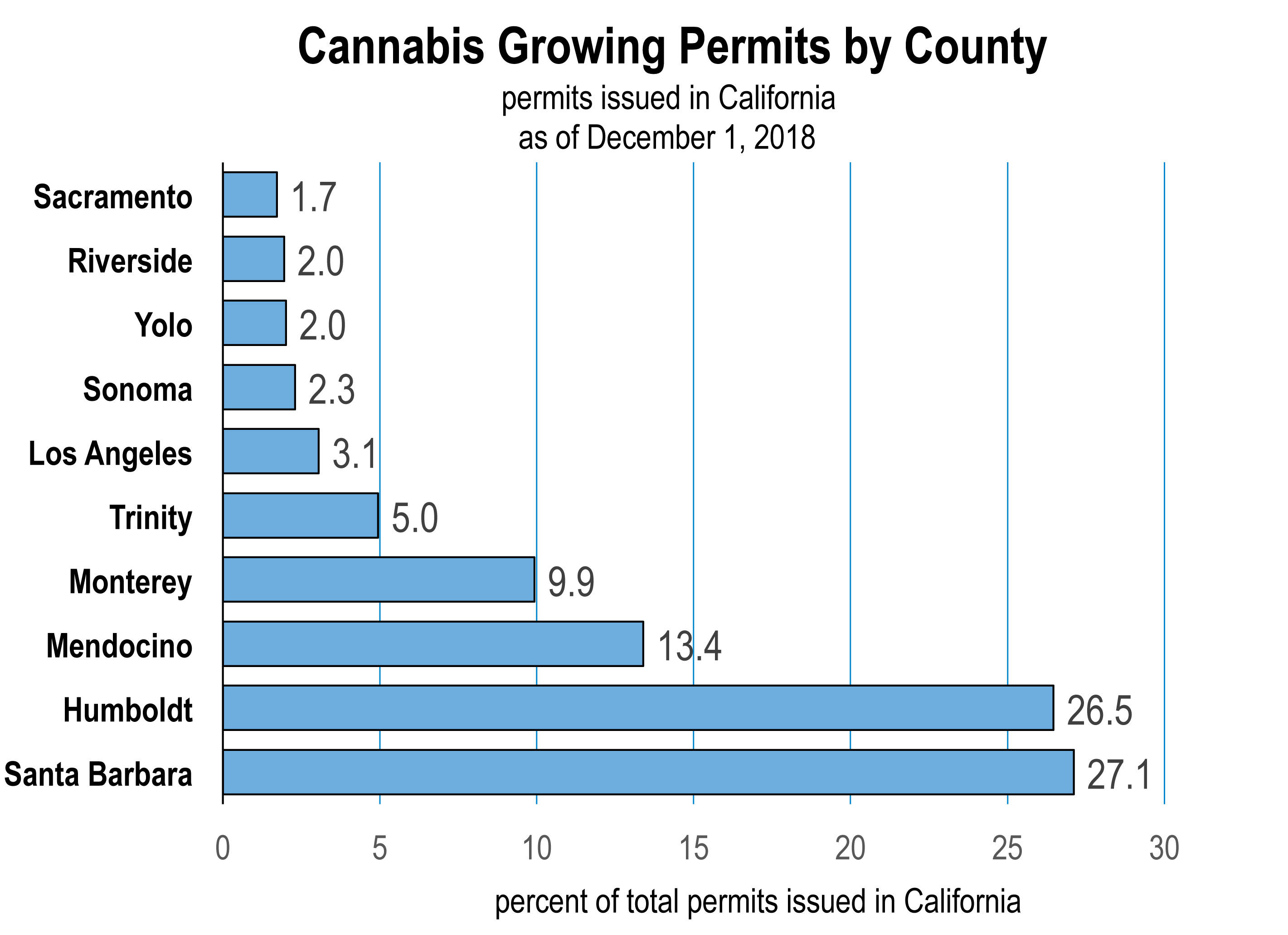 California launched legal recreational marijuana sales and began licensing all other industry businesses including cultivation for the first time on January 1, 2018.

Permits for licensed cannabis cultivation have been issued throughout California over the last 11 months. To date, 5,871 outdoor and indoor permits have been issued and as of December 1, 2018, 3,432 are currently active.

It is the large scale cultivation operations that have emerged in California this year, acquiring dozens of licenses for smaller growing sites which they can combine into a single cultivation area. While there have been nearly 6,000 permits issued to grow cannabis, the total number of unique growers is only 1,830.

Each small cultivation license enables a growing space of up to 10,000 square feet. But a grower can obtain an unlimited number of these licenses.

This is especially true in Santa Barbara County, where more licenses have been issued than anywhere else in California, and the ratio of licenses to unique growers is 10.8 to 1. 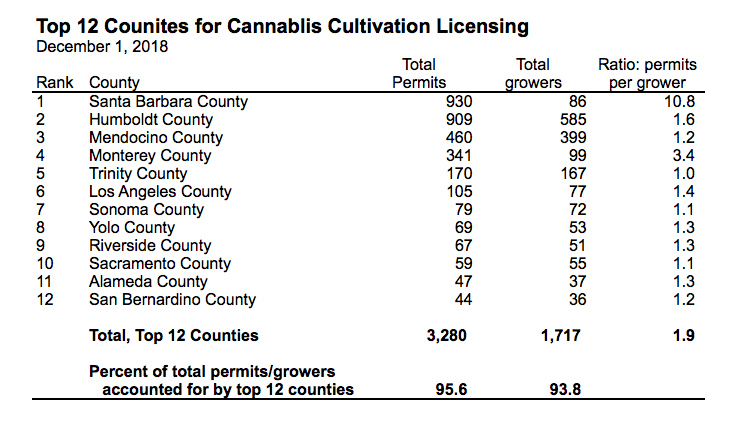 A recent study estimated the number of total growers in California at 68,150 in 2017.1 Consequently, if 1,830 unique growers have applied for and received cultivation licenses in 2018, this represents a statewide grower participation rate into the legal regulated market of just 2.7 percent.

In other words, the black market where most of the growers remain is seriously thriving despite the ability to become legal.

In January of this year, Governor Brown predicted annual tax revenues going to California at $643 million for the first year of legal cannabis production and retail sales. Taxes on cannabis pertain to both growing and retail sales of marijuana and derivative products. 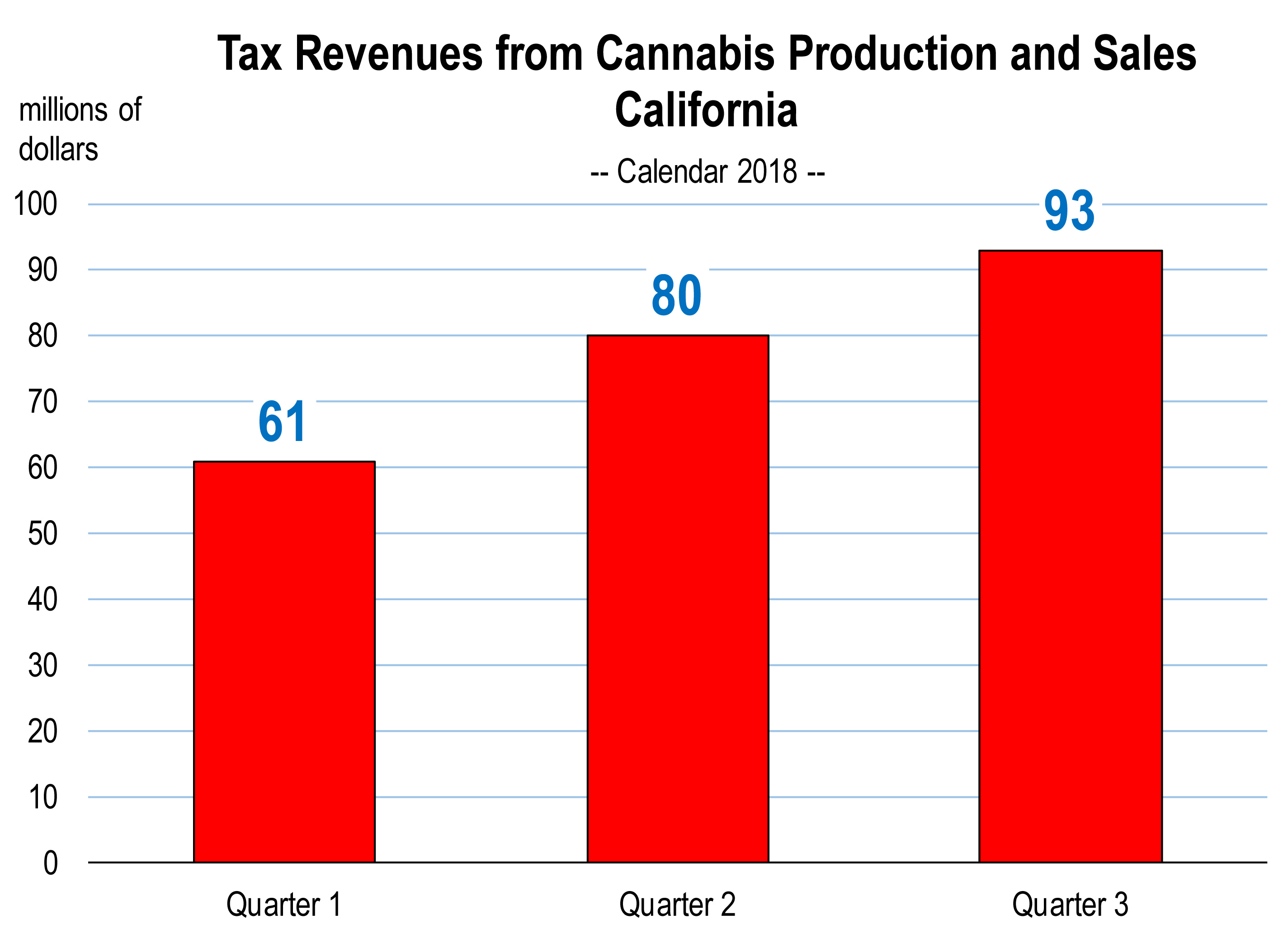 However, during the first 3 quarters of 2018, total tax revenue collection has fallen short of expectations. At the current rate of tax receipts realized through September, it’s likely that just over half of the Governor’s tax revenue goal for calendar 2018 will be realized.

Why? The lack of grower participation to date is the biggest reason, along with a scarcity of recreational use cannabis shops in California. So far, there are 416 storefronts that have been licensed to sell cannabis and derivative products for recreational use in California. Thirty five percent of these are located in the greater Los Angeles metro area. The Coachella Valley is number 2 with 32 stores in Palm Springs, Cathedral City, and Desert Hot Springs. San Francisco is third but with much fewer outlets.

Along Interstate 5 between San Francisco and Los Angeles, adult-use shops are nearly nonexistent. There are no stores in Fresno, Kern, San Joaquin, San Luis Obispo, Placer or Nevada Counties. And there are only a few shops operating along the Central Coast of California.

In general, there are not enough establishments that are now open to conveniently serve the state’s population and generate tax revenues for the state. Why? Local prohibitions on adult use marijuana stores are a principal reason. You can only buy legal cannabis products in legally sanctioned retail outlets if they are permitted in your city or county. Even though Proposition 64 was approved in 2016 by about 57 percent of the state’s electorate, most cities in California still refuse to permit marijuana businesses. About 84 percent of cities in the state have banned adult-use retailers, whether storefront or deliveries. Right now, only 77 cities in California allow recreational sales of cannabis. 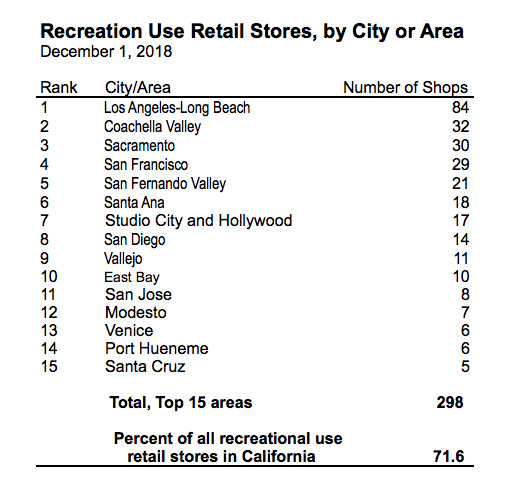 And then there is the price. Regulation and taxation is having a large impact on consumer prices. Though the wholesale price for leaf and flowers has fallen precipitously in the last year, prices for retail cannabis products in stores have not.

New packaging and testing regulations went into effect on July 1, 2018 and this has created confusion for regulated store owners, reduced product and increased prices.

And according to industry sources, the unlicensed (or black) market sells cannabis products for lower prices. In August, a marketing survey found that one in five Californians bought marijuana from black market sources and were “highly likely” to purchase again due to cheaper priced products, greater selection, and no tax.2

According to PriceOfWeed.com, this week’s average price per ounce for high quality marijuana is $256.63. For medium quality, the price drops to $207.13.3

The State of California has the second highest tax rate on cannabis growing and sales in the country, behind the State of Washington. Together with city and county taxes, the gross tax rate of cannabis products can go as high as 45 percent in California.

There was a proposal in the state legislature, Assembly Bill 3157, that would have lowered the state’s excise tax imposed on purchasers of cannabis from 15 percent to 11 percent for about three years. It also would have suspended the cultivation tax until June 1, 2021. But it did not have the support of Democrats and unions.

The first year for the industry has been bumpy as the regulatory issues become institutionalized and applied. Combined tax rates on cultivated product and on retail sales are comparatively high and compliance standards onerous. For this reason, most California growers remain in the unregulated market.

More regulations on packaging, product uniformity and testing and fewer retail storefronts throughout California (due to local city and county bans) are pushing final product prices to the upside. Consumers are still seeking out less costly products and the black market is still thriving.

California cannabis industry conditions are evolving and it’s likely that the environment for growers and retail sellers will improve, together with tax revenue collections for the state and for municipalities. But currently, the regulated market is struggling with grower licensing, retail product shortages due to testing delays and distribution issues, and higher product prices (than the black market).  So as the first year of legal cannabis growing and sales sunsets on California, the industry is still in a state of flux.

3 For a sample size of 21,179 transactions. See the home page of http://www.priceofweed.com 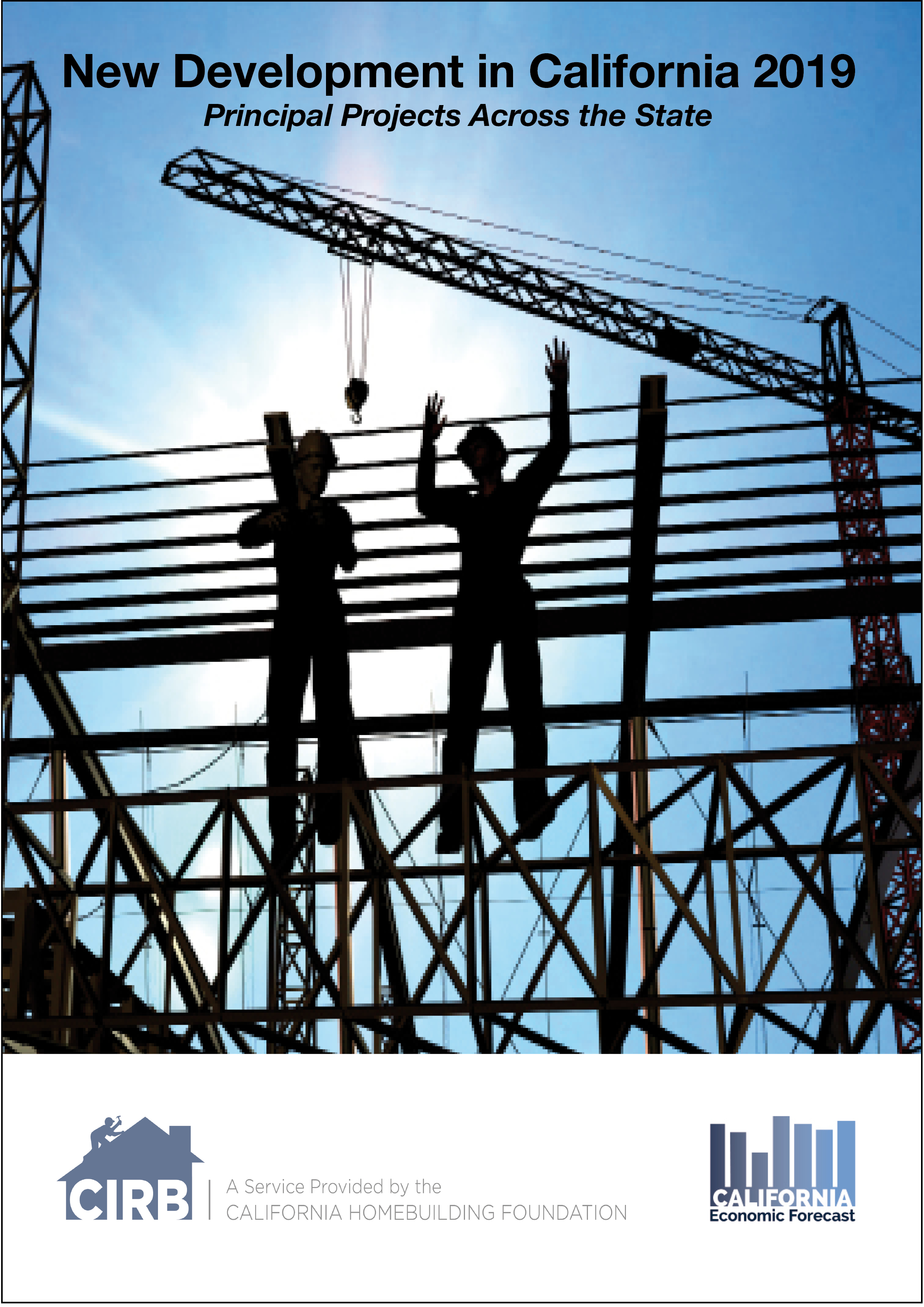 The 2019 Edition of the New Development in California report will be available in late December, 2018. For more info, view our website here.

The report documents the principal residential and non-residential building projects in California. This is a must-have report for all construction and building material contractors, and anyone who needs to understand the new development environment in California.