The Housing Crisis in California: A Simple Explanation

What’s the Cause of the Housing Crisis?

It’s being called a crisis because many people can’t obtain housing at current prices. But actually when this happens, it’s a crisis for the person seeking housing and a bonanza for the owners of rental and for-sale housing.

The law of supply and demand typically always prevails in markets that are mostly unregulated.

So here we are in the mostly unregulated housing market and due to strong demand and little supply growth, prices move exactly to where they should go, which is up. And why should they go up? To ration the existing housing and allocate it to those who can pay (which is how we allocate most goods in a capitalistic economy).

This sounds callas to many people, because there is an expectation that housing is a basic necessity like air and water and it should be more affordable. Well, it generally is. But not in Coastal California where (1) everyone wants to be, (2) where most of the jobs are, and (3) where building new housing is both limited and difficult (or near impossible) to navigate through the permitting process.

You can find much much much more affordable housing and plenty of it in Kern County, or Fresno County, or Colusa County, or Tucson, Little Rock, or Kansas City. There is no crisis in these housing markets and in the majority of the country.

But is the lack of supply the only reason for high prices in California, or I should say, coastal California? No. But the limits on supply are the principal cause.

Why? Because there have been increasing constraints on the development of housing imposed by legislation and court rulings since 1970. 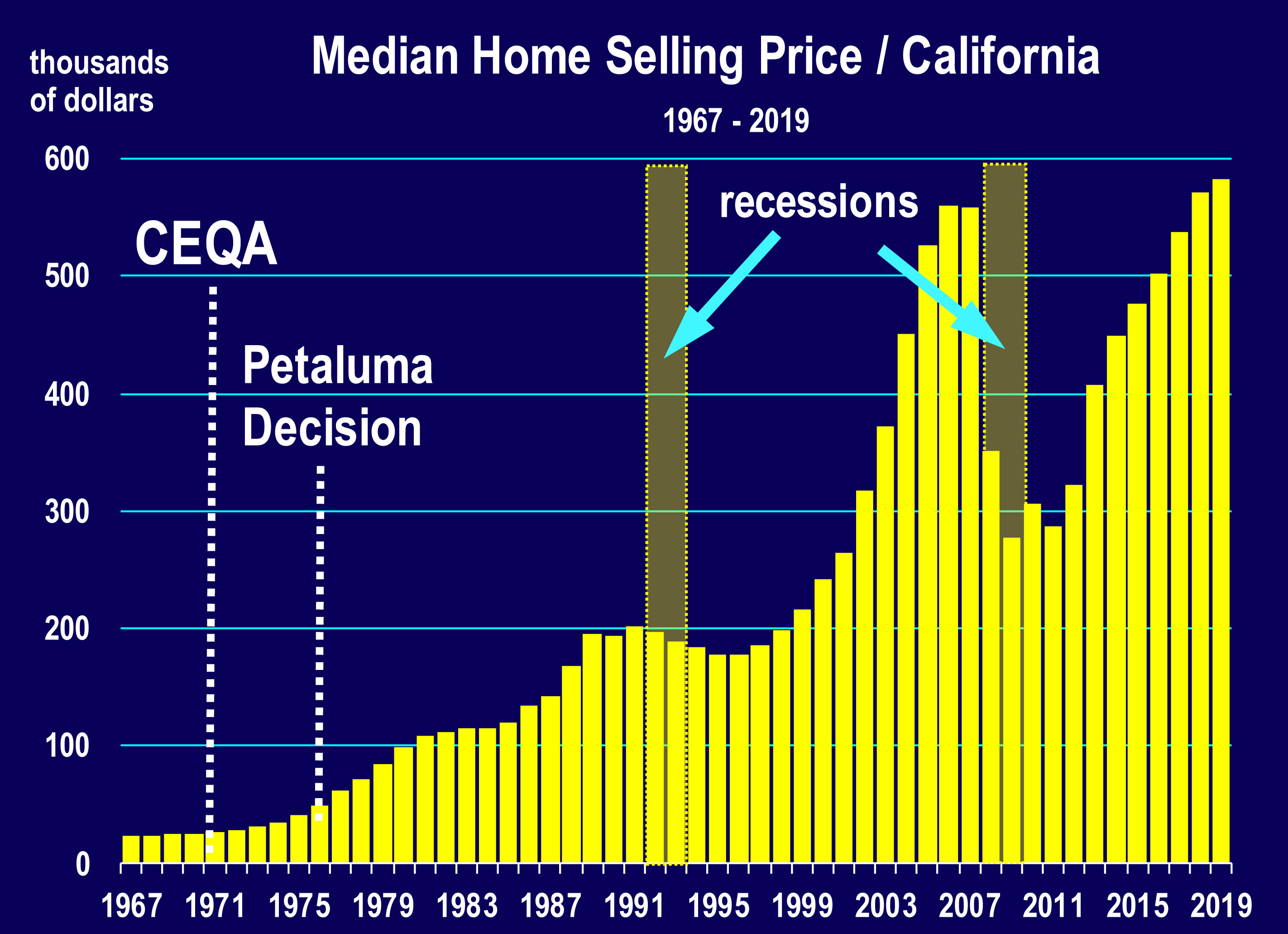 CEQA enables anyone the ability to litigate against homebuilding (or just about any building) in California. Lawsuits filed under CEQA against housing projects immediately delay them, increase their cost and increase the probability that they won’t get approved or built. Either that or the project is downsized. Therefore, less housing than originally intended is built, and this together with the efforts required to assure protection to the environment, increase the cost of housing.

In 1972 the City of Petaluma established a growth control on housing units, preventing the construction of approximately 50 to 67 percent of the housing units that would otherwise have been built in response to normal market demand. The City was sued. The suit ultimately made its way to the U.S. Supreme Court after lower courts found that builders were in fact injured by the City’s restrictive housing program. The highest court upheld the growth control.

This led to more cities adopting controls particularly in Northern and Southern California. And most coastal California cities have effectively restrictive measures embedded in their housing entitlement processes.

There is therefore significant inertia either against the development of housing, or towards driving up the cost of housing in California.

The desirability of coastal California increases demand and clearly, the growth of demand has been disproportional to the growth in the supply of housing. Consequently, predictable outcomes result with the price of housing. The great economic expansion of the 21st century has exacerbated that demand due to the prolific surge in job opportunities that have been created in California, and especially in the Bay Area and Southern California.

That’s it, a simple explanation of the housing crisis in less than 800 words.

What Can You Do About It?

Two things: (1) Wait for the next recession and hope it actually will soften the demand for housing (which recessions typically do), or (2) Move to Kansas City.

Even if the current level of demand abates, it’s unlikely to significantly impact housing prices and rents in Coastal California, but that all depends on the severity of the recession.