Economic Damage and the Outlook for the California Economy in Pandemic

In February while we were assessing the early economic indicators for the U.S. and California it became clear that the momentum from 2019 was pushing into 2020. Moreover, momentum was actually accelerating.

We thought the forecast for 2020 would be another year similar to 2019 when employment reached record highs, unemployment fell to record lows, trade was improving, manufacturing output was growing, and general economic sentiment by Americans was near historic levels of optimism.

Well, that condition rapidly turned on a dime. 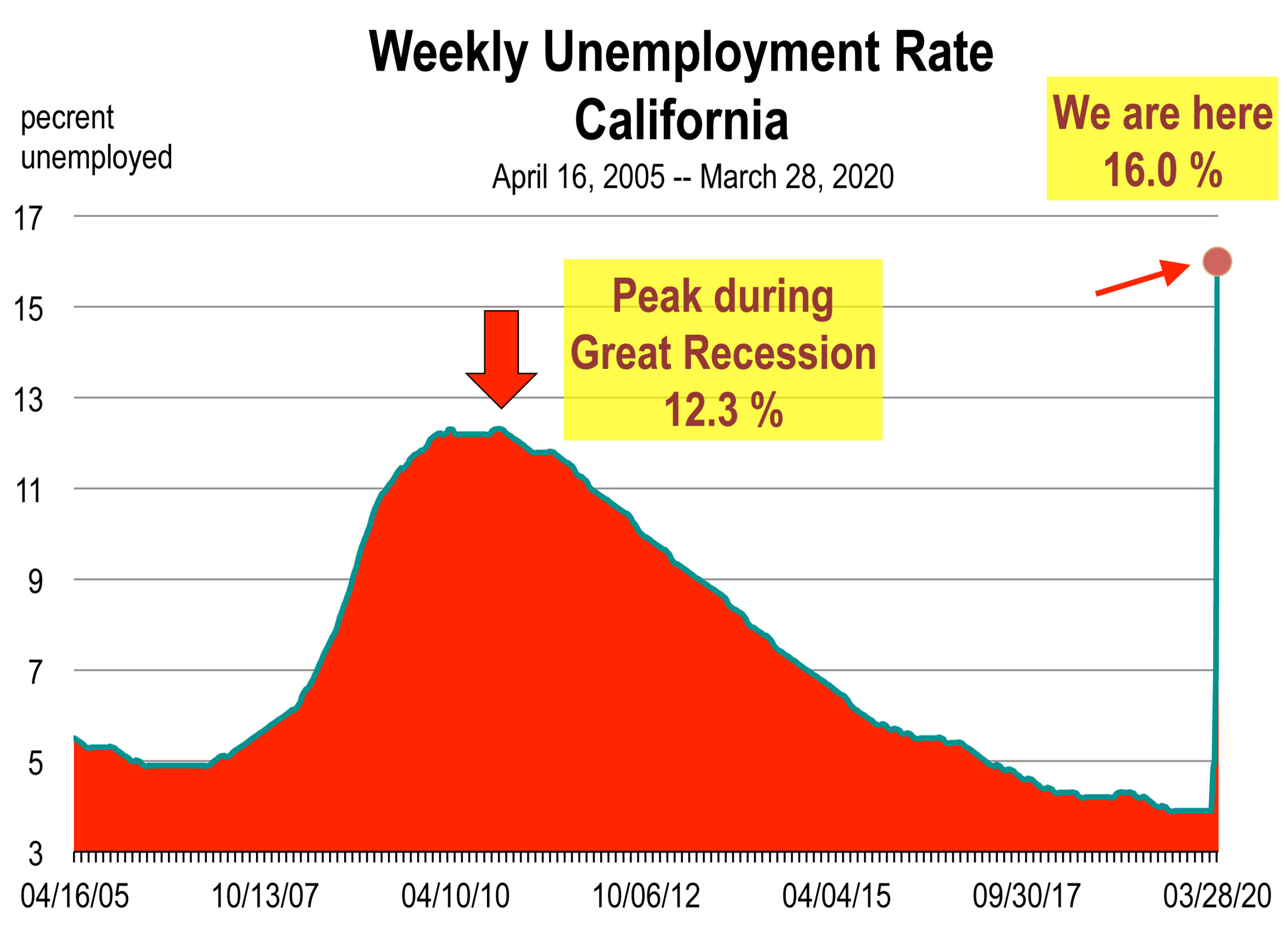 A National Emergency was declared by the Trump Administration on March 13. By March 15, Governor Newsom ordered shelter-in-place for the Bay Area, and 4 days later, for the remainder of the state. Everything closed and events were called off. Not just a few events, all of them. Only grocery stores and stores selling critical products to households and to workers who work from home remain open. Little else.

Many grocery items are intermittently scarce, except toilet paper which is always scarce. There is plenty of booze and oddly I can always get tomatoes but not garlic. Why is that? Pasta and rice and flour sell out quickly. More delivery trucks and larger loads are needed to supply grocery stores now that everyone is buying nearly all of their food there.

The unemployment rate (that we estimate for the latter part of March) surged and is now higher than during the Great Recession of 2008-2009. Five million jobs in California are at risk of being lost. Many of these jobs will remain on company payrolls and/or workers will be furloughed without pay, but an unknown number will be terminated.

So far, over one million workers have filed for unemployment benefits. These will remain elevated for the next week or two because there is likely a backlog of filings.

The rescue program passed by Congress last week will prevent many potential layoffs because it provides businesses with payroll relief loans for the next 2 ½ months. And down the road, the loans may be forgiven.

Airline travel has declined 74 percent. Flights through LAX have been reduced from 1,675 a week in mid-January to 431 this week.

Sales of new vehicles plunged in March, off 40 percent from sales in February. With most car dealers closed, sales of new automobiles can principally occur online, with little chance of kicking the tires before hand.

The amount of economic activity that has been concurrently shut down is both shocking and unheard of. 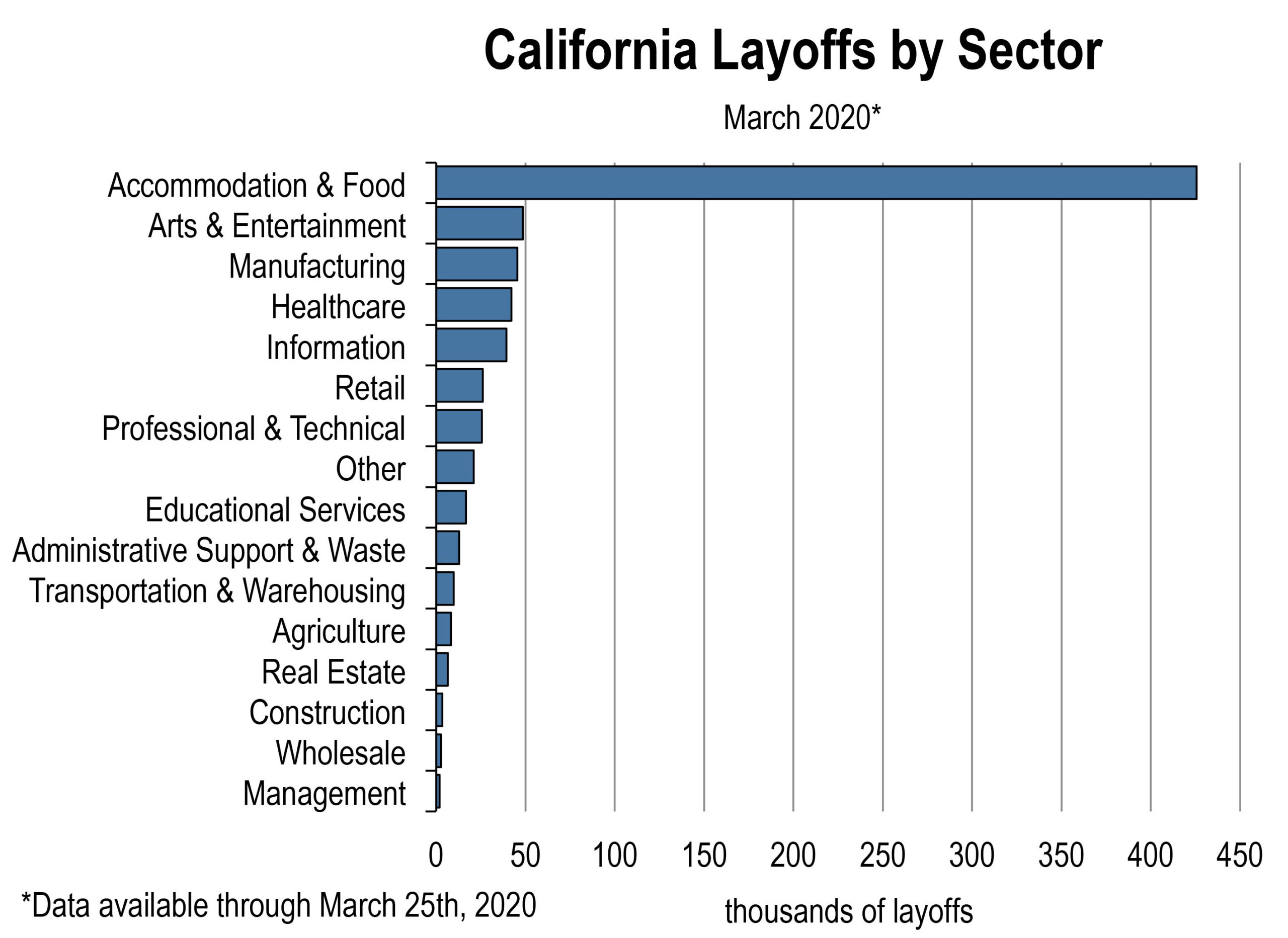 These activities will result in a massive loss of revenue, due to the lack of expenditure, and subsequent earnings by workers. All jobs associated with these activities are idled.

The vulnerable sectors of the economy in which the most jobs are at risk include recreation, leisure, and hospitality including food services, retail trade, manufacturing, and administrative business support.

Over 737,000 California workers were laid off in March, excluding self employed workers and independent contractors.

The Outlook for 2020 / An Early Assessment

The economic outlook changes because information underlying the principal assumptions seems to be changing rapidly, largely due to the policy response. Critical to the forecast is the length of time economic activity remains shut down in California and the rest of the nation. Tell me when we are allowed to go back to work and I’ll tell you what the forecast for 2020 looks like.

California and the nation remain in shelter-in-place through the month of April. Activity begins to return during the month of May. Events and travel begin to ramp up in June. That’s the optimistic scenario.

The pessimistic forecast is the result of a lengthier period of economic stagnation in which businesses can’t operate, people can’t go out, and travel and events don’t occur. Businesses can’t hold on and they fail. Supply chains move to alternative uses where revenue can be generated. Workers find alternative employment opportunities and don’t return to their previous jobs.

All of these unintended outcomes lead to a more lengthy economic recovery that further reduces household income, spending, and delays the return of the pre-COVID-19 world.

Watch for our regular updates of how the U.S. and California economies are responding to the tight restrictions put in place under the pandemic.

Follow our COVOD-19 page and you will be the first to understand the extent of the fallout and the first to see the beginning stages of the recovery.